The Film “No”: A Resounding “Yes” for Activists 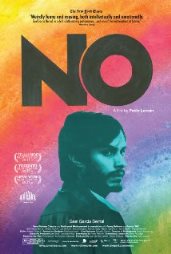 I could not name a mainstream, non-documentary film whose exclusive subject was how activists can win popular support for progressive change until this weekend—- when I saw the new Chilean film, “No.” Based on the true story of the 1988 plebiscite on Chilean dictator Augusto Pinochet’s continued rule, the film received flack from some Chilean activists who felt it deemphasized the role of grassroots movements in winning the campaign. But this criticism is misplaced. No is a unique film that openly analyzes what messaging strategies activists need to win political support from the non-converted. It particularly challenges the left’s common problem of speaking in terms favored by true believers but that alienate rather than win potential swing supporters. For activists seeking progressive change, No is not to be missed.

I was not going to see the new Chilean film No because I heard that it minimized the leading role played by grassroots and labor activists in the 1988 election that led to the ouster of the U.S. installed dictator, Augusto Pinochet. But such criticisms are not only wrong, but they miss the big picture about the film’s core goal—- which is showing how activists must use messaging that appeals to non-believers rather than simply to the existing progressive base.

A Future of Happiness

The movie’s plot is simple (spoiler alert: I will not give away any key plot developments in this story). After fifteen years as an unelected leader, international pressure forced Chilean strongman Pinochet to hold a plebiscite to continue his rule. Nearly all assumed that Pinochet would win the election, with some on the left believing that participation in such a “charade” would give the sure to win dictator new credibility.

But the film shows that Chile’s leading opposition parties saw the plebiscite as an historic and perhaps the only chance to remove the brutal Pinochet from power. The question that then takes up the heart of the film is this: what should be the campaign theme to encourage “No” votes in the plebiscite?

Considering that Pinochet murdered, kidnapped and tortured thousands in his fifteen year reign of terror, it might seem obvious that highlighting these abuses would be central to the No campaign. But the film’s lead character, a former leftist who has since joined a commercial advertising firm, sees highlighting past abuses as too negative. He raises his concerns and there is extensive back and forth about how best to reach the undecided voters likely to sway the election.

That’s how the No campaign launched a campaign that promised voters happiness and a brighter future, rather than focusing on the wrongs of the Pinochet era. For many leftists, such an approach was an outrage and a betrayal, as they felt it sugarcoated the ongoing repression. Their positions are given ample attention in the film, and were not without merit.

But connecting a No vote with a happier and brighter future made more sense because those upset about Pinochet’s reign were already voting No. As with most elections, it is the voters who lack powerful convictions who ultimately decide the results.

The film is not promoting a “selling of the President” message that, since Nixon’s victory in 1968, has seen commercial advertising techniques dominate presidential election advertising. Instead, it reflects the thinking that led to Ronald Reagan’s “Morning in America” campaign in 1984, Bill Clinton’s “Putting People First” effort in 1992, and both Obama campaigns—all of which saw the winner promoting an optimistic future while their opponents were left selling tough medicine to voters.

The closest any film comes to “No” is “Our Brand Is Crisis, the must see account of James Carville and U.S. political consultants backing the corporate candidate in the 2002 Bolivian election. But that great film is a documentary, and says less about political strategies applicable to other elections and more about the inapplicability of U.S. political techniques in South America.

To activists who still feel that No spent too much time on the advertising part of the campaign instead of profiling activist grassroots heroes, my response is that would be a different movie. This is not a documentary account of the 1988 campaign but rather a fascinating portrayal of a campaign component—-how to win majority support from a cynical electorate that expects little from government—with clear applicability to the United States.

“No” is a must-see for activists. It again shows that when we are looking for films that directly tackle real world politics in a serious and intelligent way, they are typically found outside the United States.