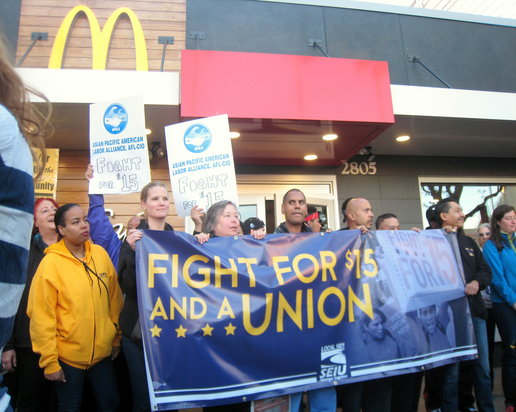 The Fight for $15 minimum wage campaign came to San Francisco in the very early hours of April 15.

Around 100 protestors assembled at 6am and then marched very orderly through the doors, packed the dining area and shut down for one hour the McDonalds in the heart of the city’s Latino Mission district, an area which itself is a focal point of the city’s gentrification and displacement of working class residents.

Speakers spoke inside with bullhorns, something that would have been unthinkable only a few years ago when arrests would have been certain. The political climate has dramatically changed in a very short time.

A majority of Americans support the message that was heard loud and clear today, “workers need a raise, a big raise!”

Among them also was SEIU international president Mary Kay Henry who announced to the cheering crowd that “Fight for $15 and a Union” actions were occurring in “125 cities across the world in solidarity with protests held in 230 cities in the U.S.”

Organizers pointed out this was the largest mobilization of underpaid workers in history.

Yet, even though $15 an hour represents a doubling of the pitiful federal minimum wage, all the speakers recognized it was only the beginning.

The common thread of the newly emerging movements like “Black Lives Matter,” “OUR Walmart” and “Fight for $15,” UNITE-HERE Local 2 Food Service Director Anand Singh told me, is that all our particular social concerns “come together by fighting against economic inequality, which is the next step enabling working people to make some gains.”

On that point, San Francisco’s widening income gap stands as the most extensive in the country and, a startling disclosure for many, it is actually rated in the world alongside Rwanda when using the World Bank’s poverty gap index.

As a result, the city’s character and composition are rapidly changing.

Figures bear this out.

For example, the Black community is at a new low of only 3% of the population with the largest recorded migration out of any city since post-Katrina New Orleans.

Meanwhile, the city calculated in the last 10 years that 6000 new residents making more than $100,000 a year had replaced 8000 Latino residents who left the Mission neighborhood in that same period of time.

Anticipating the changing neighborhood, even the Mission district McDonalds being protested got a seven-figure upscale makeover a few years back. It now has low-hanging soft lights, cozy lounge cubicles, attractive brown wood paneling and a minimalist version of the gaudy, yellow corporate logo; thus begging the question – don’t the workers deserve better?

The answer from protestors was loud and clear: “Hold the Burgers. Hold the Fries. We want our wages Supersized!”

Protestors left after one hour for more actions being held throughout the Bay Area on an upbeat and enthusiastic note with a slogan that one would think would be very hard to rhythmically chant and it is probably for this reason that I had not heard it before.

But, it worked today, time and time again, capturing the energy and determination of protestors – “I Believe! – that We Will Win!”

The social and economic justice movements of today can easily trace their origins to the Occupy Wall St. encampments that began on Sept. 17, 2011.

Their message of income inequality exploded unto the political scene like nothing seen before. After only three weeks, protests were happening in over 951 cities across 82 countries and in over 600 communities in the United States.

We owe a great debt to this movement. Its meteoric rise can truly be described as the century’s first political “Big Bang.” But Occupy Wall St. clearly also had some of the chaos and disorganization associated with that first cosmic explosion in nature.

Much has changed since, in a good way.

For example, the movements mentioned previously, “Black Lives Matter,” “OUR Walmart,” and “Fight for $15,” are much better organized than during Occupy Wall St. days.

The new movements today have a recognized leadership, a national and even international coordinated organizing strategy and a clear and focused series of demands.

These are huge political conquests, lessons learned from the best days of the labor, anti-Vietnam War, civil rights, women’s rights and gay liberation movements, yet, none of these were present during the exuberant days of Occupy Wall St where leadership, organization and coordination were frowned upon.

The demand for $15 an hour minimum wage is a good example of this progress. It is simple, clear, specific, easily understood and, very important, achievable. Though quite bold and in stark contrast to the cowardly timid proposals coming out of Washington politicians from both major parties, the slogan is still quite reasonable.

It, therefore, appeals to millions of Americans, captures the spotlight and becomes in many ways the focus of a national discussion about poverty and income inequality in America.

“We are turning the conversation,” executive director Tim Paulson, San Francisco Labor Council, told me, “away from attacking workers’ wages and pensions into supporting a living wage for all. It’s something that resonates with millions across the political spectrum and across every region.”

Nationally and internationally coordinated actions are also a major achievement for all these newly emerging movements. Ferguson activists are truly not alone and neither are WalMart or fast-food employees.

Another suggestion is for the three movements specifically mentioned in this article to each consider national conferences that could feature prominent guests from around the globe that share their common concerns of economic and social justice.

Again, labor unions regularly do this as have other past social movements.

It would be a good bet that thousands of young college and community activists would flood to a gathering that would give them a chance to be heard and a chance to further plan coordinated actions that have been so instrumental in growing the movement.

In any case, street protests are already doing a great job of linking issues of social justice, mostly affecting minorities and women, with economic inequality that affects male and female working people of all colors, thus laying the basis for a majority coalition that can change our country.

Carl Finamore is former pres. (ret), Machinist Local 1781 and their current delegate to the San Francisco Labor Council, AFL-CIO. He can be reached at local1781@yahoo.com