The Feds Make it Easier to Fit Bike Lanes on Streets

by Michael Andersen, Green Lane Project staff writer on May 9, 2016 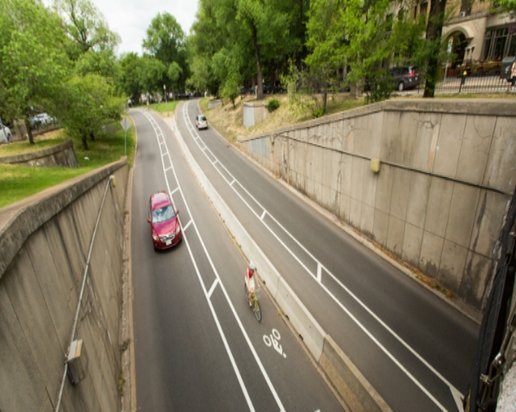 A large car is less than seven feet wide. But thanks in part to an obscure federal rule, millions of miles of traffic lanes on local streets around the country are 12 or more feet wide.

Lanes that wide, it’s now known, make urban streets less safe. They give many people a false “freeway” feeling behind the wheel, leading to speeding and worse. And for cities looking to boost the appeal of biking, wider lanes mean less room for buffers, planters and other separators that dramatically improve the biking experience.

But for road projects that get federal funds, dangerously wide auto lanes have often been suggested or required.

Though they rarely make headlines, the “13 Controlling Criteria” have loomed large in the work of traffic engineers across the country since they were adopted in 1985. The idea then was to create a simple, hard-to-break list of basic guidelines for street design: shoulder widths, grades, cross slopes and how close to the roadway an “obstruction” (such as a tree or post) would be allowed.

The criteria were well-intentioned. But today they’re a thorn in the side of many urban engineers, who say the rules were based on rural roads and freeways, not city streets. In urban environments, lower speeds, street trees, tightened shoulders and narrower travel lanes are often safer and more pleasant to use.

On Thursday, in the latest of a string of subtle but far-reaching progressive decisions over the last few years, the U.S. Department of Transportation sliced the list of “Controlling Criteria” on lower-speed streets from 13 to two.

For federally funded non-freeway streets with traffic speeds below 50 mph, only “design loading structural capacity” (how much weight a bridge can bear) and “design speed” (how fast traffic is expected to be able to move safely) are now tightly regulated. The change, which came after a months-long review and comment period, was effective immediately.

Among other things, this will make it much easier and cheaper for cities to stripe safer, narrower auto lanes and add protected bike lanes on projects that use federal money.

In an email last fall, Bill Schultheiss, principal engineer at Toole Design Group, recalled a run-in he had with the 13 Controlling Criteria on Massachusetts Avenue in Boston:

I had to prove bike lanes increased safety over a 12 foot or a 16 foot shared lane (the alternatives) because I proposed a 5 foot bike lane with 10.5 foot lane. I had to demonstrate that it would cost millions to purchase private property to widen the road, the wider lane wouldn’t improve safety for bikes, and the bike lane with narrowed lane was the best option. This project was an FHWA funded project, thus it had to meet the standard lane width criteria (which at the time was 12 feet on an arterial). The design exception report was 44 pages long and probably cost close to $10,000 to produce.  It took well over four months to move through the process, which delayed the final paving of the project somewhat. To the credit of MassDOT and the City of Boston, they were willing to do this.  In most other places, people don’t bother.

On Thursday, Jessica Roberts of Alta Planning + Design was among the first bike professionals to summarize the importance of the new rules:

This rule won’t affect every project, and many state transportation departments have their own similar rules that will remain in place. But this new flexibilty from the federal government will give states a reason to chip away at standards that were based on out-of-date science.

And it’ll spread the word that this is one of those times when — even in America — bigger isn’t better.

The Green Lane Project helps U.S. cities build better bike lanes to create low-stress streets. You can follow us on LinkedIn, Twitter or Facebook or sign up for our weekly news digest about protected bike lanes. Story tip? Write michael@peopleforbikes.org.

This piece first appeared on The Green Lanes Project.