The Fallacy of Taxes v Services 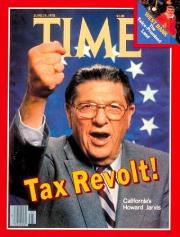 You see, voters aren’t really sure what they want. They say they want fewer services, but when it comes to choosing services that they would be willing to cut, well that’s a different story. When it comes to pretty much anything that costs a substantial part of our state budget, nobody wants to make any cuts.

However, when voters are asked whether state and local government spending in each of six specific program areas should be increased, reduced or left the same, there is much less support for spending reductions. Only small proportions of voter (between 8% and 15%) support less state and local government spending on the k-12 schools, mental health, road and highway building and repair, and law enforcement and police.

So, cut our taxes and reduce our services, except the services that we like, which are most of them. It’s a frustrating dynamic, to say the least, but it is a dynamic that the Republicans have been playing off for decades in California and beyond. It hasn’t been all that successful here, but it has worked very well elsewhere, and it is all they really have.

On another front, support for Prop 13 remains high. However, a big majority of voters would like to see the commercial property values reset on any property transaction, not just a complete sale. That change would be bigger than it sounds, as commercial property rarely changes hands completely.

This would shift the balance that had been shifting heavily towards housing. But, who knows if it would ever happen, the Chamber of Commerce is still strong, and would bust out “job killer” in under 2.5 seconds.

This piece first appeared in calitics