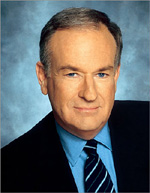 I’ve got a bone to pick with Bill O’Reilly and, as odd as it is to say it, my present complaint has nothing to do with his asinine political views. Rather, I’m quite upset with O’Reilly for permanently ruining one pleasing gastronomic experience. Thanks to him, I will never again be able to enjoy a falafel sandwich without picturing him naked.

Holy schnikes! It’s a frightening image, is it not? It’s almost indefensible to mention such a menacing character and such a delicious food in the same sentence. But like it or not, O’Reilly’s inability to distinguish a loofa from a falafel has forever damaged my desire for deep fried chickpeas.

As you may have read, one of O’Reilly’s producers has accused him of sexual harassment. Never slow to respond, O’Reilly has filed a counter-suit alleging that plaintiff Andrea Mackris tried to extort $60 million in exchange for keeping the story under wraps. Check any mainstream media source, and you’ll find all the details you’ll ever want to know about the scandal, except, of course, a description of what transpired between the two.

But for those of us seeking the sordid details, much more information is available. In one of its most notable feats of muckraking, The Smoking Gun has posted the full text of the Mackris complaint online.

It is in this report on p. 16 that you will find the highly offensive falafel statement. According to Mackris, O’Reilly’s longstanding penchant for phone sex led him to call her up one night and dive into a sexy scenario we’ll call O’Reilly’s Caribbean Fantasy. In O’Reilly’s Caribbean Fantasy, Mackris and O’Reilly have returned to their hotel room after a long day of drinking tropical cocktails and lazing under the Caribbean sun. The two end up in the shower together, where O’Reilly decides that the sexiest thing he can come up with is soaping up Mackris’ back with a loofa mitt.

Being semi-obsessed with bath products, I feel I possess enough authority on the subject to point out that loofas are roughly textured items used for exfoliation. But hey, back skin is pretty receptive to being scratched, so maybe it’s not so bad. And honestly, if O’Reilly disrobed anywhere near me, I’d want to turn my back, too. After loofa-ing Mackris into relaxation, O’Reilly details his plans to massage her boobs because “I like that and you have really spectacular boobs.”

There’s nothing like the word boobs to get things hot and steamy. One would think that a person possessing his public speaking skills could formulate a more convincing come-on. As his description continues, O’Reilly implies that his loofa mitts will soon be heading south, and I don’t mean Florida. According to the complaint, O’Reilly said, “And then I would take the other hand with the falafel (sic) thing and I’d put it on your [another-name-for-a-young-kitten].”

In the throes of passion, not only did O’Reilly allegedly choose a loofa mitt as a prop, he also managed to forget its name and sully a completely innocent food in the process. The damage has been done. And now, sadly perhaps for fellow falafel lovers out there, I’ve spread that damage to anyone who’s reading this.

Of course, there are more important things at stake than my enjoyment of falafel. There’s also the fact that O’Reilly sounds like the most boring lover on the planet. Most of Mackris’ complaint focuses on O’Reilly’s obsession with phone sex, which he claims to have used on many young women. At one point, O’Reilly supposedly implied his interest in a menage a trios, but that’s about most shocking thing in the entire document. Far from seeing his conduct as offensive or inappropriate, O’Reilly actually considers his bland but lascivious remarks and phone activities to be educational.

Of course, there is always the possibility that the entire scandal is, as O’Reilly has publicly claimed, an attempt on the part of a democratic campaign contributor, Mackris’ lawyer, to tarnish the fair and balanced reputation of “The O’Reilly Factor” and FOX News. If that were the case, don’t you think they would have come up with something a little hotter than O’Reilly’s Caribbean Fantasy?

You can reach Lorraine Sanders at lorraine@lorrainesanders.com.