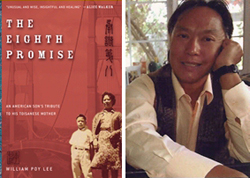 On Thursday, April 26th at 7:00 pm, author William Poy Lee will be reading from his criticalliy acclaimed book, “The Eighth Promise: An American Son’s Tribute to his Toisanese Mother”, at the Chinese Historical Society, 965 Clay Street in Chinatown. A beautifully written, evocative memoir of a relationship between a mother and son–and the Chinese-American experience.

In “The Eighth Promise,” Lee gives us a rare view of the Asian-American experience from a mother-son perspective. His moving and complex story of growing up in the housing projects of San Francisco’s Chinatown in the 1960s and ’70s unfolds in two voices–the author’s own and that of his mother–to provide a sense of tradition and culture. It is a stunning tale of murder, injustice, fortitude, and survival. Already, this exquisitely wrought memoir is garnering rave notices.

While many immigrants are focused on assimilation, Lee’s mother, Poy Jen Lee, came to America with a different agenda. In 1948, Poy Jen agreed to leave Suey Wan, her Toisan village in the Pearl River delta of China, to come to America as the wife of a Toisanese-American man. Before leaving, she made eight promises to her mother, among them that she’d find good husbands for her sisters and arrange immigration papers for her mother and brother; teach her children Chinese and Toisan customs, so they’d know their heritage; keep clan sisterhood strong; and cook traditional medicinal soups. The eighth promise bound Poy Jen to the fundamental Toisan ethos, “to live her life in complete compassion” for all people, her family, her Chun clan sisterhood and her larger community. In this remarkable memoir, mother and son, in alternating chapters, tell the story of their life in San Francisco’s Chinatown from the 1950s to the present.

Between American racism and power struggles in the Chinese community, it’s a tribute to Toisan endurance that Poy Jen not only held her family together but also brought her children back to China to fortify their clan connection. Fans of Amy Tan and Maxine Hong Kingston shouldn’t hesitate to embrace this formidable matriarch and the son she taught to cook her chi soups.

Salon Magazine’s Meredith Maran wrote of The Eighth Promise, “It’s a poignant story, many times told. Immigrant family arrives in America, begins lifelong tug-of-war between assimilation and cultural identity, struggles to find a foothold on the economic ladder, establishes a flow of information, cash, and visa sponsorships (and/or arranged marriages) between those left behind in the old country and those busily becoming citizens of the new.

Kids come home from school speaking English; parents answer in Spanish or Farsi or Cantonese. Parents eat menudo or lavash or jook for breakfast; kids slurp milk pinkened by Fruity Pebbles. Kids grow taller and more cynical than their parents, refuse to attend church or mosque or temple, leave home, marry or intermarry, serve as translators between their parents and their kids during bilingual holiday dinners, and cobble together a patchwork culture, an often-uneasy union of their customs of origin with new, Americanized traditions of their own.”

Despite a few minor unanswered questions in the book, Maran nevertheless considered The Eighth Promise, “a lively read and a significant contribution to the body of literature that continues to bubble up from the steaming cauldron that is the American immigrant experience.” On Thursday, April 26th, you’ll get your chance to get many of those questions answered in person!