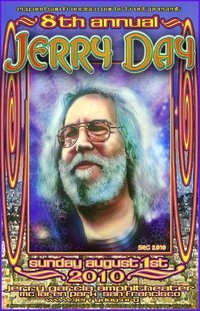 This Sunday, the Excelsior Cultural Group and the San Francisco Parks Trust will present the 8th Annual Jerry Day Celebration at the Jerry Garcia Amphitheater, located at 45 John F. Shelley Drive. The first Jerry Garcia / Excelsior celebration happended in 2002 as a fundraiser for Crocker Amazon Playground in Jerry Garcia’s childhood neighborhood – The Excelsior District. Spearheaded and conceived by Excelsior District natives and residents, this civic and cultural event is the largest event associated with the neighborhood. It’s wholeheartedly embraced by the community and the city. In 2009, the festival received the “Best Community Building Event Award” from the City and County of San Francisco.

Jerry Garcia, as most people know, was one of the biggest musical icons of our time, the leader of the Grateful Dead, and a native son of the Excelsior District who grew up at 87 Harrington Street. This community celebration of Jerry Garcia originated in 2002 and has since gained a wide range of support across the Excelsior District and Southeast Community of San Francisco.

Melvin Seals and JGB
Melvin Seals has been a powerful presence in the music industry for over 30 years with a long-established reputation as a performer, recording artist and producer. Melvin is most revered for his powerful, high-spirited, Hammond B-3 organ, and keyboards in the Jerry Garcia Band. Melvin spun his B-3 magic with the Jerry Garcia Band for 18 years and in doing so helped pioneer and define what has now become “Jam Band Music”. From blues to funk to rock to jazz, Melvin Seals serves up a tasty mix with a little R&B and gospel thrown in to spice things up. Melvin and JGB brings an intuitive, expressive style, soul, spontaneity and remarkable chops to the table. With acoustic and electric ingredients and unique combinations of Stu Allen’s guitar and amazing vocals, Jimmy Tebeau’s savory bass, Pete Lavezzoli’s hearty drums and, of course, a heapin’ helpin’ of the wizard’s magic on Hammond B-3 Organ and keyboards. Along with Shirley Starks and Cheryl Rucker on back-up vocals, the result is a most satisfying blend of natural organic grooves that challenges genre boundaries.

Their chemistry is the focus from which they create a spontaneous and high art where the sky is the limit musically. They offer an exciting, often psychedelic musical journey that changes nightly and keeps the audience dancing and smiling (and some staring in amazement) for hours. Adding his rock-gospel-soul-rhythm and blues touch with his funky style of playing, no wonder Jerry nicknamed him “Master of the Universe”. Melvin continues to treat music lovers to his unique brand of melodic flavor with JGB.

Front Street and Friends
Front Street, a jam band based out of the San Francisco Bay Area, emulates the feel, excitement and energy of the Grateful Dead at their peak. Fronted by Stu Allen, lead guitarist and vocalist for Melvin Seals & The JGB Band, this band is sure please even the most discriminating dead head. Band also features John “Stewball” Stewart on rhythm guitar (Jelly), Sam Johnston on B3/keyboards (Box Set, Buffalo Roam, Grapefruit Ed), Jeff Faust on bass (Dead Guise, Workingman’s Ed) and Mark Corsolini on drums (Dark Star Orchestra, Outlaw Family Band, Workingman’s Ed, Melvin Seals & The JGB Band). The member of Front Street are “friends” with, “shared the stage” with, or “been in bands” with so many great musicians over the years, they decided to invite many of them to sit in on Jerry Day. You never know who will show up… should be great fun!

Check Engine Light
Call it what you will: “the old folks” from the Neighborhood, from the “Family”, or even just Geezer Rock. “We’re just a group of old guys who get together to entertain our friends with music. We play some old familiar songs, some not so old: some original, some original takes on classics. Some of our songs are lost in space and time just like us…”

E. “Doc” Smith is a musician and recording artist with Edgetone Records, who has worked with the likes of Mickey Hart, Brian Eno, Madonna and Warren Zevon, among others. He is also the inventor of the musical instrument, the Drummstick. He can be reached via http://edgetonerecords.com/edoctorsmith.html