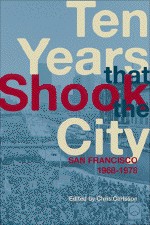 No single decade decides a city’s future, but the years 1968-1978 likely changed the identity of San Francisco more than any ten year stretch in the preceding sixty years. That’s why Chris Carlsson and Lisa Ruth Elliott’s new book, Ten Years that Shook the City: San Francisco 1968-1978 is so indispensable for anyone seeking to understand San Francisco today. The book’s collection of essays covers critical developments that forged a multicultural and far more progressive city, prioritizing events and movements often underreported at the time and little remembered today. San Francisco in 1960 was 82% white, its downtown commercial district was fading, and elite forces pushed dramatic transformations to the city’s economy. This book chronicles the resistance to such efforts, and describes how this opposition, the city’s changing demographics, and demands for greater civil rights and economic justice by students, gays and lesbians, African-American, Asians and Latinos helped make the San Francisco of today.

Since many people living or working in San Francisco did not grow up there, even those politically involved often know little of the city’s past. That is one of the many reasons this book on the 1968-1978 period is so essential. It relies on many first person recollections to shed valuable light on past events, giving readers both the author’s perceptions as events occurred and with the benefit of decades of hindsight.

The Rise of Multicultural San Francisco

Perhaps the most significant development for today’s San Francisco was the sharp increase in the percentage of non-white through the 1968-1978 period. The impact of this shift is brilliantly captured in the book’s opening essay on the 1968-69 San Francisco State Strike by Margaret Leahy.

Leahy provides far and away the best account of this struggle that I have read, and it is worth the price of the book alone (and the publisher, City Lights Foundation, is selling the 323 page book via its website for only $13.27, an incredible bargain). Leahy’s essay is so valuable for three reasons.

First, it is a first person account of a young Irish-American woman whose political outlook and life direction were permanently transformed by personal participation in an activist struggle. Leahy vividly details her fury at the police crackdowns against nonviolent protesting students, and her growing emotional connection to the desires by primarily African-American students for basic educational equity.

Second, those unfamiliar with the San Francisco State struggle may be shocked by the racist brutality of the police crackdown, which was more akin to what happened to peaceful protesters in Mississippi and Alabama than in the “liberal” city by the Bay. Even black police officers who comprised the Officers for Justice and joined the strike protests in solidarity with the students were attacked.

Third, Leahy reminds us that contrary to popular perceptions that focus on Chancellor (and later U.S. Senator) S.I. Hayakawa pulling the plug on a loudspeaker to curtail protests, the students and their allies won the strike. They did not get everything they asked for, but they got far more than they could ever have obtained absent grassroots mobilizing.

There are other essays on “third worldism in San Francisco,” from Latinos in the Mission to the battles by Filipino tenants at the International Hotel and Asian-American workers at the Jung Sai Garment Strike. Rachel Brahinsky has a very insightful piece on the “Rise and Fall of the Black Fillmore,” whose demise via Redevelopment Agency racism began prior to the upsurge in the city’s multicultural activism (by the mid-60’s, 4000 people had already been displaced and the larger area demolitions of black businesses and homes was already underway).

Brahinsky’s essay is among others that highlight the destructive role of SPUR—the San Francisco Planning and Urban Renewal Association in promoting redevelopment and displacement. It is a legacy that the group’s current leadership has tried so hard to correct that it even funded a museum exhibit at its new building to highlight its past wrongs.

Despite the Fillmore’s heartbreaking and life destroying demolition, by 1978 San Francisco’s historical status as an overwhelmingly white city was gone. The new forces on the rise would eventually change the city’s culture and politics.

The movements of the 1968-78 era also brought the city an artistic renaissance. Timothy W. Drescher’s, “Lost Murals of the Seventies,” includes several pages of colored photos showing murals either destroyed or lost when covered up by new buildings. Patricia Rodriguez’s, “Mujeres Muralistas,” takes its title from the name of the group of Chicana/Latinia artists in the Mission District who first created large-scale, woman painted outdoor murals. Rodriguez’s first-person account of how Mission muralists previously excluded women dovetails with the emerging women’s movement of the time (separately discussed in Deborah Gerson’s stellar, “Making Sexism Visible: Private Troubles Made Public”), and her and accompanying colored pictures really should be excerpted and taught in San Francisco high schools.

The book also contains several pages of remarkable political posters of the era and an accompanying essay by Lincoln Cushing. I reviewed Cushing’s outstanding Agitate! Educate! Organize! American Labor Posters in 2009 (written with Drescher), and the posters included in this work are truly rare finds from the era. All but one of the posters in Cushing’s essay are from Michael Rossman’s AOUON “All Of Us Or None” archive at the Oakland Museum, and activists should again thank the late Rossman for having the foresight to save these vital movement artifacts.

The Demise of Blue-Collar San Francisco

Many essays touch on this theme, but none better than in Jesse Drew’s “San Francisco Labor in the 1970’s.” If you lived in the city prior to the early 1980’s, this paragraph on the “sights, sounds and smells of San Francisco” of the 1970’s (which I must truncate due to space limitations), will bring back memories:

“One could smell the cloying sweet smell of white bread, as union workers moved tens of thousands of loaves of Kirkpatrick Bread from dough to ovens to market on 16th and South Van Ness. On foggy mornings, a thick corrosive mist of vinegar would descend over the vicinity of Best Foods on Florida Street, as union workers bottled mayonnaise and other condiments. Malt and hopes steam from the beer breweries made one nose’s flare, as would the acrid, burnt smell of coffee roasting in the MJB and Hills Bros coffee factories in the South of Market …”

Drew’s goes on to remind us of the Hostess Plant on Bryant, the Schlage lock factory in Visitacion Valley, and the “itinerant workers and bohemians” still hoping to find work at the ILWU hiring hall unloading ships. Levi’s Jeans were still made in San Francisco in the 1970’s, the last decade before office development and tourism drove the city’s economy.

But the essay most missing is a straight political history of the Joseph Alioto mayoralty (1968-75) and its “pro-growth coalition, as well as the grassroots, multi-racial campaign that brought George Moscone victory in 1975. While bits and pieces of City Hall’s role in the “ten years that shook the city” appear in numerous essays, it would have helped readers unaware of the era’s political history to learn more about these contrasting political forces.

Chris Carlsson has perhaps done more than anyone to revive San Francisco’s forgotten history, and he and his co-editor Lisa Ruth Elliot have performed an enormous public service by editing this book. With this great success behind them, I hope both are up for a follow-up book on the 1979-89 years. This period saw the passage of the city’s most important land use laws, the rise in gay and lesbian political power, and the strengthening of the “neighborhoods v. downtown” political divide. And it ended with an event that really shook San Francisco, the 1989 earthquake.