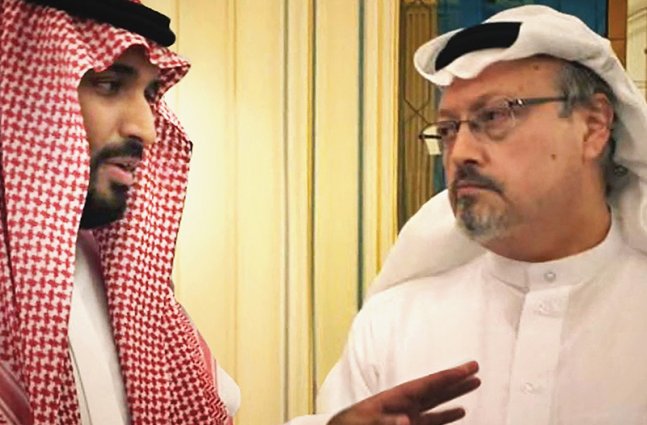 Bryan Fogel’s highly disturbing documentary “The Dissident” powerfully takes the “modernizer” shine off MBS and also inspires far less flattering words to describe the Saudi Crown Prince.  These words include “snake,” “deserves eternal side eye,” “probably murderous mastermind,” “ruthless,” and “buys off or kills his critics.”  MBS admittedly does not make a personal appearance in Fogel’s film.  Yet his shadowy presence falls over this documentary and the heinous murder it depictts.

The murder of Washington Post journalist Jamal Khashoggi, the film’s titular dissident, may have made worldwide headlines.  Yet the utter lack of transparency in the Saudi Arabian investigation and punishment of Khashoggi’s murderers mocks the Saudi government’s public claims of wanting to see justice done.  Fogel shows damningly how a constantly changing official story and suspiciously timed delays and obstruction makes clear the Saudis care more about concealing the truth than revealing it.

“The Dissident” mostly eschews the true crime documentary approach of chronologically listing the events leading up to Khashoggi’s cruel death.  Instead, it deliberately jumps around in time and space.  One minute, the viewer is in Montreal three months after the Khashoggi murder.  Another minute goes back years to the taping of a Turkish television interview with Khashoggi, which gets interrupted by a stray cat suddenly jumping into the late journalist’s lap.  Fogel’s temporal leapfrogging helps build viewer suspense in wanting to see how these moments are possibly related to Khashoggi’s murder and its aftermath.

The film’s Montreal segments focus on a 27-year-old Saudi national named Omar Abdulaziz Alzahrani.  He had previously worked with Khashoggi on some projects.  But even before meeting the late journalist, Alzahrani had already come under the baleful gaze of the Saudi authorities.  His crime was being an outspoken critic of the Saudi government, particularly the ruling family.  It didn’t matter that Alzahrani’s Twitter following only numbered 100.  Having a different opinion from the official line was enough to merit the government stink eye.

Journalistic practice in Saudi Arabia has little to do with afflicting the comfortable.  The blessing of the ruling elites is needed before one can become a professional journalist in that country.  Praising the Saudi government’s every action constitutes standard journalistic practice.  Even Khashoggi’s public criticisms of the Saudi government were pronouncedly polite.

It would be wrong to claim the late journalist was also cowed by Saudi government pressure.  Peers interviewed in the film praise Khashoggi as a true journalist.  But he was also a former insider who had spent thirty years working for the Saudi government, so he understood the realities of how that government worked.  Khashoggi’s reporting may have helped outsiders understand Saudi Arabia better.  But turning a blind eye to some very real problems in the country definitely didn’t fit into Khashoggi’s reporting package.

The late reporter’s honesty probably played a major part in the eventual estrangement between Khashoggi and MBS.  The Crown Prince likely didn’t appreciate that the same man who praised his reform efforts also criticized his ambition and the ways he used his expanded political powers.

Yet the planning and execution of Khashoggi’s murder can’t reasonably be called the product of heated passions.  15 Saudi officials came to Turkey on short notice to carry out the murder with the assistance of three Saudi consular officials.  Leading the visiting officials was Moher Muatreb, who just happened to be part of MBS’ security team.  Also among the group was the forensic specialist al-Tubaigy, whose expertise would have come in handy for best practices in criminal corpse disposal.

Details of Khashoggi’s murder, such as the description in the previous paragraph, come from Turkish government sources.  The film’s principal interviewees are the veteran 20-year chief prosecutor Iwan Fidan and the forensic expert Recep Kilic.  They walk the viewer through what they can reconstruct of the reporter’s murder using a combination of CCTV footage, maps, and most importantly transcripts of phone calls and conversations made by Saudi embassy staff.  Turkish intelligence can be thanked for recording and transcribing these dialogues.  Fogel doesn’t ask why Turkish intelligence wiretapped the embassy’s phones in the first place…and perhaps neither should the viewer.

What Turkish officials have been able to figure out feels particularly impressive given Saudi government efforts to stonewall or otherwise hamper the investigation.  The Saudi government’s explanations for Khashoggi’s death (e.g. fist fight, adverse drug reaction) grow more and more ludicrous.  It’s extremely unlikely the Saudi consulate’s long delay in allowing Turkish police investigators to look for signs of Khashoggi’s demise was anything other than an attempt to remove any physical evidence of the murder.  Ironically, Kilic’s team did find signs of suspicious blood spray anyway.

Khashoggi’s steps into the Saudi consulate where he met his end had been intended as his first steps into a new life.  His planned marriage to scientist Hatice Cengiz depended on obtaining a legal document from the consulate.  Those prospective nuptials would have marked a turning point for this former government insider.  Going into self-imposed exile came with the emotional cost of permanently losing ties to his wife and children in Saudi Arabia.  Cengiz’ account of her relationship with Khashoggi brings home how her presence re-awakened the playful and happy spirit of the reporter amused by a cat jumping into his lap.  The image of Cengiz in the La-Z-Boy chair Khashoggi bought for what would have been their new apartment conveys a sense of the degree of her personal loss.

Turkish intelligence transcripts show the planners of Khashoggi’s murder saw the late reporter as a prospective lamb coming to be slaughtered at the consulate.  The man who warned Alzahrani to be careful when meeting two representatives of MBS had his own caution tamped down by personal happiness.

The aim of Alzahrani’s meeting with MBS’ representatives was the purchase of his voice.  At the time of the meeting, the young dissident’s popularity had been rising in the Saudi Arabian social media world.  Malik and Abdullah, the MBS men who came, tried to appeal to Alzahrani’s vanity by calling him the new voice of Saudi youth.  They also promised a supposed glittering media career back in Saudi Arabia.  The “or else” part of Malik and Abdullah’s offer came via the presence of Alzahrani’s brother Ahmed, who wasn’t imprisoned…yet.  After Alzahrani eventually rejected the offer, Ahmed and 23 other people were arrested.

Arrests of critics or critics’ relatives turns out to be just one of the Saudi government’s tools for tamping down internal dissent.  Another method is the government sponsorship of Twitter troll farms.  Ordinary Saudis use Twitter at a rate at least triple that of Americans’ use.  For these users, the social media platform provides an avenue for sharing uncensored information or at least receiving fact-based information and viewpoints the Saudi government dislikes.  But the government troll farms successfully worked the Twitter system so well strongly pro-MBS and the royal family topics regularly trended.  Alzahrani’s name for these trolls, the flies, feels appropriate given that flies thrive around garbage and excrement.

Khashoggi’s work with Alzahrani came out of an interest in the possibilities of social media to bring about change in Saudi Arabia.  One such project was a counter-government Twitter user swarm nicknamed the bees.  That project eventually proved successful, but the Saudi government’s resources would outlast those the bees could muster.

“The Dissident” frighteningly shows that an “oh, it’s happening elsewhere” complacency is a dangerous attitude to take regarding MBS’ Saudi Arabia.  Fogel’s film chillingly shows the Saudi government has no compunction about stepping far outside its country’s borders to crush dissenters it perceives as threats.  Alzahrani has received threats of a hit squad targeting him and has been subjected to something worse which will not be revealed here.  Saudi bankrolling of repressive Middle Eastern governments played an influential part in the fizzling out of the Arab Spring movements.  The public leaking of personally embarrassing news about Jeff Bezos had a strong connection to his perceived insufficient support for MBS.

MBS may publicly make noises about wanting to modernize Saudi Arabia.  But it’s clear from his courting of foreign investors that he’s more interested in material modernization rather than cultural or political modernization.  The Crown Prince may claim he’s using the EU as his model for Saudi Arabia’s future.  But his ruthless crackdowns on opponents of any stripe suggests his real modernization model is Mainland China.

A clip from an American television interview shows MBS denying on camera that he killed Khashoggi.  The Crown Prince even adds the “I run a big organization but even I don’t know everything” line.  Not coincidentally, the official line from the Saudi government has been that Khashoggi was allegedly killed in a rogue operation and that his killers have already been tried and imprisoned.

But there are a few inconvenient considerations hampering the neat picture proffered by MBS and the Saudi government.  Not knowing everything about an organization’s activities is far different from not having specific personal interests in certain activities of an organization, such as the results of the (hypothetical) latest spying on Khashoggi.  Turkish investigators found that the consulate murder trail included a stop at a videoconferencing set-up.  It’s hard to believe either that the videoconference set-up wasn’t on during the killing of Khashoggi or that somebody important wasn’t on the other end of the call.  UN Special Rapporteur Agnes Callamard, who investigated Khashoggi’s killing, found that eight of the reporter’s killers arrived in Turkey before the murder on a Saudi government-owned private jet.  Two of the perpetrators even had diplomatic passports, essentially making the murder an action of the Saudi government.

At this point, though, Cengiz’ civil suit against MBS and others marches on in the American court system.  MBS himself has still escaped public accountability despite ordering Khashoggi’s murder.  Alzahrani has found a different route for publicly criticizing the Saudi government.   And MBS’ dissident crushers still employ a particularly nasty tool (which will not be spoiled here) against its vocal and popular critics.

(“The Dissident” will theatrically premiere December 25 and be available on VOD starting January 8, 2021.)