The Devil Made Her Do It 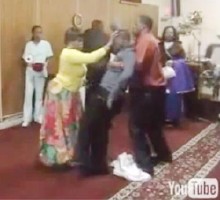 It’s like a bad scene out of a grade B horror flick or a front-page story in one of those sleazy supermarket rags, only it’s not funny: the Rev. Patricia McKinney and other elders of the Manifested Glory Ministries in Bridgeport, Connecticut performing an exorcism or a “casting out of spirits” on a gay teen in order to drive out what they claim are “homosexual demons.”

LGBT youth advocates are describing what happened to the 16-year-old as abusive.

“I think it’s horrifying,” Robin McHaelen, director of True Colors, an LGBT youth group, told the Los Angeles Times. “What saddens me is the people that are doing this think they are doing something in the kid’s best interests, when in fact they’re murdering his spirit.”

McHaelen, who says that the boy has been subjected to three exorcisms, will be contacting the Connecticut Department of Children and Families about the incident, so that authorities can investigate what happened.

True Color’s Kamora Herrington said of the exorcism, “This happens all the time. This is not isolated.”

Rev. McKinney, who is a self-professed “prophetess,” said that the boy is 18 and wanted to be cured of his homosexuality. She added that the church gave him clothes, since he was cross-dressing.

“He was dressing like a woman and everything,” she told the Associated Press. “And he didn’t want to be like that.” McKinney says that while she has “nothing against homosexuals” except our “lifestyle,” a man should be with a woman and visa versa.

Now, the prophetess feels that she is being persecuted: “It’s been a hard time for me, but I’m looking good and I’m standing strong, because when you have a mandate like mine you’re not going to say what you want without the adversary coming after you,” she said on her weekly radio show (how do these people get air time?). “If you are a true prophet you’re not going to be popular with the people.”

Especially when you go around subjecting gay kids to such nonsense.