The Decline of Organizing in the Obama Era 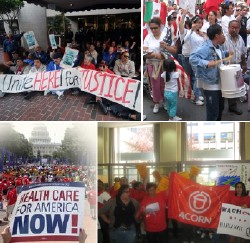 Since the election of our first ex-community organizer as President, organizing for progressive change has declined. The reasons range from sharply reduced funding for organizers, to complacency after Democrats’ sweeping 2008 victories, to labor unions being forced to focus on protecting current workers from contract givebacks rather than organizing new members. The net result is that grassroots organizing – which prioritizes face-to-face contacts with the unconverted, empowers people rather than simply asking them to fulfill a task, and builds local coalitions for pressure campaigns targeting politicians – is being replaced by less effective e-mail mobilizations and other short-cuts. As the midterm elections approach, progressives face a critical choice: either spend resources now on funding organizers who can win real change in 2010, or invest in the November elections to set the stage for 2011. The choice should be clear.

After electing Obama and strong Democratic majorities in Congress, many activists argued that a large number of Obama campaign organizers should be retained to expand upon, and mobilize, the grassroots base for change.

Instead, Obama created Organizing for America (OFA), which hired less than 100 fulltime organizers instead of the minimum 250 (and preferably 500) needed. Even worse, its mission was compromised from the start by operating under control of the Democratic Party, which meant that it could not organize pressure campaigns against the wavering Democrats whose votes were needed on health reform and other issues.

Obama’s team dissolved the greatest organizing cadre progressives had seen in years. And it did so as other resources for grassroots organizing were being lost.

First, foundations took a big hit from 2008’s stock market fall. This reduced new organizer funding in 2009, with an even bigger drop in 2010, since many positions for 2009 were placed prior to the economic crisis.

Second, foundation funding for progressive groups always declines after the election of a Democratic President. Funders back organizing to repel hostile actions by Republican Presidents, but have been far less willing to fund organizing that pressures Democrats to perform.

Third, major sums were raised in recent election years for community organizing around voter registration. This funding disappeared after the 2008 election.

In addition, the great voter registration success of 2008 had two other negative fallouts. First, the false “scandals” raised by the right-wing media machine surrounding ACORN’s voter registration has scared foundations away from funding organizing connected to voter registration. Second, these scandals decimated ACORN, the organization that for years hired the most organizers.

There are no reported figures for the difference in organizing dollars spent between 2008 and 2009, but it would be in the millions, if not the tens of millions.

Labor is aggressively mobilizing its members to resist employer attacks, but this has left fewer resources for organizing new workers or devoting organizing staff to intensive community organizing campaigns.

Of all groups, labor has learned the limits of funding elections over organizing. It has won passage of none of its top priorities after spending $120 million on Democrats in 2008, and would appear far better off in investing in organizing now rather than hoping for better results in 2011 from Democrats they back this November.

SEIU is spending far more resources on politics and media-driven corporate accountability campaigns – against such targets as Goldman Sachs and Bank of America – than on organizing on the ground in targeted grassroots campaigns against wavering Democrats. SEIU won 300 new members at HCA Hospital in Las Vegas last week, but has no active health care drives for new members in California and few if any others nationally.

Along with running contract campaigns and hotel boycotts in several cities, UNITE HERE is organizing hotels in Indianapolis, San Francisco, Chicago, Seattle, New York, Los Angeles and other cities. It has also mounted an ambitious campaign against non-union Hyatt Hotels, and is also organizing food service and gaming workers, recently winning new members in casinos around Sacramento and Pittsburgh.

But with other union organizing drives are stymied by Congress’s failure to enact any version of EFCA, the AFL-CIO, SEIU and other unions either invest in organizing now or lose an historic opportunity to rebuild labor’s membership.

But as Honda’s colleague, Congressmember Luis Gutierrez, noted, Obama devoted “two minutes” of his State of the Union speech to the issue, and “did not go far enough.” After millions took to the streets in 2006, where is the grassroots organizing to force Congress and the President to act?

Labor and religious groups provided major organizing support for the 2006 marches, and while the former is stretched thin, the latter’s organizing has not been visible in the past year. The thousands of community-based groups comprising the immigrant rights movement appear to be victims of the same foundation funding cutbacks reducing organizing on all issues.

The Center for Community Change has tried to galvanize grassroots action by promoting a march from Florida to Washington DC by four students directly impacted by the lack of immigration reform. Sponsored by Students Working for Equal Rights, the Florida Immigrant Coalition, and Presente.org, the Trail of Dreams is the type of organizing strategy that must be replicated nationally for comprehensive immigration reform to pass.

But that will take resources that are increasingly scarce. And as we face the 2010 midterm elections, funds desperately needed for organizing a mass, multi-racial constituency for immigration reform could instead be diverted to election campaigns.

During the Bush years, few disputed that resources had to be targeted toward changing our political leadership. And what made 2008 so special was that funding for community organizing was integrated into the Obama campaign.

But having yet won little from the 2008 victories, campaign donors, progressive groups and activists should reassess this electoral strategy. It appears far more important to spend resources on organizers now that can help win real change in 2010, than to withhold such funding for the midterm elections.

If you care about creating a path toward legalization and citizenship for the currently undocumented, focus on funding the organizing of a broad-based legislative movement for change now.

If you want real health care reform, give now to Democracy for America, the HCAN coalition groups, and the other organizations that invested heavily in organizing and got great results on the ground – only to be betrayed by Democratic Party leaders.

The great organizer Fred Ross Sr. once described the importance of the often time-consuming process of community organizing by saying, “short-cuts usually end in detours which lead to dead ends.” Ross would be the first to recognize that e-mail mobilizations have their place, but cannot substitute for empowering people and building power through organizing.

That’s the lesson I thought all progressives learned from 2008, and should remember now.

Investing in organizing and winning real change for people now is also the best strategy for success in November.

Randy Shaw is author of Beyond the Fields: Cesar Chavez, the UFW and the Struggle for Justice in the 21st Century.