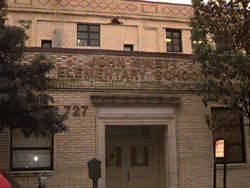 At a press conference yesterday, District 5 Supervisor Ross Mirkarimi held up poster showing the school district’s plan to have administration offices at John Swett Alternative Elementary School, which would result in the close of the school. Held at the Public Utilities Commission, community advocates, teachers and parents were in attendance to voice their concerns – all speakers urged the San Francisco Board of Education to rescind their vote to close John Swett.

The Board of Education set criteria for deciding which schools would be closed, but those at the press conference argued John Swett does not meet those guidelines. There is no declining enrollment, for example — the school functions at more than 80 percent capacity. And, their test scores are not low enough do not warrant closure.

“This closure is simply illogical,” said Supervisor Mirkarimi. “This is the kind of school to be proud of.”

Speaker Pro Tempore Leland Yee said there are little options for San Francisco families who want to stay in the city. It is vital, he said, to encourage children to remain in the public school system.

“We need to plan for the future to survive,” said Yee, who too recommended that the board rescind their vote.

Reverend Cecil Williams of Glide Memorial United Methodist Church spoke of how the closure would affect members of his congregation. He said that children need to be our city’s priority, and it is imperative that the community does not allow the closure to happen.

The California Public Utilities Commission (CPUC) has sustained a 15-year relationship with John Swett. CPUC employees volunteer their time to tutor kids, which is estimated at a total of 1000 hours each school year. They help fundraise and have donated computers, as well as uniforms for students who cannot afford it.

Retired John Swett teacher Ms. Frankie Jefferson believes that with the school closure, many children would not be exposed to great programs. The school offers children a selection of art classes like music, drama and dance.

“They come to us at John Swett as individuals, but leave as a group,” said Ms. Jefferson. “It would be cheating our children to close the school.”

Volunteer basketball coach Dawayne Baker said that he was speaking with a “heavy heart.” The thought of closing the school is blatant disrespect to the community. Many of his kids will probably attend private schools next school year.

John Swett is a very diverse school that primarily educates children from low-income families, which are typically minorities. The 220 kids who attend the school will have to find their own way to John Muir Elementary School. Safety is a crucial concern for parents. John Muir is located at Webster and Oak Streets, more than a mile from John Swett at Golden Gate and Franklin Streets. Crime in the Western Addition neighborhood is very real and very risky for children. Gangs and drugs are frequent around that area. Many parents do not have cars and would likely have to bus their kids to school.

Grandmother Sallie Scott’s children have all attended John Swett. With the closure she said families have little options because they cannot afford to send their kids to private school. John Muir classes also start later than John Swett, which is another added cost to families who maybe forced to pay for daycare.

“John Swett is a safety zone,” said Scott. “There’s not even a crossing except at Fell Street.” Assembly member Mark Leno sent a representative to speak on his behalf; he advised the board to rescind there vote as well.