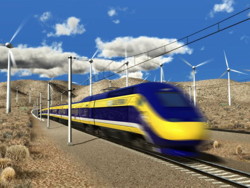 Over the past two weeks, the San Jose Mercury News has raised new questions regarding the job projections associated with high speed rail in California (here and here). This questioning should be welcomed, including by the proponents of the project. Job projections are undertaken for most major infrastructure projects in California and the United States, generally utilizing input-output models intended to capture job impacts throughout industries. Despite the complex modeling, the projections are more art than science.

Recently, I reviewed ten projections associated with a range of infrastructure investments in California and the United States. The projections varied widely in the number and types of job years estimated for each $1 billion spent in investment. Some of this variance was due to the different types of infrastructure (water, transit, highway), and some was due to whether the jobs were in the region, state or nation. Yet even controlling for these factors, the estimates for direct construction jobs, indirect jobs (i.e. suppliers) and induced jobs (jobs created as project expenditures spread throughout the economy) yielded varied estimates for job years per dollar spent.

The California High Speed Rail Authority (CHSRA) estimates that the high speed rail construction will generate 6600 construction job years for each $1 billion spent. This falls roughly in the middle of the projections. Similarly, the CHSRA estimates that the project will create around 13,400 indirect and induced job years per $1 billion — which falls also around the middle of projections.

The Mercury News criticizes the draft 2012 Business Plan for its references to creating hundreds of thousands of jobs, rather than “job years”. In the introduction to the job discussion in Chapter 10, the Business Plan does refer to “job years” and define the term — full time employment over a single year. “Job years” is the correct standard, as it avoids over counting workers who may work one or two days on a project. However, at several places in the Business Plan and accompanying Fact Sheet, the Authority does use the shorthand of “jobs”. This needs to be cleaned up for the Final Draft, as it can be misleading as to the number employed at any one time.

Using the estimate of 6600 construction job years per billion, the Central Valley Initial Operating Section (IOS) priced at $5.8 billion will create roughly 38,280 job years for construction-related direct employment. As the IOS will be built over a 5 year period, the number of workers employed at any time will fluctuate as the works ramps up and down. On average, using the Authority estimates, the IOS will be employing roughly 7000 workers at any time.

This employment will by no means “solve” California’s 11.3% current unemployment rate. However, two observations might be put forward on IOS employment impacts.

Second, even more than the direct employment, if the Authority’s Small Business Plan currently under consideration is properly structured, the Central Valley economy will benefit from developing an expertise in high speed rail construction. The Central Valley segment is the first segment to be built in the United States. Businesses, including environmental, design, and construction management—that work on this first segment will be positioned for work on other segments in California and throughout the country, possibly the world.

The Mercury News is correct that the project stands or falls on criteria beyond employment. The main decisions should be made on the project’s role in meeting transportation mobility and environmental policies. The draft 2012 Business Plan does correctly set out its projections in “job years”, though greater precision in language is warranted in the Plan’s final version.