The Cure for Poverty in Two Words 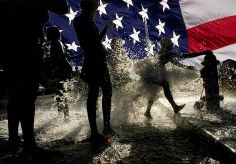 Two and a half years after the Occupy Movement jolted the country, America is once again abuzz with talk about poverty and inequality. Of course, along with a heightened focus on the problem come lots of ideas for fixing it. Some are smart, others are not, but nearly all of them share one thing in common: They are complicated.

The status quo “solution” isn’t complicated – at least on paper. It’s the one proposed by former Reagan official Herbert Meyer, who, on his website The Cure for Poverty, offers a three-word remedy: the free market.

Meyer, who worked at the CIA, may have been too busy warding off the enemy to notice that market forces have enjoyed one of the most unfettered periods in recent American history, even as poverty and inequality have risen inexorably. But he is surely onto something with his one-step prescription.

So I have my own, Meyer-inspired proposal to end poverty: Raise wages. Not only is it one word shorter than Meyer’s panacea, it would actually work.

I mean no disrespect to the serious thinkers who are devising ten-point plans with voluminous explanations and implementation steps. (LAANE, the organization I run, is no stranger to complex policy solutions.) But at the end of the day, raising wages is what we need to do.

Sure, better education would help. But the majority of new jobs in our economy are low-wage service sector jobs, and do not require a college degree. Indeed, the numbers of unemployed college graduates – and that includes those with master’s degrees or higher – continue to skyrocket. Today’s workers are far more educated than their predecessors, yet wages are stagnant and good jobs are scarce.

Nor is there anything wrong with increasing the Earned Income Tax Credit. But if anyone thinks the EITC is going to end poverty, check with the moderate Republicans who created it back in the 1970s. (They’re gone, but the EITC and poverty are still here.)

What about the good new tech and green jobs of the future? Bring ‘em on, but don’t think for a minute there will be enough to reverse the country’s slide toward Third World levels of inequality.

There’s nothing like a good meal when you’re hungry, and there’s nothing quite like better pay to lift people out of poverty. That’s why campaigns to raise the minimum wage are popping up all over the country – people understand that more money means less deprivation and a growing economy.

Here in L.A., LAANE is leading an effort to raise wages for hotel workers. We are calling for an increase to $15.37 an hour for workers at large hotels across the city. Why large hotels? Because they can easily afford to raise their pay. Because their workforce desperately needs it. And because higher salaries for hotel workers mean more consumer spending, thereby helping business, government and the economy.

Is it really that simple? Yes. That’s where Herbert Meyer and I agree.

This piece first appeared in capitalandmain.com