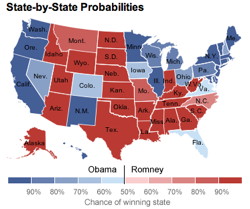 Liberals don’t want to jinx it. It terrifies the right. And the press would prefer a nail-biter. But the fact is that finding Romney’s path to victory is getting harder every day.

There’s a secret lurking behind everything you’re reading about the upcoming election, a secret that all political insiders know—or should—but few are talking about, most likely because it takes the drama out of the whole business. The secret is the electoral college, and the fact is that the more you look at it, the more you come to conclude that Mitt Romney has to draw an inside straight like you’ve never ever seen in a movie to win this thing. This is especially true now that it seems as if Pennsylvania isn’t really up for grabs. Romney’s paths to 270 are few.

First, let’s discuss Pennsylvania. There has been good reason for Democrats to sweat this state. True, Obama won it handily in 2008, by 10 points. But it’s a state that is older and whiter and more working-class than most of America. Obama benefited from all the unique circumstances of 2008 that helped him across the country, but if ever there were a state where the “well, we gave the black guy a chance and he blew it” meme might catch on, it’s the Keystone State.

But the jobless rate there is 7.5 percent, well below the national average. Democratic voter registration has held its own. The Philly suburbs have grown. And this odious voter ID law is facing meaningful challenges. A hearing on the law’s validity has just been concluded. A state judge says he’ll rule on the law’s constitutionality the week of Aug. 13. It sounds as if the law’s opponents made a stronger case at the hearing than its supporters. In any case, the losing side will appeal to the state Supreme Court.

But whatever happens with that law, Pennsylvania has been trending back toward Obama lately. He now holds a lead there of nearly seven points, and he’s close to 50. And as I wrote the other day, Nate Silver now gives Barack Obama a slightly better chance of winning Montana than he does Romney of winning Pennsylvania. That tells you something.

The Democrats’ Pennsylvania sweat also had to do with its size—20 electoral votes, tied with Illinois for fifth biggest in the country. Democrats have been able to count on those votes for 20 years. Losing them would be a dagger right in the heart, a maybe irreparable sundering of the party’s electoral coalition. Imagine Republicans losing usually reliable Missouri (10 EV’s) and Arizona (11). Big ouch.

So if Pennsylvania is off the boards, let’s look around. Imagine it’s election night, say 10:45 east coast time. Four eastern states haven’t been called yet: Ohio (18), Virginia (13), North Carolina (15), and Florida (29). Also, in some Western states, the polls haven’t closed, or the races are too tight to project just yet—Colorado and Nevada, say. Arizona has just been called for Romney. At this point, Romney actually leads, 188 to 182. In this scenario I’m assuming Obama has won Iowa (6), which is admittedly close but where his lead has been stable at three or four points, and New Hampshire (4), where Obama has a similar fairly small but stable lead, and Michigan (16), where the gap appears to be opening up a little.

So it’s a six-vote Romney edge. They’re feeling great up in Boston. Especially with the big Eastern four still up in the air. Right?

Not really. Let’s look at these West Coast states. Even though they’re still voting in California, obviously Obama is going to win it (55). And equally obviously, he’s going to win Washington (12) and Oregon (7), where neither side even bothered to spend a dime. Throw in Hawaii (4). Those 78 votes haul Obama up to 260. That’s something to keep in mind for election night: Whatever Obama’s number is at 10 pm Eastern, add those 78 EV’s—they’re a mortal lock, and a hefty insurance policy. If he wins Nevada (6) and Colorado (9), it’s over.

In other words, Obama can lose the big Eastern four—Ohio, Virginia, North Carolina, and Florida: all of ’em!—and still be reelected.

And barring some huge cataclysm, he’s not losing all four of those states. If he wins even one—say Virginia, the smallest of the four—then Romney has to win Colorado, Iowa, and New Hampshire; all possible, certainly, but all states where he has been behind, narrowly but consistently, for weeks or months.

The list of states where Obama holds that narrow but consistent lead is long: Ohio, Virginia, Iowa, Colorado, Nevada, and New Hampshire. Michigan and Wisconsin are no longer really narrow. Florida is more or less a dead heat. The bottom line is that of the dozen or so key swing states, Romney leads only in one: North Carolina. And that lead developed only over the summer. We’ll see whether the Democrats’ decision to convene in Charlotte has any impact on Romney’s three-point margin.

All this explains the interesting little chart toward the lower right-hand corner of Nate Silver’s home page (featured at the top of this article,) headed “Electoral Vote Distribution.” It rates the probability that Obama receives a certain number of electoral votes. Most outcomes, in a range running from 150 EV’s up to 400, rate around a 2 percent chance of Obama receiving that number. The highest spike on the chart? It’s at around 330 EV’s, which Silver reckons Obama has a 14 percent chance of hitting. Now, most political journalists would chuckle derisively at the idea that Obama is going to carry home 330 EV’s. Deride away. And while you do, bear in mind that Silver called 50 out of 51 states last time (counting D.C.; he missed only Indiana) and every single Senate race.

Sure, something big could happen to alter the dynamic completely. But we’ve watched these guys go, what, six or seven rounds now (out of 15). After seven rounds, you can pretty well tell some things. All the supposedly game-changing events of the last few weeks haven’t changed much of anything. This is a paradoxical situation that has little or no modern precedent, which makes it hard for people to accept. Liberals are too nervous to think it, reporters too intent on a “down to the wire” narrative, and conservatives too furious and disbelieving, but it’s shaping up to be true: An extremely close election that on election night itself stands a surprisingly good chance of being not that close at all.

This piece was first published at the Daily Beast.