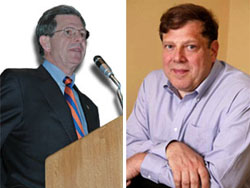 With the Hillary Clinton campaign in disarray, it’s obvious that her strategy of “kitchen-sink” attacks on Barack Obama is not helping the cause. But there may be another agenda to explain it. Mark Penn, Clinton’s top political guru who has pushed her to “go negative” while other advisers have not, is the C.E.O. of a consulting firm whose D.C. lobbying subsidiary is run by Charlie Black (the top political adviser to John McCain.) Penn may have concluded that his client’s prospects are toast, and he knows that a President McCain would better serve his company’s interests than a President Obama. He may be simply looking past the primaries, and that slinging mud at Obama now could hurt him in the general election. Democrats who support Clinton should be outraged, but it’s too simple to conclude that Mark Penn is just taking Hillary for a ride. The Clintons have been using Penn for 12 years, and know exactly what he’s about. Will Clinton end her campaign on a high note by firing Penn, or will she keep letting herself be a pawn in his game?

Last night’s debate – Hillary Clinton’s “make-or-break” moment after losing eleven consecutive primaries – featured more of the same attacks on Obama that we’ve heard all week. When asked about her “meet me in Ohio” remarks less than 48 hours after saying what a pleasure it had been to run against him, Clinton again went on the offensive about the health care issue – making Obama appear cool and above the fray.

Clinton’s attacks on Obama have appeared desperate, and do not make her likable. In recent days, she has sarcastically mocked his message of hope, and her campaign tried to link Obama to 60’s radicals. The latter is because in the mid-1990’s, Obama attended a fundraiser at the home of former SDS leader Bernardine Dohrn (who is now a respected law professor and childrens’ rights activist.)

It’s the new Clinton campaign strategy. One of her campaign aides even told the New York Times that they’re planning a “kitchen-sink” fusillade against Obama, hurling out every possible attack and hoping that something will stick. But at this point, it will only hurt her chances – as it makes her appear shrill and desperate.

But Mark Penn, her most influential campaign adviser and top pollster, is telling her to keep attacking – while others in her inner circle worry that it won’t help. They argue that she should keep a positive image — so as to not divide the party if she wins, or permanently damage her reputation if she loses.

Frankly, it’s hard to see what Hillary Clinton can do to win the nomination. We know that going negative has backfired, but going positive probably won’t help either. Obama out-inspires her on the campaign stump, and at this point it looks like voters have made up their minds. The numbers also don’t show her winning the nomination either.

Penn’s a smart guy, and he may have concluded that Clinton simply cannot beat Obama. But for Hillary supporters who want to see a unified Democratic campaign (how many times have I heard them say we should have a Clinton-Obama ticket?), they should be alarmed that Penn keeps telling her to sling mud. And that may be because he’s looking out for his own long-term interests – which favor John McCain.

Mark Penn is the C.E.O. of Burston-Marsteller, a consulting firm whose clients include Blackwater, Microsoft and General Motors. In a must-read article for The Nation from last summer, Ari Berman described in detail the more controversial aspects of Penn’s firm – including its union-busting work on behalf of corporations.

Black is working full-time for the presumptive GOP nominee, while also moonlighting in his regular lobbying job – even taking business calls on the “Straight Talk Express.” As the Washington Post reported, Black’s lobbying work offers corporate interests and foreign governments the promise of access to the nation’s most powerful lawmakers. With his ties to McCain, they could bring a lot more money to Burston-Marsteller.

Penn may have concluded that Clinton can’t win – but that doesn’t mean that Obama will be the next President. He will still have to face John McCain in the November election, and a national electorate who will be more conservative than Democratic primary voters. And with his business partner so close to McCain, there’s no question that a McCain Administration would be good for Mark Penn’s corporate clients.

Recently, Internet gossip columnist Matt Drudge released a photo of Obama dressed in traditional Somali garb while on a visit to East Africa. This won’t sink Obama’s chances at the nomination, but it could hurt him in the general election with red-state voters – many of whom already believe false rumors that Obama is Muslim. Drudge claims that the Clinton campaign fed him the photo, a charge which a spokesperson denied.

At last night’s debate, Clinton said that her campaign, as far as she knew, had nothing to do with the photo. Obama graciously said we should take Clinton at her word that “she knew nothing,” but that doesn’t mean somebody from the Clinton campaign didn’t do it behind her back. It’s pretty consistent with what other Clinton operatives got busted doing before, which begs the question: was Mark Penn involved?

It’s all speculation – but keep in mind that if he can’t elect Clinton, defeating Obama would help Mark Penn. Given the choice between a President who has not taken money from Washington lobbyists and one who counts corporate lobbyists as his closest advisers, Burston-Marsteller would clearly benefit from the latter. With his candidate likely to lose the nomination, Penn’s thinking ahead about what would help him.

Democrats who support Clinton will argue that it’s not her fault – that assuming it’s all true, their candidate is merely an innocent victim in this nefarious charade. But the Clintons have long known Mark Penn, and what he’s really about. They share part of the blame for keeping him on the payroll for so long.

Penn was brought in to work on Bill Clinton’s 1996 re-election campaign by Dick Morris – the notorious consultant whose clients included Jesse Helms and Trent Lott. Penn stayed on after Morris got fired – perfecting the strategy of running against progressives and co-opting Republican positions like v-chips and school uniforms. In his book, Locked in the Cabinet, Clinton Labor Secretary Robert Reich described a lecture he got at the White House from Mark Penn – referring to him as Dick Morris’ “shadow.”

Penn advised Bill Clinton throughout his second term, and then helped run Hillary’s run for the Senate in 2000. All the while, he’s developed a reputation as another Karl Rove – a vicious political consultant with no real scruples, who relishes to divide and conquer different slices of the electorate.

Today, Dick Morris makes his living on Fox News by attacking Hillary Clinton from the right. You would think by now that the Clintons would know better – and not let Mark Penn become the next Dick Morris. Because what will he do after Clinton loses the nomination to Barack Obama? Will he support the Democratic cause, or stick to his corporate clients who would rather have McCain? Fox News will love to have Penn on their station this fall, attacking Obama under the cloak of “political commentary.”

If she truly cares about electing a Democrat, Hillary Clinton should fire Mark Penn now before he does Obama any long-term damage. Because his advice isn’t going to make her the next President, but it might make John McCain.