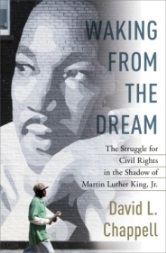 If you are looking for fresh analysis of the African-American Civil Rights Movement following Martin Luther King’s murder, and particularly of Jesse Jackson’s emerging role, this and more can be found in David Chappell’s insightful new book, Waking from the Dream: The Struggle for Civil Rights in the Shadow of Martin Luther King, Jr”

It is always a delight to confront a book that forces you to reexamine long accepted views of past events. In this case, David Chappell brings us back to the period of 1968-88, the two decades following King’s killing. Most see the African-American civil rights movement stalling during these years, and even set backward by a declining economy, court decisions rolling back affirmative action and other integration strategies, and the rightward shift of the nation’s political leadership.

But Chappell paints a different picture. And it is convincing.

Victim of its own Success

In 1964 and 1965, the civil rights movement won two of the most significant legislative victories in the history of the United States. These measures finally implemented the 14th and 15th amendments, and capped off a particularly intense grassroots civil rights movement over the prior decade in which Martin Luther King, Jr played a central role

As a result of King’s murder, a previously stymied federal anti-discrimination in housing bill passed in 1968. This was another legislative accomplishment of dramatic importance to people’s daily lives.

1969 begins with King gone, Richard Nixon (whose civil rights record prior to his taking office was equal to many Northern Democrats) in the White House, and the civil rights movement unclear where to go next. The movement split in two directions: black nationalism, in which racial unity took precedent over class issues, and the broader anti-poverty, pro-labor coalition that King’s Poor People’s Movement was advancing when he was killed (and which his widow similarly embraced).

Flush with three historic victories in a five year period, civil rights activists set a high bar that no movement should have been expected to meet. This led many both in and out of the movement to downplay legislative successes like the Humphrey-Hawkins Full Employment Act of 1978. Chappell explains why this Act was more important than many realized, and how its passage even in watered down form would have been seen as a major milestone but for it falling far short of the three historic civil rights measures of 1964, 1965, and 1968 that preceded it.

The passage of a full employment act a decade after King’s death undermines popular belief that the civil rights movement “died” or became ineffective after 1968. I think many will find Chappell’s discussion of the politics surrounding Humphrey-Hawkins as a real eye-opener, both for its demonstrating the continued potency of the civil rights-labor alliance, and also as it demonstrates just how far to the right the economic debate has since shifted.

Chappell’s both also requires a reassessment of the historic role of Jesse Jackson.

I have seen Jackson as a man of missed opportunities. A speaker of remarkable talents and a keen social critic, is addiction to the media spotlight alienated allies, particularly in his home city of Chicago. Jackson appeared less interested in organization or movement building than in being seen as King’s successor, the next charismatic leader for the civil rights movement.

Chappell’s discussion of Jackson only covers 1968-1988, but it forces us to rethink some of our assumptions.

First, Chappell details how the frequently-repeated story of Jackson so eager to pick up King’s mantle that he wore a shirt for days with King’s blood on it is entirely false. In the Internet era that defamatory allegation toward Jackson would have been resolved in 24 hours.

Second, Chappell reminds us that Jackson was the key figure of the 1980’s focused on expanding the voting base among African-Americans and the poor. Thanks to Jackson’s voter registration drive in 1984, African-American registration reached an all-time high of 66.3%, even exceeding that of the Barack Obama election of 2008.

Third, Jackson was also the leading force in the 1980’s for building a progressive, multi-racial (“Rainbow”) political coalition. Whereas many focus on the shortcomings of this effort—particularly his failure to follow through on his pledge to build a post-election organization to “keep hope alive—-who else on the national political landscape was giving voice to the voiceless and to unions, racial minorities and what Jackson called the “locked out”?

Chappell sees Jackson’s presidential campaigns as building upon King’s model for a “Poor People’s Movement.” And that he fell short should not tarnish the effort.

At less than 200 pages, Waking from the Dream is a rare exception to the now standard 300-700 page nonfiction books. I appreciated the brevity because the author made his key points clear, but others may question his reducing twenty years of the post-King era to such a short book. Chappell also wastes pages on an unnecessary review of charges that King plagiarized his doctoral thesis, an issue that has little to do with his central thesis that the movement achieved much more in the two decades after its leader’s murder than is commonly realized.

By reminding activists of hard fought victories largely forgotten due to the once in a century wins that preceded them, Chappell provides a vital service to those working for social change. Readers may not always agree with his conclusions, but they will enjoy the debate.

Randy Shaw is Editor of Beyond Chron. His new book is, The Activist’s Handbook, 2nd ed.: Winning Social Change in the 21st Century