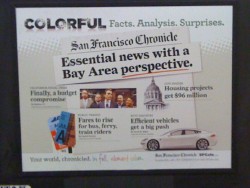 The San Francisco Chronicle has launched a new billboard ad campaign in Muni subway stations – with the slogan “Essential news with a Bay Area perspective.” Does columnist Debra Saunders offer readers a Bay Area perspective? How about Carla Marinucci bashing San Francisco as a freakish island out of touch with mainstream America? Wyatt Buchanan’s front-page analysis of the state budget that could have been written by the Howard Jarvis Taxpayer’s Association? The Chronicle’s love letter to Arnold Schwarzenegger – or its fetish with statewide Republican politics? How about the fact that they only have one Asian columnist, one black – and no Latinos? When the Chronicle says they have a “Bay Area perspective,” maybe they should add “from the 1950’s.”