The Chronicle’s Fetish with Republicans 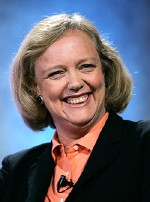 If you want to know why the SF Chronicle is going under, look at its current obsession with the GOP gubernatorial primary – and the unwarranted front-page coverage it receives. In a deep blue state like California, no Republican (save for a Hollywood action hero) can be elected Governor – making its June 2010 primary the Golden State equivalent of winning a gag prize. But in the past five weeks, the Chronicle has had five front-page articles about statewide Republican politics – with three pieces on gubernatorial hopeful Meg Whitman. The paper’s right-wing columnist Debra Saunders also wrote a profile on Whitman in January, called “The Woman Who Would Be Governator.” Does anyone seriously believe that a former John McCain campaign aide can get elected Governor – in a state that Obama carried by three million votes? Republican leaders aren’t popular these days, and a recent poll shows that even Republicans are turning against their leaders in Washington. The Chronicle seems to acknowledge this, as yesterday’s front-page explored the right-wing sectarian battle going on within the state Republican Party – as if it still mattered.

In 1994, Pete Wilson used Prop 187 to get re-elected Governor – prompting millions of immigrants to apply for citizenship, vote Democratic and transform the state’s political future. By 2002, California had no Republican statewide elected officials. Only because of Gray Davis’ disastrous job – coupled with a B-movie actor announcing on Jay Leno that he would take him on – did the GOP win a brief foothold in running the state. In June 2010, no one who can win major statewide office will get the Republican nod.

But the Chronicle didn’t get the memo. Rather than focus on Democrats (and ask why a dynamic state like California can’t produce an inspiring liberal candidate like Obama), San Francisco’s paper of record would rather promote virtually unknown Republicans who will not be the next Governor. Carla Marinucci – who seems to quote GOP consultant Bill Whalen as a source in all her articles – wrote two front-page profiles in February about former eBay CEO Meg Whitman, and one last week about Senate candidate Carly Fiorina. She also wrote a long comparative piece about two gubernatorial candidates – Gavin Newsom (a Democrat) and Whitman (a Republican), as if they should both be viewed at this point with equal seriousness.

It’s almost like the Chronicle, concerned that Republicans are losing appeal, is on a search to find a GOP candidate “moderate” enough to win the Governor’s race – or defeat Senator Barbara Boxer. Even if a candidate existed, there’s no way Republicans would nominate them. California’s GOP is dominated by anti-tax extremists only relevant in state politics today because of the two-thirds rule in the state legislature. They get elected from districts in Fresno and Orange County, and rise up in the Sacramento leadership. But winning statewide? Forget it. The only reason Arnold won is (a) it was a recall with no GOP primary, and (b) he’s a movie star.

Of course, Marinucci knows the state Republican Party is dominated by Neanderthals more interested in shrinking the size of government so they can drown it in a bathtub. She wrote about it yesterday on the Chronicle’s front page, chronicling the state party’s sectarian war between the “right” and “extreme right.” But while the state struggles with a budget mess that the next Governor will have to deal with, a major newspaper should be scrutinizing candidates who actually stand a chance of winning.

Meanwhile, Republican leaders in Washington are gradually losing respect in the eyes of the American people every day. A new Pew Research poll finds that, while the public’s opinion of Congress has gone up, the Republican minority’s approval is at 28% – the lowest it has been since polling began. More striking, however, is that GOP leaders are losing respect among voters in their own party. In the past month alone, Republican approval of their party leadership has sunk by 12 points.

“Why is this happening,” asked blogger Greg Sargent. “Is it general lack of morale among Republicans? Is it that GOP voters are frustrated that their leaders haven’t succeeded in blocking Obama’s agenda? Or could it be that the Dem strategy of using Rush Limbaugh to drive a wedge between die-hard partisan Republicans and those who want to see Obama succeed is working? Something is turning Republicans against their own leadership — in big numbers.”

Maybe this means the Chronicle should start focusing more on Democrats.

EDITOR’S NOTE: Paul Hogarth will be a delegate to the California Democratic Party Convention in late April, representing the 13th Assembly District.