The Chronicle, Rescue Muni, and the Perils of One-Source Journalism 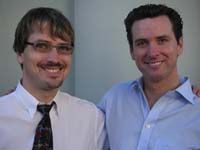 Reading the past few articles published by the Chronicle concerning Muni, it would appear transit riders in San Francisco have a single leader who they trust completely to speak for them – Andrew Sullivan of Rescue Muni. When writing about everything from union strikes to service cuts, Chronicle reporters rely almost entirely on Sullivan to provide riders’ views. Yet Sullivan does not speak for most Muni riders, and he does not claim to do so. The Chronicle’s reliance on a single source to frame the views of all riders skews the Muni debate towards a more conservative perspective, and reveals the practice of lazy, unprofessional reporting at our city’s most read daily.

When I studied in the Journalism Department at San Francisco State, several of my professors would not accept an article from me if I could not prove that for every source I quoted, I had spoken to at least five more. One of the first things freshman journalism students learn involves the importance of diversity of sources. Prospective reporters must make sure to get comments from a variety of people for every class assignment, no matter how narrow its focus may appear.

Most professional journalists consider the importance of this practice obvious. It allows the reporter to get a full picture of whatever issue being covered, presenting a story from all angles rather than just one. My professors rammed this point home continuously, calling anything less than multiple-source reporting “lazy journalism.” Apparently, Chronicle editors missed class that day.

A quick review of the past three articles written about Muni-related issues reveals Sullivan as the sole representative of riders’ perspective, with the exception of a quote from a single rider concerning fare evasion. Perhaps the most egregious example of this practice came in a piece about upcoming Muni service cuts, in which Sullivan represented the only person quoted in the entire article.

It’s impossible to believe transit riders don’t have a few things to say about proposed service cuts to their public transportation. But apparently walking out their front door and actually talking to a few of them seems too much effort to Chronicle reporters, especially when they can pick up the phone and just call Sullivan.

Everyday riders aren’t the only other sources Chronicle reporters could contact. Prominent activists like Richard Marquez and Jeremy Nelson are easily reachable, and have been involved with the Coalition for Transit Justice, a group of more than 30 community organizations concerned with social, environmental and economic justice in transit policy.

Instead, the Chronicle turns to Sullivan to align riders views with those of the Chronicle editorial board. Sullivan ran for Supervisor in District 5, where he received Mayor Gavin Newsom’s endorsement. So, unsurprisingly, Sullivan spends most of his time lauding the mayoral-appointed Muncipal Transportation Authority (MTA) and agreeing with whatever decisions they make, creating the illusion of the transit-riding community signing off on the MTA’s current proposed budget that includes fare hikes and service cuts.

Sullivan on service cuts: “We never like to see service reductions, but we also understand that the budget is what it is.”

On the MTA’s budget: “I think it is very unlikely that Muni can close this budget gap without service cuts and a fare increase.”

On a recent Muni employee strike: “A wildcat strike on the cable cars is a terrible way to get public sympathy.”

It’s possible transit riders in San Francisco understand that the MTA’s budget “is what it is,” but that it should go much, much further towards stopping fare hikes and service cuts. Others might consider it very likely that Muni could close their budget without cuts and hikes – in fact, the MTA itself presented a budget that did, they just chose not to implement it. And finally, many transit riders in our city might support a union strike if the MTA treated drivers unfairly.

You’d never know it, though, by reading Chronicle.

Sullivan’s supposed status as San Francisco’s resident Muni expert and spokesman for transit riders throughout the city is based on his position as the head of Rescue Muni. But this organization largely exists in name alone, its primary activity being the upkeep of a website and Sullivan attending and testifying at every MTA meeting.

But Sullivan should not be blamed for the Chronicle’s lazy reporting. Rescue Muni has never claimed to represent low-income transit riders or communities of color. It is the Chronicle that has given them the appearance that they do by not actively seeking any other sources to comment on Muni-related issues.

They have done this by being lazy. And unfortunately, should public officials and San Franciscans believe the vision of public attitude towards hikes and cuts that the Chronicle presents, transit riders throughout San Francisco may suffer because of it.