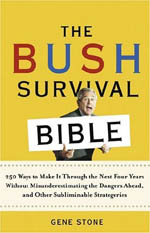 In the days prior to the election, I was in Las Vegas, Nevada, making maps on my iBook for the Kerry campaign, and canvassing with the folks from ACT, (America Coming Together). Ten of us had made the journey from the Bay Area, and the efforts of all involved were truly inspiring. We were all, optimistic about the outcome. The night before the election, our spirits were high. Kerry seemed poised to win, and my luck at “Texas Hold ’em” was profitable as well. With an early flight Wednesday morning, I went to bed on election night with the outcome still in doubt. As I sat in McCarran Airport the following morning, awaiting my flight back to San Francisco, the sobs of my fellow passengers revealed the truth of that fateful morning. Bush had won.

When I returned to SF, my good friend Robert Anbian tried to cheer me up. “I had hoped for a better outcome my man, but if it’ll make you feel any better, my pal Gene Stone just asked me to contribute to his newest book, “The Bush Survival Bible, 250 Ways to Make It Through the Next Four Years Without Misunderestimating the Dangers Ahead, and Other Subliminable Stratergies”.

Well, the timing was a little weird, but I love Robert and his work as a writer. Besides, I needed a lift. A few weeks went by, Robert finally got his copies and gave me one. Indeed, his friend Gene Stone is a writer of some note, having written for Esquire and New York magazine, to name just a few. The book’s liner notes tell you that, ” No matter who you are, no matter what you feel, there’s a solution for you. Yes, Bush won. But that doesn’t mean you have to lose. And remember, he can’t run for a third term. Just 1,461 days to go! Light a candle, don’t sweat the Bush stuff, and pray.” Anecdotes and advice are aplenty in this little tome. Chapters like, “Groups to Join”, (like ACT, MoveOn.com, and Democracy For America), “9 People Worse than Bush”, “American Politicians More Frightening Than Bush”, (Alan Keyes, Haley Barbour, and Tom Parker. Talk about scary!), and “8 Games to Play with Bush’s Body”, (I love the Bush Brain game), piqued my interest.

His list of “10 Progressive Movers and Shakers” profiles the likes of Eric Alterman and David Corn of the Nation, philanthropist George Soros, think tank fellow Ruy Teixeira, internet blog king, Joshua Micah Marshall, and Cheryl Jacques of the Human Rights Campaign. There are also lists of “Anti-Bush movies”, like the obvious Michael Moore film, and gems like Robert Greenwald’s “Un” Trilogy, and “Bush’s Brain”, based on the book of the same name, focusing on the svengali-like machinations of Karl Rove.

Alongside Stone, and Robert Anbian’s inspirational, “7 Points From the Left of Liberal”, are Pulitzer prize winning author Tracy Kidder’s, “8 Topics to Inspire Writers”, and Radio 360 creator Kurt Andersen’s, “7 Media Habits of Highly Effective People Who Aren’t Republicans”. I had to admit, despite the timing of this book, I’ve enjoyed practically each and every one of the chapters. It’s actually a really fun compendium on how to cope with the Bush administration for the next four years.

The Bush Survival Bible is a humorous accumulation of thoughts and knowledge, and some sobering advice and ideas that I would never have dreamt of. Some of my favorite chapters are, ‘1 Way To Tell When Bush Is Lying”, and “7 Modern Virtues to Live By”, by law professor Anita L. Allen. Allen opined that we re-dedicate ourselves “to know in your heart are the requirements of personal integrity, humane care, and global justice”, and that “times like these are a test of character”. Well, I’m not going to kid myself, the next four years are going to be very , very frightening indeed. However it’s nice to know that for 48% of us, (and I’m not counting Ohio yet), The Bush Survival Bible is a cool drink of water in a desert of defeat.

Thanks to the “Survival Bible”, I can finally look back fondly on my experiences in Las Vegas now. Out canvassing with folks from Sebastapol, Berkeley and as far away as San Diego and Alberta. The time a boy answered the door and said, “There’s a black man here for Kerry Mommy!”. When a poker dealer told a Bush supporter to ,”Vote or Die”, after I won a pot from him.. Yes, thanks for the book Robert.

.And thank you Mr. Stone.

The Bush Survival Bible, 250 Ways to Make It Through the Next Four Years Without Misunderestimating the Dangers Ahead, and Other Subliminable Stratergies
By Gene Stone
$9.95 Villard Books