The Battle to Save SRO Hotels for the Unhoused 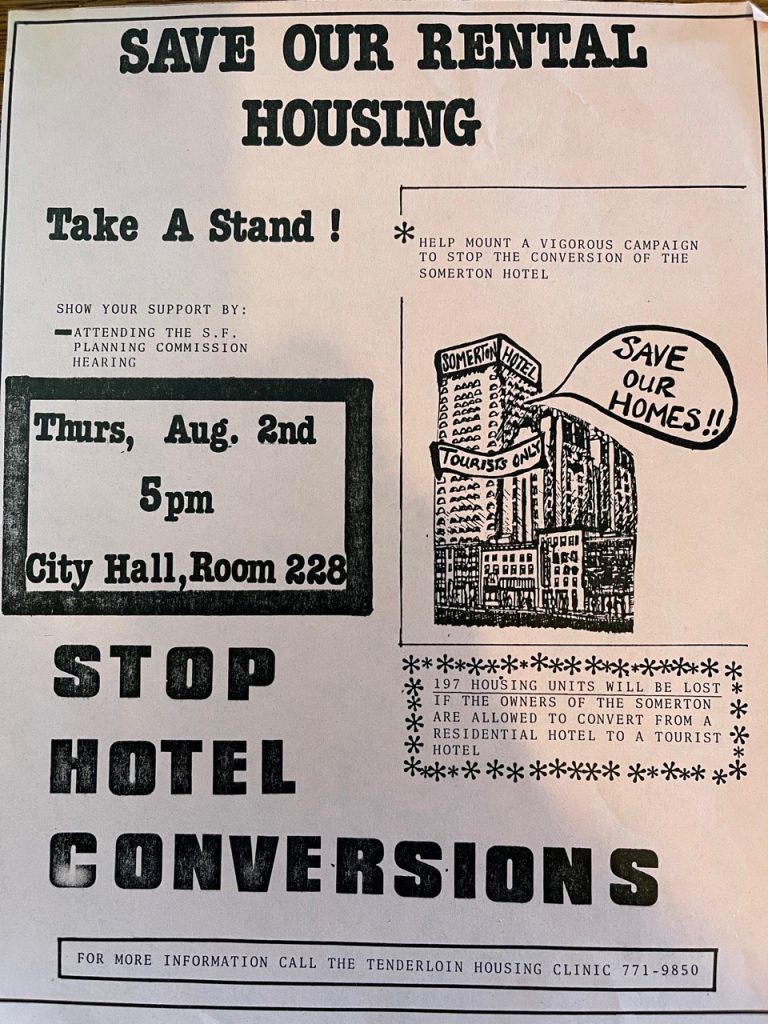 Our 1984 campaign against the soon to be renamed Hotel Diva

Conor Dougherty’s must-read story on cities buying SRO hotels (“One Way to Get Homeless Off the Streets, Buy Hotels,” NY Times April 17) evoked powerful memories for me. I did everything in my power in 1984-5 to reverse San Francisco’s decision allowing the residential Somerton Hotel to convert to tourist lodgings (renamed the Hotel Diva). When I heard that San Francisco was buying the Diva through California’s Project Homekey I felt that an historic injustice had been reversed.

The struggle that continued through the 1980’s to save the Somerton and other residential SRO hotels reflects a major tenant victory in the battle over gentrification. As I was quoted in the NY Times, “In the late ’70s, as San Francisco was gentrifying, the one supply of housing for low-income people was single-room-occupancy hotels. We thought the city should do everything they could to preserve it, because if you can’t live in an S.R.O., where are you going to go?”

Today, Governor Newsom, big city mayors, and most urban politicians a see SRO hotels as essential for housing the unhoused. But when the Tenderloin Housing Clinic opened in 1980 and I first got involved in the issue, SRO hotels were seen as blocking the city’s economic progress. Thousands of SRO rooms were demolished in the 1960’s and 70’s via South of Market Redevelopment with the full support of City Hall. The 1977 International Hotel evictions brought mass protests but even this dramatic displacement of seniors did not lead the city to protect SROs from conversion or demolition.

Momentum for those laws instead came from the Tenderloin. Tenants at the Dalt (34 Turk), Argyle (146 McAllister) and Glenburn (now Abigail, 246 McAllister) all faced displacement as owners tried to convert them into tourist lodgings. As I discuss in The Tenderloin: Sex, Crime and Resistance in the Heart of San Francisco, these battles to preserve SROs and the neighborhood’s residential character came to define the Tenderloin community. Tenant and community resistance in each case was fierce.

THC was part of a coalition with Chinatown Community Development Center, the San Francisco Gray Panthers, North of Market Planning Coalition and other activists in securing passage of the nation’s first law protecting SRO hotels from conversion or demolition. Dianne Feinstein was mayor, and she owned the Hotel Carleton which itself was converting from residential to tourist. Many thought that she did not veto the hotel law because it would highlight her economic self-interest.

While Feinstein signed the law in 1981 she also inserted loopholes that cost the city hundreds of residential rooms. She also handed enforcement to a then Bureau of Building Inspection (BBI) whose leader opposed spending resources on enforcement (a stance that continued until I wrote a charter amendment approved by voters in November 1994 that replaced BBI with a commission-run Department).

BBI’s granting the conversion of the Somerton was a classic example of the city just giving away desperately needed SRO housing. And it has bothered me for nearly forty years.

Here’s how the residential Somerton became the all-tourist Hotel Diva.

If prior to the passage of the Hotel Conversion Ordinance an owner was in the midst of a major renovation for tourist conversion,  it only made sense for the city to allow the conversion to proceed. But the Somerton owner failed to meet the core requirements of the exemption:

(c) (2)   The owner or operator has commenced work on extensive Capital Improvements and Rehabilitation Work prior to November 23, 1979, as defined in Section 37.2 of the San Francisco Administrative Code (the San Francisco Rent Stabilization and Arbitration Ordinance) and has completed such work on at least 35 percent of the units intended to be converted or has expended 40 percent of the total sum budgeted for said work;

(A)   Whether an architect has been engaged to prepare plans and specifications; or

(B)   Whether applications for construction work have been received; or

(C)   Whether applications for the necessary permits have been submitted to all relevant city departments; or

(D)   Whether a building permit has been issued.

The Somerton failed this test. Yet the city approved the conversion because the owner had installed television sets in each room. I learned from Conor Dougherty that cable television had been installed as well. I was in the hotel regularly in 1984 and no renovations nor capital improvements had begun.

Installing television sets is not “extensive Capital Improvements and Rehabilitation Work.” The city never should have granted the Somerton/Diva’s conversion because the requirements were not met.

I sued the prior owner for fraud on behalf of the tenants in order to overturn the city’s conversion decision. But I learned during the former owner’s deposition that he had told the truth to the city about how little work he had done—yet the City and County of San Francisco granted the conversion anyway!

While I succeeded in stopping the eviction of the over thirty Somerton tenants and effectively secured them lifetime leases, I have long remained bothered by the loss of the hotel’s residential status. That’s why nobody was more thrilled than me to see the city return the Diva to its legally correct residential use.

After decades when the Hotel Diva appeared lost to low-income tenants for good, Project Homekey corrected this historic injustice.