The Amazing Grace of William Wilberforce 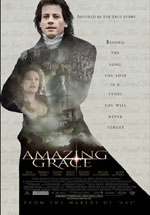 Many years ago, when my older cousin Bruce headed off to college on a basketball scholarship, I asked him where he was going to. “UCLA?, UNC?, Georgetown?”. “No, I’m going to Wilberforce, in Ohio,” he told me. “Wilberforce?”, I naively asked him. “Who was he?” Bruce smiled and said, “He’s the cat who ended slavery in England, look him up.” Indeed, Wilberforce is considered one of the Historically Black Colleges, and rightly so. The new film, “Amazing Grace”, recounts the life of William Wilberforce, abolitionist, statesman, and his lifelong friendship with then British Prime Minister William Pitt. This is a truly inspiring film and will leave anyone who watches it, moved by an incredibly important and compelling true story.

Amazing Grace the film, was directed by Michael Apted and chronicles the campaign against the slave trade in 19th century Britain, led by it’s most famous abolitionist William Wilberforce. Wilberforce was responsible for steering anti-slave trade legislation through the British parliament.

The title of the film of course, refers to the hymn “Amazing Grace” and the film also recounts John Newton’s writing of it. Ioan Gruffudd stars as William Wilberforce, Albert Finney as John Newton, Rufus Sewell as Thomas Clarkson, (Wilberforce’s cousin), my favorite Senegalese singer Youssou N’Dour, in his first film role as Olaudah Equiano, Benedict Cumberbatch as Prime Minister William Pitt “the Younger”, Romola Garai as Barbara Spooner, the woman Wilberforce married, and Ciarán Hinds as Sir Banastre Tarleton, one of Wilberforce’s chief opponents in the House of Commons. Richard Bailey and the great Michael Gambon as Fox also star.

The film’s opening on February 23, also coincided with the 200th anniversary of the date the British parliament voted to ban the slave trade. Amazing Grace begins with Wilberforce taking a holiday with his cousin, in which much of his past life is recalled. While on holiday he meets his soon-to-be wife, Barbara Spooner, who convinces him to tell her about his life, and through his eyes, we see the rest of his story. The film continues with their wedding, when the song Amazing Grace is sung. Afterwards, he heads back into politics to try once more to do something about the slave trade. In time, and after bitter defeats, he is eventually responsible for a bill being passed through parliament which abolishes the slave trade in the British empire for ever.

Wilberforce’s relationship to William Pitt was another untold and moving tale in itself. I don’t know where Pitt ranks amongst the Winston Churchills, Benjamin Disraelis, and other Prime Ministers of England, but he’s high on my list. Pitt had his hands full with the “madness” of King George, revolutions in the U.S. and France on his door step, and all the while plotting to end the slave trade with Wilberforce. It is not surprising they are buried side by side in Westminster Abbey.

Thanks to Wilberforce, the movement’s most visible champion of the time, Britain ended slavery, well before America, but in it’s wake, the abolitionist cause in the U.S. began to flourish. There are other great films that tell a fascinating story of the struggle; Steven Spielberg’s 1997 “Amistad,” about the fate of blacks on a mutinous slave ship during the Van Buren era, and Marlon Brando’s “Burn”, aka “Quiamada” which chronicles a fictional Caribbean colony in the grips of a slave rebellion, come readily to mind. The actor Danny Glover is also currently working on a film about the Haitian revolutionary, Toussaint L’Overture, leader of the only successful slave revolt in the New World.

Amazing Grace is a fantastic film about people, greed, and human decency, about revolutionary ideas and the will to fight injustices against all odds. Slavery in one form or another still exists on Earth in 2007, and any film, person or group that sheds light on this, the darkest, most murderous secret of all, deserves our thanks, and our support. I think cousin Bruce would agree.

E. “Doc” Smith is a musician and recording engineer who has worked on the films “Psycho 3”, “Who’s That Girl?”, and “Miami Vice”, among others. He is also the inventor of the musical instrument, the Drummstick. He can be reached at http://myspace.com/edoctorsmith