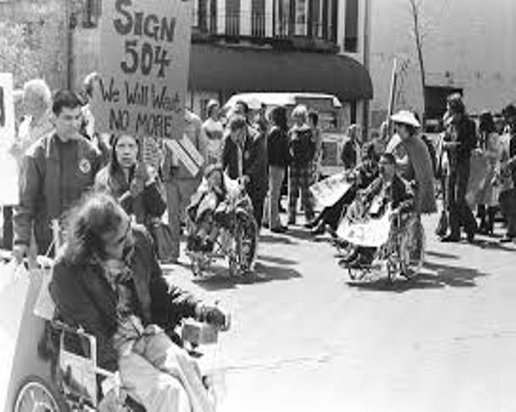 This month marks the 25th Anniversary of the Americans with Disabilities Act (ADA), a remarkable triumph of activism and political savvy. The ADA’s passage in 1990 followed more than a decade of intense grassroots organizing by a constituency marginalized and often relegated to institutions in prior generations.

Like the seemingly “overnight” victory for marriage equality, the ADA’s passage was the culmination of a long campaign. It now seems absurd that modern American buildings could be constructed that were physically inaccessible to people who use wheelchairs, but that was the norm. As with the right to marry, disability rights activists sought the most basic of rights that those without disabilities took for granted.

This would prove harder than it sounds. Universities, hospitals and other powerful institutions impacted by Section 504 went all out to prevent the proposed regulations from being implemented. This led disability right activists to mount a national campaign demanding that the Carter Administration “Sign 504 Now.”

I detail this remarkable national struggle in The Activist’s Handbook. It featured a 25-day sit-in by over 150 disability rights activists in San Francisco’s federal building in UN Plaza (500 when the sit-in began).

Among its leaders was the late Kitty Cone, who described the victory as showing that the disability rights movement “could wage a struggle at the highest level of government and win.” Activists built broad coalitions, expertly used the media, went to Washington DC when the San Francisco sit-in was lagging, and otherwise employed all of the tactics and strategies that occur in successful activist campaigns.

The 504 campaign’s historic role as paving the way for passage of the ADA is highlighted in an exhibition at the Ed Roberts campus in Berkeley compiled by the Paul Longmore Institute on Disability Programs at San Francisco State University. The exhibition, Patient No More, begins July 26 and goes to December 18. The Ed Roberts campus is above the Ashby BART station.

How the ADA Passed

The 504 campaign showed that disability rights activists had a ground game and could also play the “inside” legislative card. This latter strength was particularly evident in the ADA’s passage in 1990 during the administration of President George H. W. Bush.

This was four years before Newt Gingrich led a more right-wing Republican Party to House control in the 1994 elections. Bob Dole was the Republican Senate leader, and his own disability (from WW II) made him a strong advocate for disability rights and the ADA.

Many powerful Republicans supported disability rights in those days, including Justin Dart, Jr.. Dart had contracted polio while in college and his father was a longtime confidant of Ronald Reagan who encouraged the former California Governor to run for President.

With Dole and Dart on board, there was Republican support for a sweeping civil rights measure for people with disabilities that would be inconceivable in the GOP Congress today. Senators Tom Harkin and Ted Kennedy were the key Democratic leaders, and both knew how to win bipartisan support for legislation.

Two features of the ADA bolstered Republican support. First, there are no damages for violations by private sector public accommodations unrelated to employment . Second, the cost of implementing the measure would be borne by private, municipal and state entities, not the federal government. The lack of federal budget impact made the ADA a classic “unfunded federal mandate” that Republicans typically oppose but backed in this legislation.

While advocates celebrate this year’s anniversary, there is also frustration. It has been 25 years since the ADA passed and there should no longer be any excuses for noncompliance. Pressure from conservative business forces threatens to weaken the law and related state statutes. Full inclusion of all people with disabilities is elusive and culture is slow to change.

As I look toward where the disability rights movement can go in the next 25 years, Kitty Cone’s statement that the 1977 504 campaign represented of “one of the broadest coalitions I have ever seen” offers guidance for future struggles.