The 20th Animation Show Of Shows 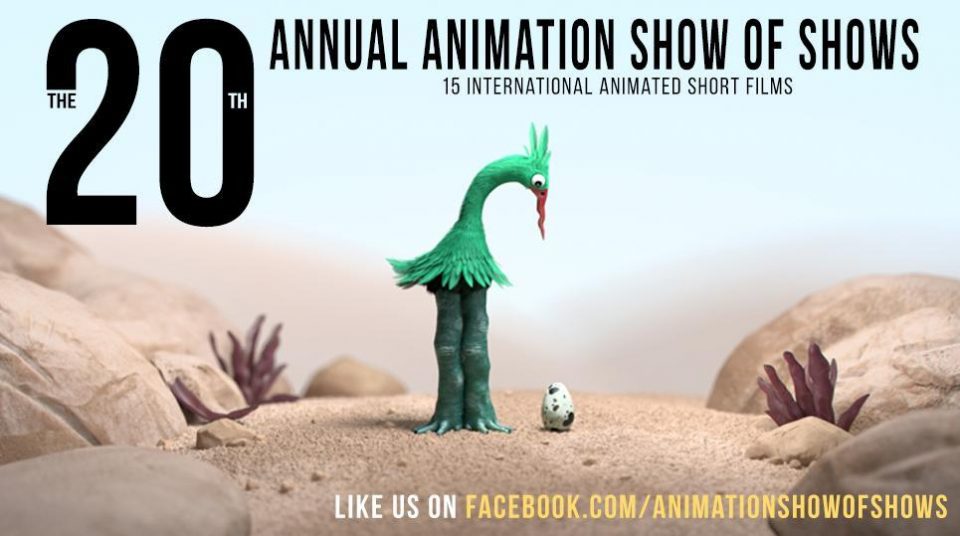 This year’s milestone edition of Ron Diamond’s Animation Show Of Shows brings viewers Chinese-American astronaut dreams, growing up with facial blindness, and an astronomical love triangle, among other delights.  This program came about from Diamond’s annual country-hopping to such festivals as Annecy to select the best animated shorts made over the past year. This year’s celebration, the 20th, features 15 films made in a variety of media ranging from simple cel animation to even VR.

For much of the Animation Show Of Shows’ history, the screening audience has been limited to professional animators working for such animation studios as Pixar, Dream Works, and Walt Disney Animation.  In the past few years, Diamond has crowdfunded to enable public theatrical screenings of his annual animated shorts collection. The 20th edition of this program opens November 2, 2018 at the Vogue Theater in San Francisco, the New Parkway Theater in Oakland, and the Lark Theater in Larkspur.  In addition, there will be a one-day only screening on November 4, 2018 at the Roxie Theater.

Diamond has chosen as a program theme the complexities (both good and bad) of Human Relationships.  This tone of the shorts vary from farcical comedy to heartfelt drama. Here’s how Diamond’s selections came out.

For more sensitive viewers, a lot of facial tissues will prove a necessary accompaniment for watching Andrew Chesworth and Bobby Pontillas’ incredibly heartfelt short “One Small Step.”   It’s one of those masterful and rare films which will both emotionally wreck the viewer’s heart and make them grateful for the experience.

Since age six, San Francisco resident Luna Chu has dreamed of becoming a space astronaut.  Over the many years that follow, Luna’s widower father Mr. Chu uses his simple shoe repair skills and his love to support his daughter’s dream.  Press notes indicate “One Small Step” qualifies to be entered for a Best Animated Short Oscar. Justice demands Chesworth and Pontillas’ film be made part of the final Oscar shortlist.  And if there’s a far better animated short than “One Small Step” out there this year, the case has not yet been made for it.

“Grands Canons” from Alain Biet earns the unofficial “Really Slaving For Your Art” award for creating an object animation short without using objects to animate the short.  The film itself can be called a dance to celebrate all the everyday objects people use in their lives. What takes Biet’s film into mind-blowing territory is seeing the painstaking work he puts into drawing every single object seen in the short.  It would have been easier to skimp on the details of one of Biet’s hand-drawn objects. The average human eye wouldn’t register and appreciate just how much work Biet put into these drawings. Biet’s refusal to take such shortcuts adds to “Grands Canons”’ aesthetic cachet.

Anchi Shen’s “Barry” turns out to be the program’s comparative clinker.  The “gifted student who has the grades to be a doctor” story isn’t anything new.  Making the titular gifted student a talking goat might have worked better if Shen tried modeling the story on the humorous absurdity of the late Steve Gerber’s “Howard the Duck.”  But no, this is just the usual forgettable “work hard and hope TPTB recognize your gifts” story one can see way too easily elsewhere.

In the caustic claymation short “Love Me, Fear Me,” Veronica Solomon turns attempts at human connection into stage performances.  As the central figure of the dancer tries various means to remain the center of popular attention, developing attention-getting artifice soon matters more than the identity of the person beneath the behavioral masks.  Solomon’s short may well make some viewers grateful they stay out of the spotlight.

If you’ve ever suspected board meetings offer nothing but verbal gassing and mindless conformity, director Guy Charnaux shows he knows your pain.  His “Business Meeting” follows a roomful of company executives as they become members of a circular agreement squad. Each member supports the nonsensical agreement made by the previous board member.   What the meeting facilitator calls productive work will seem to the viewer to be business-suited buck passing.

John Leeuwerink’s “Flower Found!” takes an overly familiar children’s story to adult extremes.  When a mouse discovers a flower missing from its garden, it turns to various animal friends to help find the missing flower’s whereabouts.  This charmingly innocuous search soon takes on a darker tone while staying age-appropriate. Then again, compared to the fates befalling mischievous children in a typical Der Struwwelpeter story, the finale of Leeuwerink’s short may seem comparatively tame.

Feeling like an animated version of one of Peter Mueller’s New Yorker cartoons, Nicolas Petelski’s “A Table Game” describes an unusual game played by two men sitting across from each other at a long table.  Each man tries to bounce a tennis ball in hopes that it lands in the other man’s open mouth. The point behind this game eventually gets revealed, but that revelation proves less than impressive.

Valentin Riedl and Frederic Schuld’s contribution to the program is the powerful animated documentary “Carlotta’s Face.”  Its title subject talks about life as child with prosopagnosia. Better known as facial blindness, such a condition wound up isolating young Carlotta from her peers and earning her the enmity of teachers.  Riedl and Schuld don’t sugarcoat Carlotta’s emotional hardships growing up. But the short satisfyingly finds hope for Carlotta in an unexpected manner.

Seeing John Kahrs’ “Age Of Sail” in 2-D will spare more sensitive viewers the nausea resulting from seeing the film’s North Atlantic waves rising and falling in VR.  Until the film gets to that point, though, this enjoyable adventure swiftly sets up its story. In 1900, old sailboat captain William Avery (Ian Mc Shane, aka Mr. Wednesday from “American Gods”) is emotionally and physically becalmed in the North Atlantic.  While steam ships unconcernedly zip by Avery’s sailboat, the old captain gets drunk on booze and resentment at being left behind. When Avery rescues a teenager fallen overboard from a passenger ship, that rescue sets off a series of events that may well lead to the captain’s salvation.  Kahrs’ VR animation particularly astounds in capturing the amorphousness of the ocean in motion.

“Polaris” movingly deals with the universal moment when a child leaves their parental home to seek their fortune in the world.  Hikari Toriumi’s use of polar bears in the parent and child roles doesn’t make the film any less touching. If anything, the short underscores the truth that outdistancing the parent who guided you earlier in life doesn’t mean forgetting the parent-child moments that got you to this point.

The love triangle tale gets taken to a new level of complication in Eusong Lee’s delightful fantasy “My Moon.”   For one thing, the members of this triangle are literal personifications of the Moon, the Earth, and the Sun. Their love for each other takes different forms.  The viewer’s well aware that “resolving” this triangle would bring disaster to the people living on the Earth. Yet The Moon’s obvious unhappiness at this triangle’s existence ensures perfect balance will never be fully achieved, just resigned acceptance.

Trevor Jimenez closes out this year’s Animation Show Of Shows with the touching divorce drama “Weekends.”  Through a little boy’s weekend trips back and forth between his divorced parents, the viewer slowly learns how each adult faces their new personal status quo as well as the child’s attempts to grasp what’s left unsaid to him.  Does the birth mother’s neck brace mean physical abuse by the birth father led to the divorce? Does the birth father’s love for Dire Straits’ “Money For Nothing” mean his sense of entitlement fueled the separation? By not providing direct answers, Jimenez has created an involving close to the first part of this year’s celebrations by the Animation Show Of Shows.

The second part of the celebrations for the 20th year of the Animation Show Of Shows will be a Best of the Best program.   This future program of the best shorts previously shown at the Animation Show of Shows will hopefully include “One Small Step” among the honored ranks of (possibly) “When The Day Breaks,” “Pearl,” and “We Can’t Live Without The Cosmos.”