The 2009 World Series of Poker 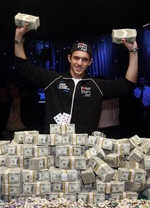 I first wrote about the poker phenomenon back in 2004. Since then, the WSOP has become a mega-event for the poker world, especially since a string of amateurs have taken the title the last several years: Robert Varkoni, Chris Moneymaker, Greg Raymer, Jamie Gold, Jerry Yang and Eastgate, with Australian pro Joe Hashem being the exception. Coupled with the success of poker on TV, particularly shows like the “World Poker Tour”, anyone and everyone; celebrities, amateurs, housewives, sports stars and musicians have gone poker crazy.

In fact, the WSOP has become so popular that beginning last year, the tournament suspends play once the last nine players reach the final table. No doubt to take advantage of marketing and hyping the event. So following a break of several months, the “November Nine” return to Las Vegas to finish the tournament and decide the winner. The famed pros Phil Ivey and Jeff Shulman were dispatched along with the other five, leaving Cada and Moon to settle it all.

Many pundits were predicting a quick night and they nearly got exactly that on the first hand of the night. Moon limped from the small blind and Cada raised to 3,500,000 and Moon called. The flop came King, Three, Deuce and Cada bet 2,500,000. Moon raised to 10,000,000 and Cada called. The turn was an Ace, and Moon followed Cada’s check with a bet of 10,000,000 more and Cada called again. Both players checked the King on the river. Cada showed pocket Nines and Moon showed pocket Queens to take the 47,000,000 chip pot.

After the first break of the night Moon, became “a man on a mission”. He picked up four of the first five pots by countering Cada’s aggression with even more aggression. Cada’s raises were almost always met with a re-raise from Moon, forcing Cada to fold without even seeing a flop and the shift caused Cada some concern.

“It threw me off”, said Cada. “Every time he did something it was different. Every time I did something or made a move it was a misstep. He played perfect poker”, recalled Cada, who saw his chip lead turn into a 3-1 chip deficit at one point.

Cada’s tournament seemed to turn around on the 80th hand of heads up play. Cada put in a pref-lop button raise to 3,000,000 and Moon called. The flop came Ten, Nine, Five and both players checked. The turn came Ten and after Moon checked, Cada bet 3,000,000. Moon responded by announcing “All-in”. Cada took some time to replay the hand in his head and after tanking for some time made the call and showed Jack, Nine. Moon showed Seven, Eight and was behind, needing a Six or a Jack to complete his straight draw. The river was a Three and Cada doubled through to 109,000,000 and the chip lead.

“I was almost positive I was ahead”, said Cada. “The only problem was the bet compared to the pot size. It was a big bet, it was like 50 million and I bet 3 million into a 6 million pot… Once you break down the hand and think about it, it is not that tough of a call.”

Only eight hands later and the tournament was over. Cada raised to 3,000,000 from the button and Moon followed the pattern he had been following with a re-raise to 8,000,000. Cada announced “All-in”, and Moon called almost instantly. Cada showed a pair of Nines and Moon showed Queen, Jack and all of Cada’s cheering section went wild. The flop came Eight, Seven, Deuce and Cada stayed ahead. The turn card was a King and the river card was a Seven. Suddenly, Moon had missed his draw and Cada was world champion.

“It is a pretty sick flip that you have to wait”, said Cada. “I thought he had queens at first when he flipped it over. Once I saw queen-jack it was one of those things, if I win I win, if I lose I lose.”

For his part Moon realized he was behind but was prepared to race in hopes of taking back the chip lead.

Now Cada is the World Series of Poker main event ichampion, winning $8.55 million and becoming the youngest player to win the tournament in its 40-year history. Don’t feel too bad for the second place Moon. His take? $5.18 million. Thanks to the folks at Bluff magazine for contributing to this report.

E. “Doc” Smith is a former Rhode Island Amateur Chess Champion, and has won divisional titles in the U.S. Amateur Team Championships for Brown University as well as the Rhode Island Chess League Championships. He has won a few poker tournaments and plays strictly for fun.