The 2009 National Biodiesel Board Conference in San Francisco 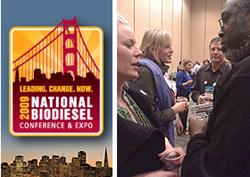 The world of biodiesel producers, advocates, retailers and scientists, descended on San Francisco this week for the annual 2009 National Biodiesel Board Conference and the Sustainable Biodiesel Summit at the Moscone Center. San Francisco is perhaps the largest city in the world to employ biodiesel in its diesel fleet, including MUNI and the SF Fire Department, as well as private companies like the Red and White fleet at Fisherman’s Wharf and the locomotives of the San Francisco Bay Railroad. With luminaries from around the globe and advocates like actress Darryl Hannah in attendance, the NBB’s executive director Joe Jobe opened the conference and spoke of the many challenges facing this alternative fuel, including an assault from junk scientists and lobbyists from the petroleum industry. To showcase San Francisco for the event, Jobe scouted the city several months ago, filming San Francisco’s wide array of successful biodiesel uses, from the SFPUC’s successful Greasecycle, to Berkeley’s Biofuel Oasis. What transpired was an unforgettable week of biodiesel education, networking and the resolve to join together in facing one of the planet’s biggest challenges, our dependance on oil.

“I can’t believe they are going sustainable”, proclaimed a jubilant Hannah, upon hearing the NBB’s adoption of the Sustainable Biodiesel Alliance’s sustainable principles. The grassroot offsprings of the NBB, the SBA and the California Biodiesel Alliance, once languished in “shadow conferences” preceding the traditional NBB meetings. No longer. Now these groups have a seat at the table and the NBB and it’s energetic director Jobe have recognized the work of these biodiesel pioneers on the front lines. “Make no mistake, we are out manned and out gunned by an extremely well funded petroleum industry who will do anything they can to stop us”, says Jobe. “We have science and the facts are on our side”. Indeed, the petroleum industry as well as the grocery manufacturers have hired an army of lobbyists and marketers to sell the public on the fuel vs. food myth, despite overwhelming evidence to the contrary.

The City of SF was honored appropriately and a few members of its biodiesel community were brought on to the stage by Jobe to begin the conference. Dr. Randall von Wedel of the biodiesel testing lab CytoCulture, received the NBB’s “Impact” award for his outstanding achievements in biodiesel; MUNI’s Marty Mallera, SF Fire Department’s Mike Ferry, SF Department of the Environment’s Vanadana Bali, and the SFPUC’s Karri Ving of the SF Greasecycle program, all helped to convert the city to biodiesel and make Mayor Gavin Newsom’s B20 mandate a reality. Panelists during many of the NBB’s sessions included Tellurian Biodiesel CEO and SF Biodiesel Access Taskforce Chair Eric Bowen, Community Fuel’s Ryan Lamberg, Jennifer Ratke of Berkeley’s Biofuel Oasis and myself as the Director of Green Depot.

This conference had it all; debates on feedstock issues, sustainability, quality, calculating life cycle analysis and indirect land use assessments, the latest diesel vehicles, and saw a showcase of some of California and the country’s best and brightest biodiesel pioneers. Ben Jordan, founder of the Biofuels Recycling Cooperative and architect of the SF Greasecycle, Hawaii’s Bob and Kelly King of Pacific Biodiesel, Jeff Plowman and Annie Nelson of the SBA, Kumar Plocher of Yokayo Biofuels, Colorado’s K. Shain, Dr. Dan Freeman of Seattle, Rachel Burton of Piedmont Biofuels, Biofuel Oasis co-founder Sara Hope Smith of Oregon and Biofuel Station’s Kimber Holmes who hosted the weekend’s Sustainable Biodiesel Summit. These folks had worked tirelessly and sacrificed much to see the grassroots biodiesel movement take it’s rightful place among the NBB.

Biodiesel Magazine’s Ron Kotrba observed in his web column this week that “the second of three general sessions was as moving as it was informative. The National Biodiesel Board shared the stage with actress Darryl Hannah and singer Melissa Etheridge, who are both passionate about using renewable energy and biodiesel. Starting the morning, NBB chairman Ed Hegland said the board’s goal is to have biodiesel make up 5 percent of the national diesel fuel pool by 2015, a plan called 5 x 15. “And we’re well on our way there,” he said. The theme of the day’s general session was sustainability, which Hegland called the “defining word of our time.”

Kotrba also wrote that Hannah, “a familiar face to regulars at the annual biodiesel event, gave a heartfelt talk to the audience about a documentary she’s been working on, regarding sex slaves and the international trafficking of minors for the purpose of selling sex. Her moving speech, which wasn’t read off a teleprompter but rather crumpled pieces of paper she held in her hands, went from human trafficking, to the state of the oceans, to the burning of rainforests, to the “toxic patchwork” of unsustainable agriculture, to biodiesel exports. Hannah said she knew a man who lived near a large biodiesel plant and he was excited to start using it, but couldn’t find any locally because all of the fuel was being exported out of the country. She said a situation like that needs to change; however, Jobe humorously cautioned that her views aren’t necessarily the views of the NBB.”

One of the most moving moments of the conference involved singer Melissa Etheridge, who performed during the conference’s second general session and according to Kotrba, “Gave a spectacular performance of her song, “If not now, when?” After the song, she told the audience the story about her rise to stardom, and once she made it there, she asked herself, is this it? After years of being a recording artist, her name being bought and sold from record company to record company – she jokingly said one day she found out unbeknownst to her she was the property of Seagram’s Gin – she felt like there should be something more. Shortly afterwards, she felt a lump in her breast and she was diagnosed with breast cancer.

Etheridge said after weeks and weeks of chemotherapy, lying in her bed the whole time because light hurt, sound hurt, she was taken to a higher place of awareness and understanding; similar to a monk who meditates himself to supreme enlightenment. “I started to understand what we are,” she said. Al Gore called her one day, she said, and asked her to “check out his slide show,” called “An Inconvenient Truth.” She eventually wrote the song for that documentary and won an Oscar. She then realized that in order to be healthy people, we need a healthy planet. “I asked myself, ‘What can I do?’” Later, she ran into Willie Nelson, who was heavily promoting biodiesel then, and the rest is history.”

Yesterday saw the closing of the conference and coincided with Mayor Newsom’s press conference about a new biofuel collection plan involving “brown grease”, in other words, the waste found in grease traps. Now even this waste can be turned into biodiesel. The biodiesel movement in San Francisco and California indeed rolls on, however many real challenges face this fledgling alternative fuel. There is the continuing debate on NOx emissions and how best to combat them; The California State Water Board still has issues with the “UST’s”, otherwise known as underground storage tanks. As of today, only blends of B5 biodiesel (5% biodiesel, 95% petroleum), are rated to be in them until UL, (Underwriters Laboratories), certifies them for higher blends. Meantime, biodiesel distributors are in limbo until a temporary agreement can be reached. The EPA, CARB, the California Biodiesel Alliance and the NBB continue to meet with the Water Board to resolve this issue; The petroleum industry, the grocery manufacturers and their lobbyists continue to fund “junk” scientists to try and debunk the benefits of biodiesel and continue their ill-conceived fuel vs. food fight. Lastly, some of the automakers are making the 2010 models more difficult to use pure biodiesel by making them even more petroleum diesel friendly. If they don’t change their ways, many states may act to ban those vehicles from being sold and send a clear message that all diesel vehicles must continue to be able to use biodiesel without any potential fuel injection issues.

One thing is clear. In July of 2008, the United States saw its oil supply reach “peak production”. That means from here on out, no matter how much we drill, or how many new provinces may yet be mined, we have reached our peak. We will never see oil production at those levels ever again. It is projected that the world’s peak production, (Including Saudi Arabia, Russia, South America, etc.), could reach peak production by as early as 2050. Until a new technologies, perhaps electric, can be perfected, the diesel engine is still the world’s best motor and biodiesel, of all of the alternative fuels, continues to have the best energy ratio and sustainability.

President Barack Obama understands this dilemma and has spoken about the need to use more biofuels. We really need to listen and heed his advice before it’s too late.

Eric “Doc” Smith is the Director of Green Depot, a non-profit that promotes the use of biodiesel in communities challenged by environmental justice issues. He is also Vice-Chair of the San Francisco Biodiesel Access Taskforce and a board member of the Biofuels Recycling Cooperative, architects of the SFPUC’s Greasecycle Program. He drives a 2001 VW Beetle that runs exclusively on biodiesel.