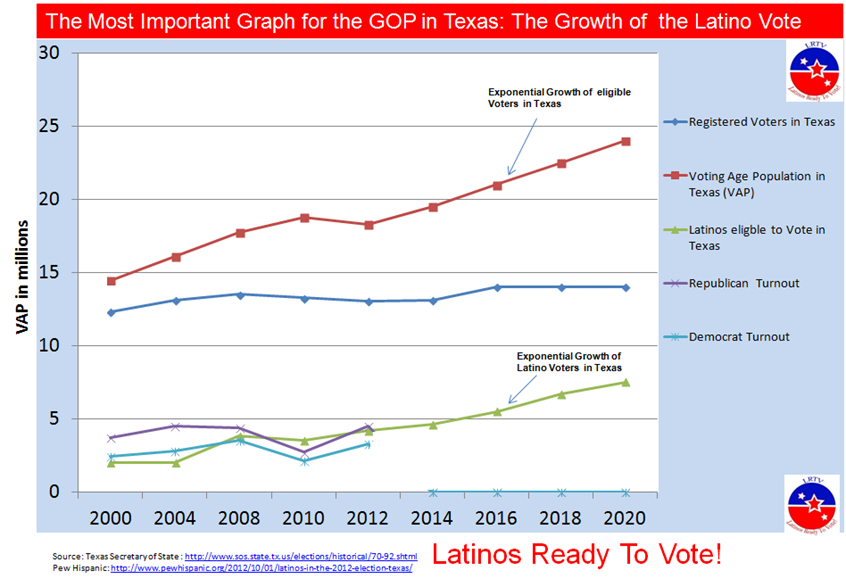 As the focus on Texas as a battleground state intensifies, the question increasingly on the minds of Lone Star State voters is this: Which John Cornyn will they see during the 2020 election cycle and is he electorally vulnerable?

Being known and running as a Republican moderate does not help Senator Cornyn in the Party of Trump. Cornyn realizes he also needs a significant slice of the Latino vote to get re-elected. Cheering for a border wall and having to defend every immigration-related tweet from the president threatens his re-election.

In Part 2 of our Texas series we look at recent polling data to better understand Senator Cornyn’s viability both in the primary and in the general—assuming he survives a primary challenge, that is. We look specifically at his political weaknesses and at the internal challenges he faces within his own party.

Finally, we provide snaphot of the Latino electorate in Texas—what it looked like in 2018, and what it may look like a year from now. A special emphasis is placed on the roughly 400,000 Latinos who will turn 18 before Election Day 2020. They were children when Donald Trump descended from the escalator announcing his candidacy, telling the world their parents were rapists and criminals. Trump was their introduction into politics.

Let’s start with the big picture: Poll data shows Cornyn is in trouble. Cornyn has struggled to keep his support levels above the traditionally safe threshold of 50 percent. According to a February Quinnipiac survey of Texas voters, he is less popular than Ted Cruz, who won narrowly two years ago during a midterm cycle when turnout is lower than in presidential cycles.

A more recent Texas Tribune poll from June shows Cornyn with an abysmal 37 percent approval rating, with 34 percent disapproving. For comparative purposes, that net +3 approval figure is lower among Texans than for both Trump and Cruz (+8 each). Although Cornyn’s approval numbers have improved slightly in the past few years, his approval remains net -12 among Texas independents.

Cornyn’s fellow Republicans recognize his vulnerability, which is why Cornyn may face a credible challenge for the GOP nomination next year. So far, perennial candidate Dwayne Stovall and the more credible Mark Yancey, a former owner of the WNBA’s Dallas Wings, have filed to run in the GOP primary. As evident from this recent video from a group of GOP voters in Tarrant County, that challenge is real. I can’t help but harken back to then-Lt. Governor David Dewhurst’s loss in the 2012 GOP primary to Ted Cruz.

While it remains to be seen how much traction any of these candidates gain, a challenge from a well-funded businessman like Yancey would force Cornyn to spend precious resources needed for the general election. With two GOP opponents now formally challenging him, Cornyn may be forced to participate in GOP primary debates. If there’s a silver lining for Cornyn, it’s that his intra-party opposition may be divided across multiple challengers.

In a tight, two-way contest between Cornyn and one of the two challengers mentioned above, Latinos in Texas could affect the outcome of the 2020 Texas Senate primary. And if Democrats can nominate a formidable candidate to take on Cornyn in the general election—a big “if”—Latinos will absolutely influence the outcome.

Consider the chart below, from a recent Latino Decisions analysis of Texas voting returns. It shows the sharp increase in potential Latino votes in the Lone Star State. First, notice that Latino turnout spiked from just under 1.1 million in 2014 midterm to nearly 1.9 million in the 2018 midterms. Texas played a very big role in delivering the highest midterm turnout rates nationally since 1914.

It’s the latent power of the untapped Latino vote, however, that holds the real potential to influence statewide outcomes.

In 2018, there were an estimated 1.7 million registered Latinos in Texas who did not vote, and another 2 million who are eligible but unregistered. In addition to these 3.7 million combined untapped voters, nearly 400,000 Latinos aged 17-18 will be eligible to vote for the first time in 2020.

Unregistered voters are toughest to mobilize to both register and then vote, of course. But if a significant slice of previously registered or previously age-ineligible Latinos who didn’t or couldn’t vote in 2018 show up for the 2020 presidential cycle, these Latinos could influence not only Texas’ electoral vote but the Senate outcome, too. (Not to mention a number of the hotly-contested House races, the subject of my previous Texas-themed post.)

With Beto O’Rourke repeatedly refusing to abandon his presidential bid and return home to face Cornyn, the Democrats may turn to MJ Hegar, a veteran who fought in Afghanistan and who lost narrowly to Republican incumbent John Carter in the 2018 TX-31 House race. There are also currently three other Latinos in the Democratic primary. With none of them having much or any name recognition, it’s easy to see how they split the Latino vote. For years, the rap on Texas was its lack of a Democratic bench. But with rising stars like Democratic House members Veronica Escobar (TX-16), Lizzie Fletcher (TX-7) and Sylvia Garcia (TX-29), each of whom could mount a serious challenge if they ran, anything is possible.

Cornyn enjoys a number of benefits. He’s an incumbent who will benefit from Trump’s support among hard-core Republicans. But Trump’s Texas fortunes have sunk since 2016: He trailed Joe Biden narrowly in the same recent Dallas Morning News poll that showed Cornyn’s low, 37 percent approval rating.

That means Cornyn in 2020 will be forced to perform a Texas Two-Step. He will first have to fully embrace Donald Trump to win the primary. Doing so, however, will force him to backtrack or dance around the immigration issue in the general or suffer damage among voters outside Trump’s base, especially the growing ranks of Texas Latinos.