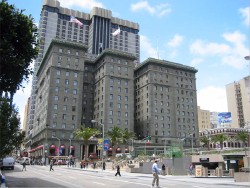 Was it the Giants’ superior pitching, hitting, and facial hair … or was it the Curse of the Westin St. Francis?

Clearly the Giants deserved to win the World Series, but we can’t help but wonder if the Texas Rangers were hurt by the baseball gods frowning upon their decision to cross Local 2′s picket line and stay at the boycotted Westin St. Francis hotel during their stay in San Francisco for the first two games of the World Series. How else to explain Cliff Lee’s inexplicable loss of form, Josh Hamilton’s silenced bat, or the Game 2 bullpen implosion that featured a pitcher throwing 11 straight balls and nine consecutive Giants reaching base with 2 outs?

In the past decade, the Red Sox laid to rest the Curse of the Bambino, and the White Sox finally put the ghosts of the Black Sox behind them. But the Rangers have yet to win a World Series, and by staying at the boycotted Westin St. Francis, they may have just brought upon themselves a curse that’s stronger than Babe Ruth’s and Shoeless Joe Jackson’s combined.

The Westin St. Francis has long been infamous in baseball circles. In Haunted Baseball: Ghosts, Curses, Legends, and Eerie Events by Mickey Bradley and Dan Gordon, the authors cite the hotel’s infamous past as the foundation for rumors among players that it is haunted. Al Jolson dropped dead there, Gerald Ford almost got shot there, and Fatty Arbuckle hosted a party that led to his being charged with murder and rape there. Veteran ballplayer Ellis Burks’ warns rookies about the story of the hotel’s haunted elevators: “He repeated a story that years ago, the elevator had suddenly dropped, killing all the passengers inside. The victims now haunt the confined glass booths that led them to their deaths.” C.C. Sabathia refuses to stay at the hotel when he’s in town for away games.

In 1916, the Curse of the Westin St. Francis changed history. Charles Evans Hughes, Republican candidate for president of the United States, was attending a banquet in his honor at the Westin St. Francis when, twenty minutes before dinner was to be served, the restaurant workers–members of one of Local 2′s predecessor unions–walked out on strike. (The workers were fighting for an 8-hour day.)

Hughes considered calling off the dinner, but made the wrong choice and crossed the picket line. When the workers discovered his perfidy, they campaigned hard against Hughes. The presidential election came down to California, which Woodrow Wilson won by 3,673 votes. The margin of victory was less than the number of union voters who turned out in San Francisco.

Crossing a picket line at the Westin St. Francis didn’t work out for the Rangers or Hughes. If you’re coming to San Francisco, can you be sure you’ll be any luckier?