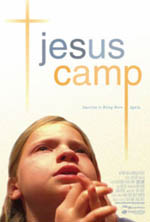 Move over totalitarianism: The Christian right can teach you a few tricks. If you want to see effective brainwashing in action, check out the new documentary about a Christian evangelical camp for kids that prepares the young innocent ones to lay down their lives for their faith. Called Camp Jesus, the film is an inside look at the “Kids on Fire” summer camp in Devil’s Lake, North Dakota. It’s run by Pastor Becky Fischer who’s obviously a wannabe Pat Robertson or Jerry Falwell. The hype for the film boasts of the daily goings-on: The children “speak in tongues.” They pray for an end to abortion. They condemn homos to hell. They are taught that they must take back our country for the Christian church and the Republican Party. They even worship before a picture of President George Bush.

If this camp were for Islamic children in Palestine or Beirut, right wingers in this country would be yelling “child abuse!” They’d be accusing Muslims of turning their kids into terrorists.

These children may not be strapping bombs on their backs and walking onto a crowded bus so that they can gain entry into an afterlife where virgins wait on them hand and foot. But like their fundamentalist Muslim counterparts, they’re being told that they have to be ready to defend their faith in any way they must.

It wasn’t that long ago that Christians did it for Jesus by slaughtering anyone who didn’t agree with them. If you take the body count from the Inquisition, the witch burnings, the pogroms, and the crusades just for starters, the numbers are staggering. There’s little about fundamentalist Christianity that’s not disturbing. It’s a cult with a single mission: spread the word at any cost. Save souls even if it means destroying them in the process. Forget civil rights, freedom of speech, choice in sexual expression or any of those other trappings of a free society. It’s their way or the highway.

When they weren’t killing people, Christians were busy keeping them oppressed and happy about it. Christian ministers in the south told slaves to “obey they masters,” as the Bible instructs. They forced women to remain at home barefoot and pregnant. They condemned integration and inter-racial marriage. They opposed queer rights, rock music and the teaching of evolution in the schools.

I confess that I haven’t seen the documentary. I’ve seen the trailer and read a lot about it. I don’t know if I have the stomach to sit through it. As an out and proud homo, I find it difficult to watch young minds being turned into fagbashers for the faith. It’s wrong to twist young minds before they have a chance to experience the world and decide things for themselves. Going to Catholic School was bad enough. Imagine being a gay kid at that camp. You won’t have to wonder any more why the queer teen suicide rate is so high.

Camp Jesus proves once again that Marx was wrong. Religion isn’t an opiate. It’s a poison.