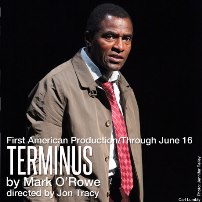 ‘Terminus’ is a tough talking play: “This samaritan shit’s the pits” – A guy from the brink of suicide with a gun implied at first, then admits that there might be a bullet through the head. It’s his plan.

This play is all about fear and grit. You feel that you might want to calm down, and get over it. Nope! I dread hearing things like a gun shot. And then – someone says “Got you, you gullible whore.”

This play is mired in messed up dialogue. The players never shut up. They talk constantly. Doesn’t anyone ever shut up? But, you keep wondering. Surely you think someone will take a breath of air.

No hope for that in this dreary space. The stage looks like dark ugly Shale and there is that constant fog hovering over the entire room. A girl called Helen is a F—king mess. She tells a tale about needing an abortion.

I have to warn you about this show. The acting is indeed the highest of qualities. Nothing to worry about there. But here is what is wrong with the play. No one really interacts with the actors. And though they may look out at the audience, they are not really part of us either.

However the salty words keep flying around: – “She got knocked up by some guy for one; she’s getting a taste for cunny, two.” “You know how those dirty dykes are. They are tough.” Someone says: – “Just turn back!” And wouldn’t that be wonderful? We could breath again.

There are three people in the cast. Are these people just mean – or are they insane. At times I have to tune them out as they engage in endless shit. How would you like to get a fist in your face? Its not nice. Not at all.

I guess the sleaziness causes me to get sick in my self-isolation. I must try to get over it – and hope to never see it again.

Someone after the show said that they saw at least one smile. Really? That must of been when I was out of hell for a few seconds. But if you want more – there is horns, worms and a prick. Of course it’s a male. What did you expect. I will mention again that the Actors are Superb — even though the show seems to be in another world – the brief suspension made my eyes close now and then. Opening only to see that the clouds are still there. She is still waiting for Satan.

This play has the Dramatic Tension of a Crime Thriller. But there is this question: ‘Who are these people really? Look at the world around us. Did it change the way you want it to be? This one doesn’t!

All in all – it’s full of darkness. But it is masterful storytelling.