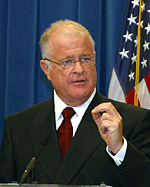 Democratic leaders in Sacramento have proposed an initiative to expand term limits that will allow members to serve up to 12 years in either the State Senate or the State Assembly. But after Frank Russo of the California Progress Report pointed out that it would still prevent State Senate President Don Perata from running again, lawyers at the firm of Remcho, Johansen and Purcell rushed to tweak the proposal.

Now the initiative, as re-written, has created a loophole for the powerful East Bay Democrat – who is already the longest serving member of the State Senate, and whose political career has already been extended due to a charitable legal interpretation of existing law. If the much-needed term limits reform is seen as a transparent move to expand Perata’s tenure, chances of passage are slim.

In September 1998, Don Perata first ran for the State Senate in a special election. Ron Dellums had retired from Congress in the middle of his term – setting off a chain-reaction of special elections that allowed Barbara Lee to vacate her Senate seat. Perata was serving his first term in the State Assembly, as he faced off in a crowded race against Assemblywoman Dion Aroner, Alameda County Supervisor Keith Carson, and other minor candidates. Carson and Aroner were both Berkeley progressives in the Dellums-Lee mold, whereas Perata was a moderate, pro-business Democrat from Alameda.

Predictably, Aroner and Carson split the progressive vote – allowing Perata to squeak into first place with 33% of the vote. It was an extremely low-turnout election (15%), where even habitual voters in the politically conscious East Bay did not remember to vote. Aroner came within 900 votes of beating Perata, who took an insurmountable lead among early absentee voters.

Under state law, if no candidate in a special election gets a simple majority, a run-off must be held. But Section 10706(a) of the California Elections Code does not specify that the runoff must be between the top two finishers; instead, it requires a run-off between the top finishers of each political party. Because Aroner and Carson were both Democrats, only Perata made it to the run-off – where he faced token opposition from the Republican and Peace & Freedom Party candidates. Needless to say, Perata won that race handily.

Legislators get ahead in Sacramento by raising gobs of money for their colleagues, and Perata’s connections to big developers helped him gather clout and influence in the State Capitol. He also moved his home base to Oakland – where he has considerable power with local legislators and has been under investigation by the FBI for corruption charges. After the 2000 Census, Perata helped re-draw the district boundaries – carving for himself a new Senate district that was less progressive. He took out El Cerrito, and put in Dublin and Livermore.

As Perata planned to run for re-election in 2004, it was an open question if he would be disqualified from running because of term limits. The current law limits State Senators to serving only two terms – Perata had been first elected in the 1998 special election, and then re-elected in 2000.

For purposes of the term-limits law, a Senator is considered to have served a “term” if they served more than half of a regular four-year term. Perata did not take office until December 1998 – just barely after the halfway mark of Barbara Lee’s unexpired term (1996-2000.) But after he won a plurality of the vote in the September 1998 election against Aroner and Carson, everyone knew that he was the de-facto State Senator.

In 2003, Perata got an opinion from Attorney General Bill Lockyer (a long-time Perata friend) who declared that because he did not take office until December 1998, he had not served two “terms” and was thus eligible to run again in 2004. Assemblywoman Wilma Chan tried to challenge this, and even got a separate legal opinion that made the opposite conclusion. But Chan threw the towel in when she realized her challenge wasn’t going anywhere, and Perata was allowed to run and serve for another four years.

Perata then got elected President of the State Senate. The legendary John Burton, who had served as Senate President for years and was an institutional powerhouse, was retiring – and Perata ran to replace him against Sheila Kuehl (a Santa Monica progressive) and Martha Escutia of Los Angeles. Escutia was going to be termed out in 2006, so she lost out to Perata because it was important to pick someone who was going to stay longer. And Kuehl didn’t raise as much developer money as Perata did — which is how she lost out too.

Now Democrats in the state legislature want to reform the term limits law, and will place the measure on the February 2008 ballot. Rather than limit Assembly members to six years (three two-year terms) and Senators to eight years (two four-year terms), the proposal would allow legislators to serve up to 12 years in one house or the other. Under this plan, legislators could build leadership skills in one house, develop institutional memory, and slow down the constant pressure to run for higher office.

Ironically, absent Lockyer’s ruling, the proposed initiative would have allowed Perata – like other State Senators — to serve an additional four years. But now, he will have served in the State Senate for ten years by 2008. Because the measure limits service in either house to 12 years, Perata would be ineligible to run for another term.

So on February 16th, the initiative drafters filed an Amended Version of the Term Limits Measure that deleted some of the language clarifying that a legislator can only serve a maximum of 12 years. It also added that if a legislator served less than half of a full term (i.e., Don Perata’s service from 1998-2000), that time would not be counted towards the 12-year cutoff. In other words, the amendments were designed so that Don Perata could serve as State Senate President until 2012.

There is no question that our term limits law is a mess. Legislators do not spend time on issues that matter because they are under constant pressure to run for higher office before their time runs out. More power lies in the lobbyists who have the institutional memory, and the Governor who knows that the legislative leadership that he’s negotiating with this year won’t be around soon.

But if voters view this as a referendum on Don Perata, it could kill the momentum to reform term limits. The best chance for term limits reform is to not have the change identified with any politician.