Tens of Thousands March for May Day Across Globe 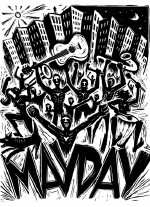 Tens of thousands took to the streets across the globe for May Day on Sunday, to press for workers’ rights amid tough economic times and to back an array of other causes.

Indonesian workers shout slogans during a May Day protest in Jakarta, Indonesia, Sunday, May 1, 2011. From Hong Kong to Indonesia and from Moscow to Paris, protesters marched and rallied in largely peaceful demonstrations for international Labour Day. In Russia, hundreds of thousands took to the streets in May Day rallies, most showing support for the Kremlin amid a handful of opposition protests. Anti-Kremlin rallies were far outnumbered by pro-government demonstrations organized by pro-Kremlin parties and trade unions.

Crowds waving balloons and blue or red flags gathered in cities from the Pacific port of Vladivostok to Moscow in carefully choreographed rallies reminiscent of the Soviet era when May 1 was one of the most important holidays celebrating international socialism.

In central Moscow, Left Front leftist activists urged Russians to follow the example of the Arab world and turn against their leaders.

The activists chanted: “Whether Cairo or Moscow, only through fighting will you obtain rights!”

In France, the far-right National Front (FN) kicked off its traditional “Joan of Arc” May Day march with a new leader at the head and under orders banning skinhead haircuts and jackboots.

The annual march is also timed as a Labour Day tribute to workers by the FN, which polls particularly well in depressed post-industrial regions.

Marine Le Pen, the daughter of the FN’s founder Jean-Marie Le Pen who succeeded him as its leader in January, drew applause as she took her place at the head of her march in front of Paris’s grand old Opera.

“Marine for president,” cried the crowd of several thousand. “Red, white, blue, France for the French!”

Separately, five major labour unions planned around 200 marches across France for Labour Day, including one in eastern Paris, to call for measures to tackle the rising cost of living while also condemning racism.

Thousands of workers also gathered at the famous square in the heart of Turkey’s biggest city Istanbul to celebrate May Day at the site where dozens were killed at a rally 34 years ago.

Waving colourful flags, dancing and chanting, the crowds marched onto Taksim square, the hub of the sprawling city of almost 15 million people, for a rally organized by four trade union confederations.

Until May Day last year, Taksim Square had been declared off-limits since the bloodshed during a 1977 May Day rally when gunmen, believed to be far-right militants aided by members of the intelligence services, fired on a peaceful crowd, killing 33 people and triggering mass panic. The attackers were never caught.

The government’s decision to reopen the square for May Day celebrations came after parliament reinstated the day as a national holiday in 2009.

Several thousand marched in Hong Kong in a noisy procession calling for stronger labour laws, even as the city best known as a glitzy financial hub introduced the first ever minimum wage for its legions of low-paid workers.

At least 4,000 people moved through the downtown area of the densely populated city, banging cymbals and drums in protest against fast-rising rents and food prices and shouting “Put an end to worker exploitation!”

In Seoul at least 50,000 workers gathered to chant slogans calling for higher pay and better job security and to slam the conservative administration.

“Our livelihood has been ruined by anti-labour policies, rising unemployment and a widening wealth gap for the past three years under (President) Lee Myung-Bak,” the Korean Federation of Trade Unions said in a statement.

Protesters in Indonesia called for better social security, turning out in their thousands — with some 10,000 security personnel in attendance — to shout slogans such as “the country is rich but the people are poor”.

“There is no social justice for Indonesians without social security,” said a statement from more than 60 labour unions.

In Greece, some 15,000 took to the streets in different cities to rally against austerity measures imposed amid the country’s economic crisis.

Greek unions have called for a general strike on May 11 to oppose the measures, but Prime Minister George Papandreou in his May Day message called for “everyone to support the big changes that the country needs.”

In Portugal, another country facing economic crisis, union activists said they hoped to draw 60,000 to 80,000 to the streets for protests against austerity measures expected to be imposed under a European Union and International Monetary Fund bailout plan.