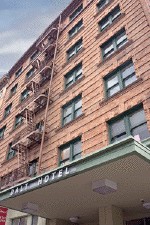 A broad coalition of Tenderloin residents, community groups, small business operators, and labor unions held a press conference yesterday in front of the Dalt Hotel at 34 Turk Street to demand the city address a shocking rate of crime and violence on the block. The Tenderloin Housing Clinic (THC) and Central City SRO Collaborative released a study, Taking Back Turk Street, that found that the number of sworn police officers in the Tenderloin has decreased at nearly four times the citywide rate since 2009, violent crime on the block has soared 35 times higher than the citywide violent crime rate and eight times higher than the crime rate of the Tenderloin at large. Many speakers asked why Tenderloin police staffing has fallen nearly 30% since 2009, and why illegal activities are permitted on the first block of Turk that would never be allowed in more affluent neighborhoods.

While much of the Tenderloin has improved in recent years (and the Mission’s homicide rate is dramatically higher), the first block of lower Turk Street is out of control. The block not only holds back progress in the Tenderloin, but the area’s proximity to Mid-Market also threatens the revival of that neighborhood.

THC director Randy Shaw, who joined with me in co-authoring the study, said that he was surprised and disappointed to learn that the city had slashed Tenderloin police staffing by 30% while citywide reductions were only 8% during the same time period. According to Shaw, “this is yet another example of the Tenderloin getting discriminatory treatment in receiving public services. Leroy Looper (owner of the Cadillac Hotel) used to always say that if we brought the folks freely selling drugs on our blocks out to Union Street, they would be removed within minutes.”

TNDC Director Don Falk, whose nonprofit owns the Dalt Hotel, noted the unfairness of subjecting Dalt residents to the public drug dealing on their block. Falk’s point was confirmed by an impassioned plea from Dalt Hotel resident Michael Arr. Visibly emotional, Arr stirringly railed against drug dealers “who aren’t from here, selling their drugs” out in the open in front of businesses and creating an unsafe climate for residents. Arr recalled having lost an air conditioning unit to gunfire, and called upon the City, local business leaders, and the police to do something about conditions on the block.

SEIU Local 1021 President Roxanne Sanchez spoke in support of the coalition’s demands, which were also backed by officials of the janitors union, SEIU Local 87, which is headquartered in the Tenderloin.

Among the small business people speaking at the event was John Duggan, whose Original Joe’s opened on Taylor Street around the corner from lower Turk in 1937. An owner of the recently opened 50 Mason Social House, and an ownership partner of the acclaimed farmerbrown restaurant, also spoke.

During the later press availability, the owner of Tenderloin Liquor, a business whose sales and illegal practices were challenged by the study, voiced an eagerness to work with residents in moving forward on common-ground solutions to help improve the block. The coalition hopes to meet with him and owners of nearby properties to discuss how they need to change their business practices and comply with city laws.