The Tenderloin Times and Future of Community Media 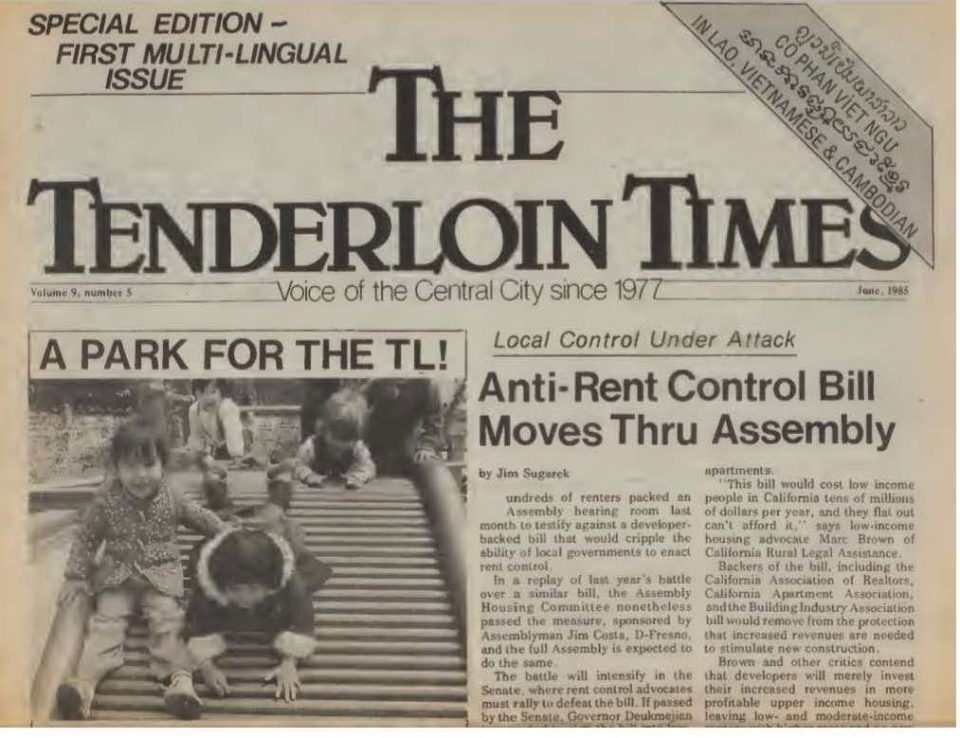 I drew extensively on Times reporting for my book on the Tenderloin and content for the Tenderloin Museum. The Times is a remarkable, only in San Francisco story that  arrivals to the city after 1994 probably do not know—which is why anyone interested in any of the above issues as well as the future of community journalism will want to visit a special exhibition on the Times opening November 2 at the Tenderloin Museum.

For tickets to the opening donor reception for the event, go to https://www.eventbrite.com/e/the-tenderloin-times-donor-preview-reception-tickets-38669497508

For tickets for the panel at 7 only: https://www.eventbrite.com/e/from-broadsheet-to-broadband-community-media-in-the-digital-age-tickets-39026748054

Silliman is an acclaimed American poet. His over thirty books have been translated into twelve languages. He brought a spirit of creativity, a counter-culture sensibility, and a very progressive political orientation to the Tenderloin Times.

Silliman also played a pivotal role in my own life because when I was a law student interested in opening a legal clinic in the Tenderloin I was told to contact Silliman. He suggested I call Leroy Looper, whose support for our plans led us to open the Tenderloin Housing Clinic in February 1980.

Sara Colm was the organizer who spearheaded the Tenderloin’s rezoning. She later became the Times editor and is the chief curator for the special exhibit, Voice of the Central City: The Tenderloin Times, 1977-94. The exhibit explores the Tenderloin’s past through two decades of reporting, and showcases rare archival images, articles, and political cartoons documenting the Tenderloin during its pivotal years of 1977-1994.

While the special exhibit continues through March, the November 2 panel offers a rare chance to hear from Times alumni Colm, Waters, and Lam about the nature of community journalism in the pre-Internet era. Colm lives in Virginia and does not get out to San Francisco that often so the panel offers a special opportunity to meet someone who played a critical role in Tenderloin history.

The Times published monthly. Can such a production schedule survive when news is constantly breaking and available online?  This is one of the topics the panel will be addressing.

Juan Gonzales, the founder of the Mission-based El Tecolote newspaper, understands this issue as well as anyone as his paper survived the digital era. Carrie Sisto, the Tenderloin Editor of Hoodline, knows the time pressures that the online media era poses for community news sites.

Do today’s community journalists yearn for the good old days when newspapers did not have to rush stories to ward off online competition? Or would Times’ staff have preferred being able to report news as it happened rather than when the new edition came out?

There’s a lot to ponder. Remembering the Times’ legacy on November 2 will be a joy even for those who never read the paper—it is an event and exhibit not to be missed.