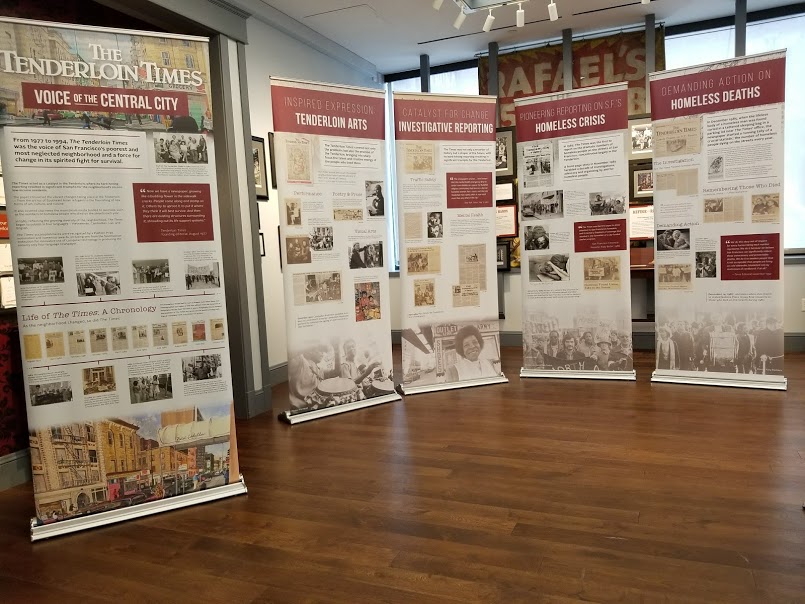 If you believe San Francisco has radically changed in the past 35 years, visit the Tenderloin Museum by March 30 (Now extended to April 15!) to see how some of the city’s key problems have remained. This becomes clear from a special exhibit, Voice of the Central City: The Tenderloin Times, 1977-94,

What was the Times covering? Headlines expose “10,000 Homeless,” a crisis in pedestrian safety, and a concern about public drug dealing on Tenderloin sidewalks. Many of the articles accurately describe today’s Tenderloin.

I drew extensively on Times reporting for my book on the Tenderloin and content for the Tenderloin Museum. The Times is a remarkable, only in San Francisco story that arrivals to the city after 1994 probably do not know—which is why anyone interested in any of the above issues as well as the future of community journalism will want to visit the special exhibition before it closes on March 30.

If this hasn’t convinced you, read Caille Millner’s moving piece on the exhibit in the San Francisco Chronicle.

Sara Colm was the organizer who spearheaded the Tenderloin’s rezoning. She later became the Times editor and is the special exhibit’s chief curator. The exhibit explores the Tenderloin’s past through two decades of reporting, and showcases rare archival images, articles, and political cartoons documenting the Tenderloin during its pivotal years of 1977-1994.

I gave a talk on the exhibit to some of our Tenderloin tenant leaders and was asked by one of our La Voz Latina leaders why the Times was not translated into Spanish. Great question. Today’s Tenderloin is roughly 20% Latino, and many are monolingual Spanish speaking. The Times’ exclusion of that translation may strike some as a grave oversight.

But as I told the leader, I did not even know a monolingual Spanish-speaking family in the Tenderloin in the 1980’s. I represented tenants in many if not most of the Tenderloin’s apartment buildings, and never needed a Spanish translator.

Southeast Asian residents began leaving the Tenderloin by the 1990’s, though many still remain. Latinos arrived after the late 1990’s dot-com boom left the Mission unaffordable for many low-income families.

The Tenderloin still has problems with pedestrian safety and public drug dealing but the neighborhood is far more vibrant and organized. There are more residents, owners and workers engaged in improving the quality of Tenderloin life than ever before.

Reading the Tenderloin Times stories posted in the exhibit is like taking a time machine back to Remembered San Francisco—-it is an exhibit not to be missed.