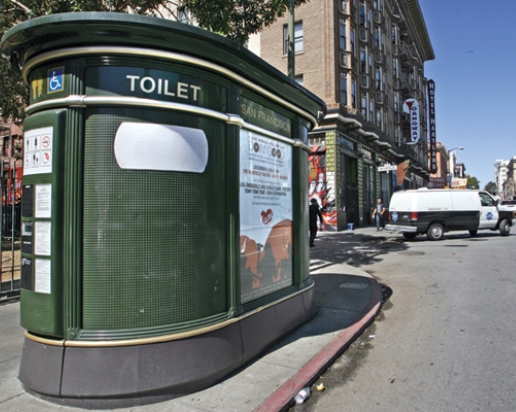 Many residents view toilet next to park as a problem

The intersection of Larkin and O’Farrell bustles on a weekday afternoon. Commuters mingle with residents of nearby apartment and SRO hotel buildings. Modest numbers of children shriek and dash around Sergeant MacAulay Park, named for John MacAulay of the SFPD who was fatally wounded in 1982. Considering that nearly 4,000 children live in the neighborhood, this park should be busting at the seams. Why isn’t it?

Larkin Street may be an up and coming area of San Francisco where one can still afford to live while making less than $100,000 each year (in fact The SFist featured it in a sort of essay portrait just the other day), but drugs are likely the most lucrative business in the stretch. Individuals using and dealing illegal substances abound. More concerning, stabbings and shootings are, if not common, too frequent for comfort.

I am a community organizer with the Central City SRO Collaborative and work with residents at the nearby Edgeworth Hotel. One resident brought up the park to me as an issue of serious concern to him. Even though his building is primarily seniors, the residents have been assaulted and robbed at all hours of the day and night. “How do the children feel?” he wondered aloud to me.

La Voz Latina, a group organizing Latina families in the Tenderloin, conducted a survey of roughly 90 families with small children. The results were unsurprising. The majority of families reported using the park, but said that they felt unsafe doing so. They go to the park during limited hours of the day, when the most people are around, and make sure that they are home well before dark. Without other nearby open space, the families simply put up with the anxiety.

Resident organizers with La Voz Latina have eloquently described both the fear of violence and the element of hurt that stems from knowing that stabbings occur regularly between young Latino men.

The public restroom outside Sergeant MacAulay Park provides a public yet private space—that is, it is open to everyone and used almost entirely by those who want quiet place to get a fix. Residents have expressed dismay over the presence of the bathroom and plan to brainstorm solutions to this issue at the community meeting we will hold on Thursday, August 14th at 5:30 PM at the Tenderloin Recreation Center (570 Ellis Street).

Through interviews with the company that operates the public restroom, we have learned that this bathroom receives only 580 uses each month, compared with an average of one to two thousand uses each month at identical bathrooms around the city.

The SFPD have worked diligently with the community to brainstorm and use the tools they have to make the area safer—but there is a long way to go. We are looking for community groups and individuals to join with us in making the park safer for children in our neighborhood by helping to host events in upcoming months. Please join us at the community meeting or contact us for more details.