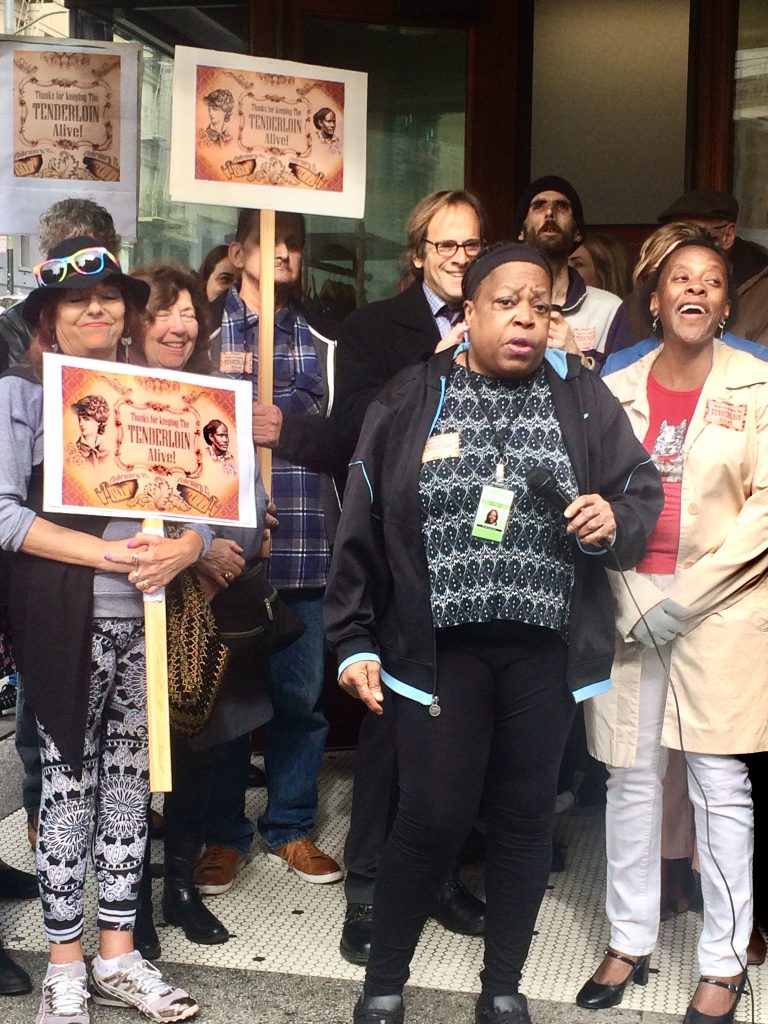 The Tenderloin’s best qualities were on display on February 15 as more than 50 residents and employees of the Tenderloin marched through the streets to show their pride for their community. The day marked the 100th anniversary of the City elite’s failed attempt to shutter the neighborhood and put a lid on the progressive, feminist values it embodied.

Though moral reformers and city politicians succeeded in closing more than 200 Tenderloin businesses in 1917, it did not take long for the neighborhood to revamp itself and become a cultural and political flashpoint of the Prohibition era and the decades that followed.

Yesterday’s event honored the Tenderloin’s ability to bounce-back from many political and economic challenges throughout the last century and honored the residents, businesses and non-profits that have made the neighborhood strong and inclusive for all these years.

The event began with a press conference outside the Tenderloin museum, where representatives from the Tenderloin Housing Clinic, Cadillac Hotel TNDC, CounterPulse, and De Marillac Academy  spoke about the neighborhood’s unconquerable spirit. Brenda Washington, a tenant at the historic Jefferson Hotel, declared at the rally, “what a perfect time to celebrate our community’s survival” as she explained to the crowd that the city’s Land Use Committee just approved over 60 units of affordable housing at 180 Jones Street, a project that neighborhood residents spent two years trying to secure.

Following the press conference, participants marched down Eddy Street and visited local non-profits and businesses to thank them for their contributions to the neighborhood. They visited arts venues Piano Fight and CounterPulse, as well as low-income housing sites like Franciscan Towers and the Drake Hotel. Leaders of the march thanked staff at these sites for their quiet, but critical work, keeping the neighborhood vibrant and affordable. 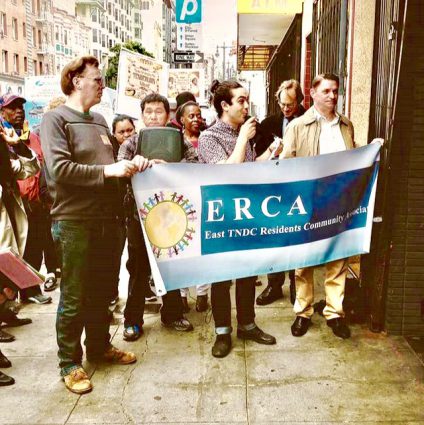 As they marched, the crowd kept the energy high with chants like, “Spread the news all around, they can never shut us down.” A march was an especially fitting tribute for this neighborhood that has played host to so many critical social movements over the course of the last century. In speeches, leaders of the march honored past members of the sex worker’s rights, LGBT and tenant’s rights movements that have contributed so much to the history of this neighborhood.

Yesterday’s event offered locals a chance to reflect on the improbable history of their neighborhood. In the last hundred years, the Tenderloin has frequently been deemed “beyond repair” or “soon to be transformed beyond recognition” and yet, despite many obstacles it remains a predominately poor and working class neighborhood with an increasing number of permanently affordable housing units and new and exciting local businesses. Given the perseverance of its residents and the positive direction it’s headed in, all indications suggest another century of a strong and inclusive Tenderloin.