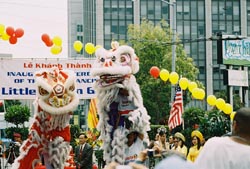 The Little Saigon District was first established as a Vietnamese cultural and community center in the Tenderloin in September 2003 in a resolution adopted by the Board of Supervisors. Representatives from the Vietnamese American community established the Committee for the construction of San Francisco Little Saigon Gate back in 2004, but the project took almost four years to complete due to construction and financial challenges. The pillars themselves are two marble statues of traditional Vietnamese dragons, surrounded by some of the finest Vietnamese restaurants in the city.

Along with Mayor Newsom and Supervisor Daly, representatives from the offices of Mark Leno and Nancy Pelosi were in attendance and were joined by Supervisor Bevan Dufty, Tenderloin police Captain Gary Jimenez and City Administrator Edwin E. Lee. The crowd was mostly comprised of the local Vietnamese American community, Tenderloin residents and surrounding business owners.

The local mainstream media also was in attendance, a rare occurrence in the Tenderloin, as it seems they only cover stories that negatively represent the district. Many residents and local business owners are excited about the Little Saigon district designation because they feel it will increase the number of tourists and businesses in the area.

The Little Saigon Gateway is the latest effort by the city of San Francisco and the local community to change the identity of the Tenderloin to reflect a more positive and prosperous image. The Gateway not only represents the history and culture of the surrounding Vietnamese community but also serves to proclaim that the Tenderloin is home to many different communities, and is not simply an area of vice.