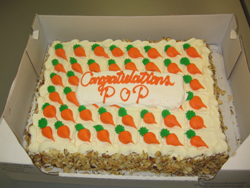 After a long community struggle to demand that the Tenderloin get a full-service post office, the US Postal Service announced plans on May 14th to expand their bare-bones facility at 101 Hyde. Last night, Post Office Patrons (POP) – a group of P.O. Box holders – gathered to celebrate this victory. For this group of Tenderloin residents, a neighborhood post office is a crucial milestone – after getting evicted from the US Court of Appeals building nearly 20 years ago. For this group of P.O. box patrons, the dignity of having a full-service post office is all that they’ve been asking for.

Until the Loma Prieta Earthquake in 1989, the ornate US Court of Appeals building at 7th and Mission also housed the City’s Main Post Office – where SRO residents rented P.O. Boxes to receive mail, as well as General Delivery service for homeless people. Daily lobby hours were from 6:00 a.m. to Midnight. But when the court renovated in 1991, the court wanted that space for an exercise facility – kicking out the P.O. Box holders.

The current location at 101 Hyde Street opened up in 1991 – and the Postal Service has slowly downsized its operations over the years. Today, you can’t even send out mail from that facility – and last year they removed the vending machines to buy stamps. All you have now is a series of P.O. Boxes for regular patrons to pick up their mail – while the neighborhood complains that the building is an eyesore and a place for loiterers.

Box-holder Michael Nulty emceed last night’s festivities – where Post Office Patrons, Senior Action Network and the Safety Network received awards in recognition of their work to make this happen. Nulty described the campaign to get a full-service station – with a February 14th hearing at the Board of Supervisors. “We brought Valentines for the Supervisors,” he said, “because our post office wouldn’t let us mail them out.”

“One thing that helped motivate the Post Office,” said Elaine Zamora of the Tenderloin Community Benefits District, “is that we gathered 1,000 signatures in just three months.” She explained the next steps: the Postal Service plans to open the full-service station by the end of the year, and will construct two service counters that will be staffed. Zamora added that she’s looking into grants to pay a muralist to decorate the building’s exterior – provided there are no legal constraints from the Postal Service’s side.

“They’ll have to eliminate some mailboxes to convert the station,” said Zamora. “But only ones that are not currently utilized – so no customers will be affected.”

Federal law signed by President Bush mandates that the Postal Service make a profit on its operations – which affected the decision to expand the facility at 101 Hyde. At last night’s event, one person suggested that to ensure a good market the Postal Service should notify everyone living in the 94102, 94103 and 94109 zip codes by postcard that they’ll be having a full-service post office. “People in the neighborhood won’t use it if you don’t tell them about it,” she said.

When I got home right after the event, I received a free promotion in the mail from the Postal Service’s new “Stamp by Mail” program — where you can mail them a check and have your stamps delivered. The promo even included a “no postage necessary” form to send back. If the Postal Service can afford that, surely they can send out notifications to Tenderloin residents about the new post office.