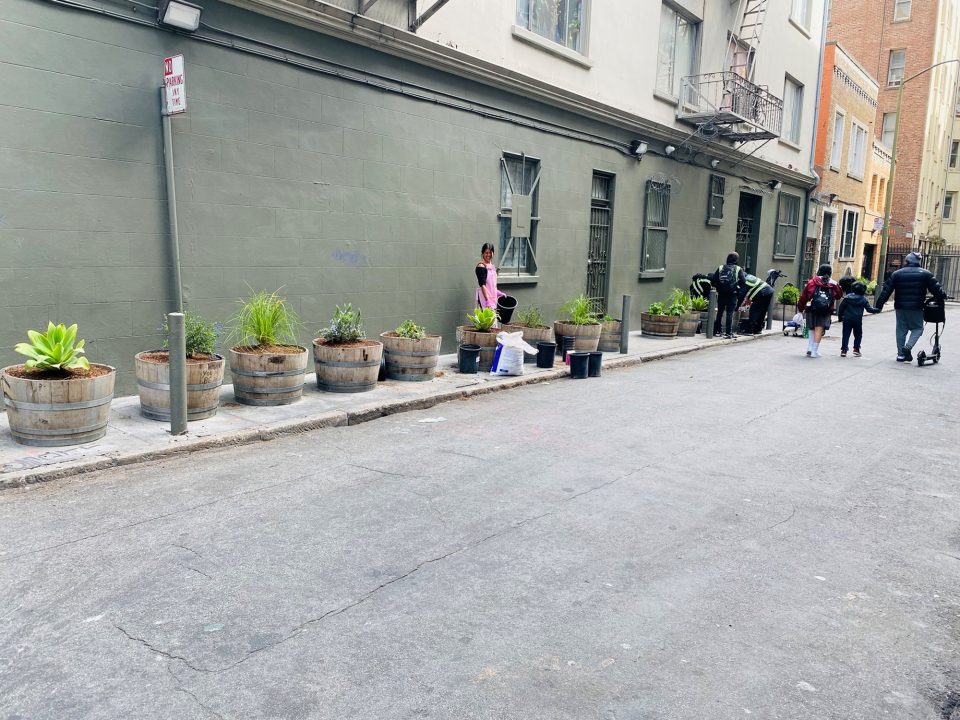 During the pandemic, Dodge Place off  Turk between Hyde and Larkin became a drug dealer safe zone. Residents of the alley were trapped in their homes. Today, it is a peaceful home for the many families living there. On April 7 Dodge Place hosted a block party with music, gardening workshops, and refreshments.

That’s how Dodge Place was taken back from the dealers.

Many blocks, including 200 Turk, have similar stories. Overall, the Tenderloin has noticeably improved since twenty officers were added to the neighborhood three weeks ago.  But  City Hall still allows open air drug dealers after 9pm when both Urban Alchemy and police are gone and before 11am when police arrive.

More resources are needed to fill these gaps.

Mayor Breed and Chief Scott will decide this week whether the Tenderloin will get to keep the additional officers that finally arrived as the Emergency Order ended. It comes down to a core question about the Tenderloin’s future: Will City Hall apply a single standard for “acceptable” levels of drug dealing in all neighborhoods? Or will our political leaders justify lower standards for the Tenderloin by claiming (falsely) that “this is how the Tenderloin has always been.”

Tenderloin drug dealing has been far worse since 2020 than ever before. The Tenderloin long had dealers but nothing like what exists today.

Mayor Ed Lee took office in 2011 vowing to revitalize the Tenderloin. Lee pushed for the opening of new housing, restaurants, bars, cultural and entertainment venues. He brought more investment into the Tenderloin than in the prior fifty years.

The Tenderloin was on the path to a transformative revitalization when the pandemic hit. But COVID 19 reversed the neighborhood’s progress. Mayor Breed  let the SFPD return the Tenderloin to its prior role as a drug dealer containment zone. The SFPD allowed Tenderloin drug dealing to get far worse than ever before.

Now Chief Scott blames staff shortages for allowing open Tenderloin drug dealing to continue. But no  Chief has ever told an affluent neighborhood that the SFPD could not keep its residents safe.

That’s what the SFPD means when it says it lacks staff to protect Tenderloin residents and small businesses. It says it has higher priorities based on the affluence of the neighborhood, not the severity of the ongoing daily crimes.

This strategy makes the most sense to many of us but Chief Scott has yet to accept it becoming a sustainable plan.

The police have recently been far more visible. But they are often on blocks Urban Alchemy has already protected. A more collaborative police strategy would prioritize drug dealing areas where Urban Alchemy is not posted, like the 600 block of Eddy and the north side of the 400 block of Eddy.

A lot of concern has been expressed about the impact on the Tenderloin of redistricting. I wish everyone expressing these feelings about the Tenderloin’s future would raise equally strong alarms about what is happening in the neighborhood right now. We need more voices demanding City Hall stop open drug markets in the Tenderloin. The media is getting tired of the “drug dealing in the Tenderloin” story and absent ongoing protests will simply move on.

We also continue to need supervisors from across the city speaking out about the double standard for public protection that puts working-class Tenderloin families at greater risk. We can’t allow district elections to eliminate responsibility for open air drug markets from ten of the eleven supervisors.

The Tenderloin’s power has always resided in those living, working, and running small businesses in the community. That combination brought all of our great victories in the 1980s’ (detailed in my book). The transformation of Dodge Place is consistent with this historical legacy.

It’s time for Mayor Breed and Chief Scott to announce which way they will go with the Tenderloin’s future. With support from City Hall and the SFPD, the Tenderloin would resume its path toward becoming the thriving neighborhood it deserves to be. Absent support from the mayor and City Hall, the Tenderloin will become a monument to San Francisco’s hypocritical commitment to equity.