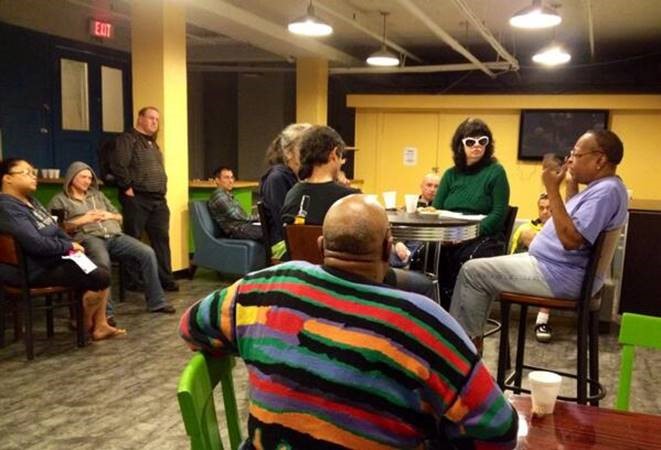 When her two older sisters left home, 15-year-old Brenda Washington began caring for her two younger brothers, babysitting nieces and nephews and cooking for the family.

And the standards were high; things had to be done just right. “My dad was military. We were saluting kids. The nickel had to bounce off the bed.”

Mostly, she wanted to please her stepmother. Washington’s own mother died when she was five. Her older sister, 12 at the time, took over cooking and childcare. Her father soon remarried, but her stepmother, a Jehovah’s Witness, was also very strict. And she didn’t work – or cook or clean. Meanwhile, her father and his new wife went on to have five children. By the time Washington took over household duties, she was seeing to 10 siblings.

“I wanted my stepmother to be happy so she wouldn’t complain to my father.”

And her stepmother was good to them in many ways: “She dressed us nice and combed our hair,” she said. She volunteered the children to work at the church, and if they were good, every other weekend, “we got to do something special, like play miniature golf.” 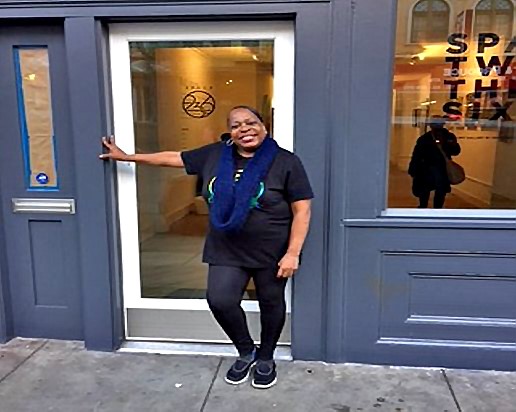 The San Francisco Board of Supervisors honored Washington in 2016 for her work as team leader of the Jefferson Hotel residents. (Photo courtesy of Beyond Chron.)

Despite his absences for Navy duty, his sons and daughters – even the neighborhood children – loved him. When he wasn’t in the area, Washington said, “every week, the Post Office would deliver a package from my dad. He sent us so many toys, we gave them to the neighborhood kids.” When he wasn’t posted elsewhere, “he worked like a dog, two or three jobs, but when he came home, he always played with us – monopoly, cards. He was the best!”

Washington was two months old when her family relocated from Seattle to San Francisco. Her early years were difficult, she said. They lived all over the city and, she said, and described her younger self as “a mischievous child, always getting into trouble and breaking things – my arms, legs, wrists.” At five, she spent nine months in the hospital with severe burns from a match-lighting contest gone awry.

That same year, her mother died in childbirth from a brain tumor, leaving Washington’s 12-year-old sister in charge of the family. She remembers the Red Cross bringing food.

Six months later, her grandparents – after selling their farm in Texas – moved, along with her aunt and uncle, to San Francisco to care for the families. They rented two units in the Alemany Projects. “We’d run from one apartment to another. “I was a kid; I didn’t know what was happening. I didn’t trip on it.”

A single mom of two

Her father had retired by the time Washington graduated from McAteer High School. She didn’t have a career plan, but knew it was time to move out and find work. A year later, she gave birth to a daughter and began a series of temporary jobs to support the two of them. “We lived at 21st & Valencia, Every Sunday we would skate over to Golden Gate Park. It was like our private playground. Afterwards, friends would come for dinner at our place.” 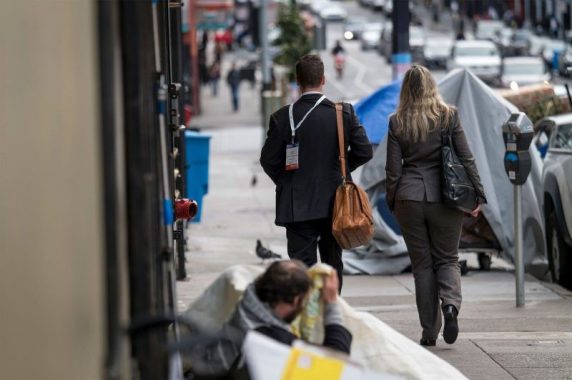 Pedestrians walk past the homeless in the Tenderloin. (Photo courtesy of David Paul Morris/Bloomberg. Jan. 13,2020)

But Washington became addicted to crack. She sent her daughter to live with her grandmother, spending the next many years on the street and in single-room-occupancy hotels in the Tenderloin, a long-bedraggled neighborhood at the perimeter of the city’s downtown business, hotel and shopping districts. Tourists, shoppers and club hoppers share the sidewalks with the poor, the homeless, immigrants, ex-cons and drug dealers and users. 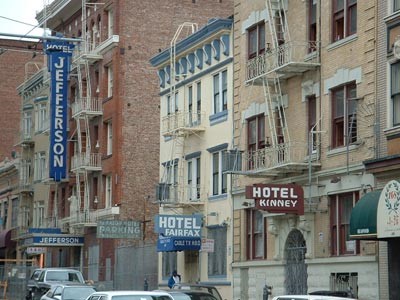 A stretch of Eddy Street in the Tenderloin, home to the majority of the city’s aging, single-room-occupancy hotels. (Photo courtesy of Central City SRO Collaborative.)

It also houses the majority of the city’s remaining one-unit, shared bathroom SRO hotels, which once housed gold prospectors, seafarers, seasonal fruit and vegetable pickers and other low-wage workers or transients.

“Broken windows, no hot water, sometimes no water at all, walls with holes so big you could see through to the next unit,” she recalled. “I had never lived that way.”

Tenants complained to the city Department of Building Inspection, but resolution was slow in coming. Individual tenants had little influence, given their stays were limited to 29 days (32 since 2017) – an effort by the city to increase the availability of rental units for low-income residents while not kicking in rent control laws. “Some hotels allowed you to leave your stuff, others made you take them,” Washington said. “A lot of people had shopping carts which they’d push around until they could move back in.”

A big shakeup leads to healing

At 29, her habit landed her in jail, where she gave birth to her second child, a son. Released the same day the Loma Prieta earthquake hit, she was determined “to get clean and take parenting classes to get my son back.” But crack was not an easy habit to break. Her children stayed with their grandparents while Washington struggled on the street.

Nine years ago, she moved into her longtime boyfriend’s unit in the Jefferson Hotel, an SRO on Eddy Street. And she began caring for others again. 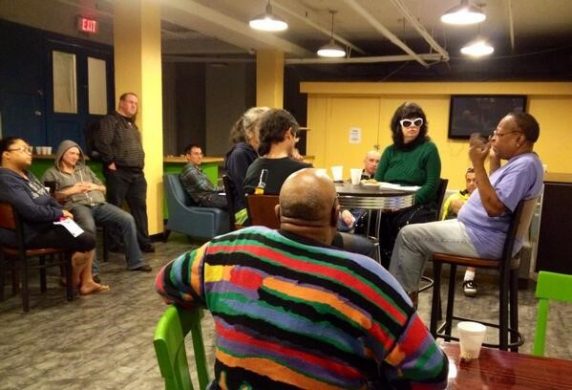 Washington, far right, leads a meeting of residents at the Jefferson Hotel on Jan. 27, 2014.

“When I moved in, something just clicked, I began taking care of the people in the building. When something wasn’t right, I dealt with it. The hotel manager loved me,” she said. He chose her to represent the building in the Central City SRO Collaborative. The collaborative comprises representatives of 22 hotels in the Tenderloin and South of Market neighborhoods who organize tenants to advocate for better living, sanitary and habitable conditions – in the community as well as the hotels.

Washington and her partner, Ronald, decorate a tree in the Tenderloin. (Photos courtesy of Brenda Washington.)

She thrived in her new role. “Whenever the collaborative organized an action in the community, the people in my building came out,” said Washington, who received a small rent reduction for her work. “We were selected the best building in the collaborative for three years. We made things happen.”

Washington distributed pamphlets and flyers about citizen’s rights and community resources and helped tenants resolve their problems and conflicts. “My door was always open.” Meetings and parties – with food, of course – helped build a sense of community.

The SRO Collaborative, a project of the Tenderloin Housing Clinic, also tried to make it difficult for drug dealers to operate in the Tenderloin. Working closely with Mayor Breed and local supervisors, who recognized Washington’s contributions, “we convinced the city to remove some bus shelters in because they provided a haven for drug dealers. Then we got the city to replace the dim streetlights with brighter lights.”

And the caring continued, along with the cooking. She worked for restaurants, events at the Moscone Center, Gator’s Back Porch Catering food truck and Jelly’s by the Ball Park. “I was a sous chef; I never wanted to be out front,” she said. “Macaroni and cheese is one of my specialties.” She also helped prepare monthly dinners for the SRO Collaborative.

A member of the Senior Vitality Program at the Curry Senior Center, Washington received an iPad and learned how to use it to record and monitor her health. A nutrition coach introduced her to new recipes, though having cooked for so many people with diabetes and other chronic conditions, she has years of experience creating menus with vegetables, whole grains and beans, and avoiding high-fat milk and cheeses.

Three years ago, Washington’s name came to the top of the city’s Moving On Initiative housing list for a Section 8 apartment, and she and her partner moved to the Outer Mission. Moving On finds apartments and provides the rent subsidy that allows tenants who no longer need or want the onsite services available in SROs to relocate to private sector housing.

While she likes her apartment and enjoys living in a quiet neighborhood where nobody is “hanging out on the street corners,” she misses her friends in the Tenderloin. “My new neighbors are friendly. We talk and share food and look out for each other, but it’s not the same. You walk out of your apartment, you’re on the street. It’s not like we can socialize in the hall or lobby.”

A new challenge, a new home

So, at least twice a week, Washington travels to the Tenderloin to visit and volunteer with the SRO Collaborative: packing goods for its food pantry, handing out air quality flyers and cooking meals for its events. “Because I don’t live in the neighborhood, I couldn’t be an organizer anymore, so they made me events coordinator,” she said. “I call it Old Ladies duty.”

In 2005, Washington felt a lump in her breast. “I was scared and didn’t want to go to a doctor.” But her sister Karen kept calling and nagging. “I finally made an appointment. She saved my life.”

After a lumpectomy, chemotherapy and months in recovery while she lived with her sister in Oakland, Washington returned to San Francisco where she began participating in the breast cancer support group facilitated by the Shanti Project, a nonprofit providing peer support and guidance to people affected by HIV/AIDS, cancer, and other life-threatening conditions.

“God has plans for me,” says Washington.

But in 2012, her cancer returned – more chemo, more surgery and recovery. As she awaits her next mammogram, “everything is on hold.” She’s scared and when she gets down, she remembers a lesson from her father: “When you’re depressed, keep moving and get past it. It’s a formula; figure it out.”

And she finds comfort in knowing she still has people to care for and cook for. As she says in “Now is the Sunshine,” a short video about her cancer, “God has plans for me.”