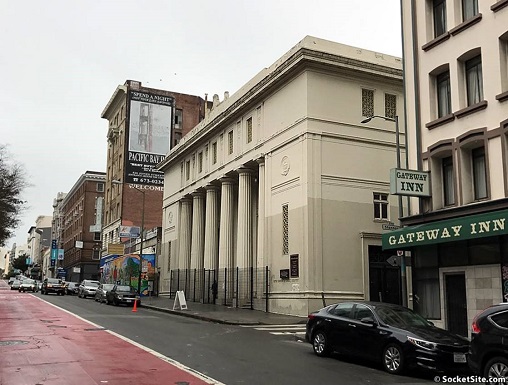 450 O'Farrell is surrounded by SROs

Developer: “We will offer classes to teach people how to eat properly.”

The Tenderloin Housing Clinic (THC), Tenderloin Neighborhood Development Corporation (TNDC), Market Street for the Masses and neighborhood residents are opposing a destructive housing development that is now scheduled to go the Planning Commission on February 4. The 450 O’Farrell project would replace a 176-unit family housing development approved in 2019 with a 302-unit project that resembles a student dorm.

Most units in the approved project averaged 1075 square feet, with the vast majority over 712 square feet. In contrast, the revised plan is for 330 units divided between 350 and 550 square feet. The cooking facilities in the smaller ones are limited to two burners. The units will have two to three beds depending on the size of the unit.

Right. A police officer earning over $80,000 is going to live in a 550 sq ft Tenderloin apartment with two other people. Or in a micro-unit without even a full stove. We asked some officers about this prospect—they found it ridiculous.

While the original project addressed the Tenderloin’s desperate shortage of family housing, the new plan adds housing for single adults where there is already a neighborhood surplus.

The Tenderloin was arguably the nation’s first hotel and apartment district. Its historic housing stock was built between 1907-1930 and is overwhelmingly comprised of SRO hotel rooms and studio apartments. There are some one-bedroom apartments but two and three bedroom units are rare.

This unit mix prioritizing single adults worked from 1907 to the 1970’s because the Tenderloin had few children. This changed when Southeast Asian refugee families began filling the neighborhood in the 1970’s and 1980’s. Most lived in overcrowded studios. I represented many families facing eviction for having too many people in the units where they had been resettled. We got the city to allow the overcrowding so long as families signed up for public housing; but to this day far too many Tenderloin families lack adequately sized housing units.

The neighborhood’s family population grew after rising rents in the Mission during the late 1990’s caused a huge Latino family influx into the more affordable Tenderloin. Many Arab-American families live here as well, as many parents work in SEIU Local 87 and UNITE HERE Local 2 which are headquartered in the neighborhood.

Yet despite the Tenderloin’s large population of kids its housing stock remains dominated by housing for single adults. There are very few two-bedroom apartments outside those built by nonprofits. Waiting lists for such units are extremely long.

Tenderloin children need affordable housing. This has been a priority for decades. But builders understandably have favored small units either due to lot size and/or increased profitability. Forge Development is building two huge micro-unit projects at 145 Leavenworth and 351 Turk lot on an extremely dense block for the neighborhood.

The developer’s argument for eliminating the family housing approved for the site is that in this economic climate only micro-units can get financing But 550 O’Farrell, less than a block away and approved by the Planning Commission last week, offers exactly the type of market-rate project the Tenderloin needs to house families with children. It will have 111 units: 35 one-bedrooms, 62 two-bedrooms, and 14 three-bedrooms. Unit sizes start at 500 square feet and go beyond 1000 square feet.

The sharp contrast in unit mix between the nearly adjacent projects pulls the curtain back on what is really going on here: The radical change in the proposed unit mix at 440 is not caused by financing issues; rather, micro-units are the only type of housing this developer wants to build.

The Tenderloin has no shortage of housing for students. Hastings is building a 14-story housing project across the street from my office at Golden Gate and Hyde. Nobody in the community opposed that project. And Forge’s two micro-unit projects under construction in the Tenderloin will also likely house students.

But a successful neighborhood must have housing for families with children as well.

Almost no housing sites (those not already slated for development) in the Tenderloin remain. We cannot allow a project we counted upon to provide desperately needed family housing to become another site for single adults. SROs surround the project site; nobody claims there is a shortage of single-adult housing in the area.

The community now needs the Planning Commission to again do what is best for the Tenderloin. And that requires rejecting this project. The developer should revise its plans or sell to someone who will build something at least close to the original unit mix. That’s what the community counted upon in backing the original project and what the Tenderloin still needs.