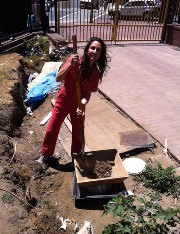 On October 24th and November 7th, conceptual artist Ilana Crispi invites the public to sit on, drink from, and eat out of Tenderloin dirt transformed into ceramic vessels and furniture. “Most people demonstrate visible disgust at the idea of touching the ground here. I want to challenge that stigma and help people feel a direct connection to this soil,” shares Crispi, who lived and taught in the Tenderloin.

Food grown atop Glide Memorial Church will be served in Crispi’s dirt creations — attesting to the vibrant and verdant promise of the Tenderloin. “We are excited to be involved with Crispi’s urban transformation and to share our abundant autumn harvest of heirloom greens, edible flowers, and tomatoes as well as honey from our rooftop beehives,” says Lindsey Dyer of Glide Foundation’s Graze the Roof. Crispi chose to serve local food because “There’s so much hiding beneath the surface in this neighborhood, even nature in spite of the concrete.” she explains.

Crispi single-handedly excavated 90 gallons of dirt for this show from sites like Tenderloin’s Boeddeker Park, where she taught art to neighborhood kids. At that time, Crispi’s students could not use the soil because the park was littered with needles and a prison-like fence was needed to address the number of bodies found in the mornings.

“I want people to experience a beautiful version of this place. People once picnicked here among dwarf oaks and blackberry bushes. Now there’s no green space.” reminds Crispi. Declaring a vista point where visitors are directed to stop, sit, look, eat, and drink “is a celebration of our neighborhood, past and present. She’s excavating the history of the Tenderloin through its dirt,” appreciates Frank Merritt, co-founder of Ramon’s Tailor.

Decades earlier, when the Tenderloin catered to the white middle-class and bourgeois, “people came together to enjoy theater, dance, skating, and bowling in the past incarnations of Boeddeker Park. Now the site’s dirt is being transformed again.

The Tenderloin — like the Fillmore, Western Addition, and Mission — struggles against losing its sense of place and Crispi’s project calls on us to deeply consider its rich history and future,” shares Betty Traynor of Friends of Boeddeker Park. Sarah Wilson of Uptown Tenderloin adds “We welcome contemporary artists like Ilana Crispi who engage with the community to shed light on the Tenderloin’s past.” After all, Crispi observes: “In the Tenderloin, much of the history of this place, like the dirt, is not visible.”