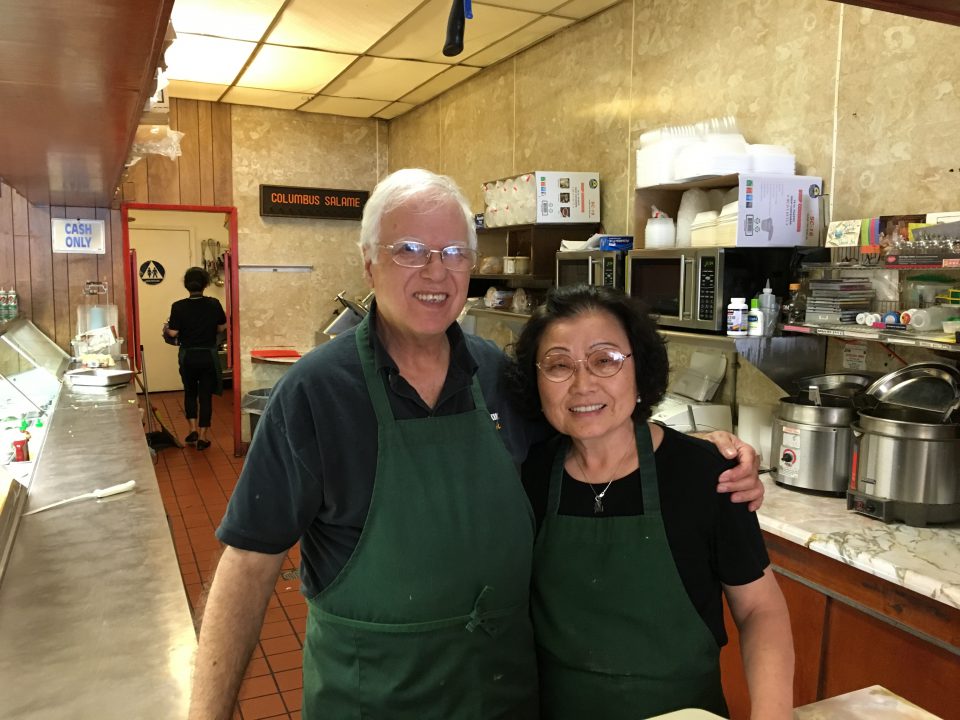 Ed Note: This is the first in a series on Tenderloin opposition to a city proposal that ignores geographic equity in the distribution of homeless services.

At 5 a.m. every weekday the owners of Turk and Larkin Deli open their doors as they have for 39 years.

Meatloaf, falafel and over 20 colorful salads fill the cold case as their regulars begin flowing in at 10 a.m. when the shop opens for lunch.

But for Mike and Jean Aburahma, a 24-hour homeless resource center slated to open two doors down from their deli comes as a shock for a business struggling to stay afloat due to escalating levels of drug activity on the block. And to top things they barely found out about it in time to do something about it.

“We found out about it in the newspaper,” said Mr. Aburahma, referring to a July 21 San Francisco Examiner article that broke the story. “We were shocked, the city never told us anything.”

Since 1979 the deli has occupied the same building in the same neighborhood, but much has changed. When the Aburahma’s were starting out the worst thing about the block were the “wino’s” who would get drunk out front.

Today, nested one block from Hyde Street and its bustling drug scene, Turk Street has emerged as a drug hot spot, a street some prefer to walk around instead of through.

Rory Little, a law professor at the neighboring University of California: Hastings College of the Law, has been eating lunch there for 30 years. He says many of his colleagues and students choose to walk the long way to eat at the deli instead of the more direct way through Turk Street. Little says it’s a problem encouraged by the city.

“The city’s given up on this neighborhood. I’m all for homeless services, but they’re driving out small businesses,” said Little. “They are centralizing all the services here…opposed to having regional homeless centers in the Marina, Pacific Heights or down by Twitter.”

“Everybody in the neighborhood is against it,” said Mr. Aburahma. “The grocery store, the bar, the printing shop, the Tenderloin Housing Clinic (which rents space from Aburahma next door), the senior citizen buildings next door, all say no.”

As neighbors of the proposed site, Mike and Jean were also surprised by the way they heard the news – from the news.

“We read about it in the newspaper,” said Mike, citing the July 21 San Francisco Examiner article that broke the story. “We were shocked, the city never told us anything.”

For small businesses on the block like the deli, Turk Street is a free-for-all. Smoking drugs, shooting drugs, selling drugs: all the above. But it’s the regulars keep the place afloat.

But it’s hard to get new customers on Turk Street. That’s why Mr. Aburahma was looking forward to the city’s Department of Homelessness and Supportive Housing occupying the adjacent building with offices. “They would have brought more business to me as well as nearby restaurants in Little Saigon,” he said.

Their most recent batch of customers took a year to start coming around from their 455 Golden Gate Ave. office building down the street.

The block’s sidewalk scene has mostly been a continual nuisance for deli owners. Most mornings they arrive at work, shoo people from in front of the door, hoping the people move on their own. Most times it doesn’t play out like that and police get called.

“They shit, pee, shoot needles and when they finish they throw the needles on the sidewalk,” said Mike.

He says he not angry at the people sleeping on street. He and his wife donate the leftovers to one of their tenants, the Coalition on Homelessness. He also feeds people on the street that he knows are sober.

Luckily for the deli, the regulars keep showing up for the house special pastrami sandwich despite the drugs and sketchy sidewalk scene.

“I know them all, that’s what keeps us going. We don’t have tourists or people from other areas coming here. All regulars,” said Mike.

Hastings Professor Little, who was eating in the deli when I interviewed Mike and his wife, said he’s seen small businesses recently pushed out by the same stuff that worries Mike.

“I’ve watched small businesses like New Style Hairstylist on Hyde…Tina is a Vietnamese immigrant who started that beauty shop 30 years ago. She just moved out of the neighborhood because she couldn’t get any relief from drug dealers sleeping in her doorway,” said Rory.

He added that while many students and teachers love the deli, most choose to walk the long way down Larkin Street instead of the more direct way through Turk Street.

The Board of Supervisors will decide whether to place the  homeless service center next door to Mike’s deli after it returns from  recess in September. After the city has encouraged investment in the Tenderloin, Mike and other business owners see the shift of plans from offices to 24 hour homeless services at 440 Turk as a disappointing return to “business as usual” in the neighborhood.

Garrett Bergthold is a staff writer for Beyond Chron.