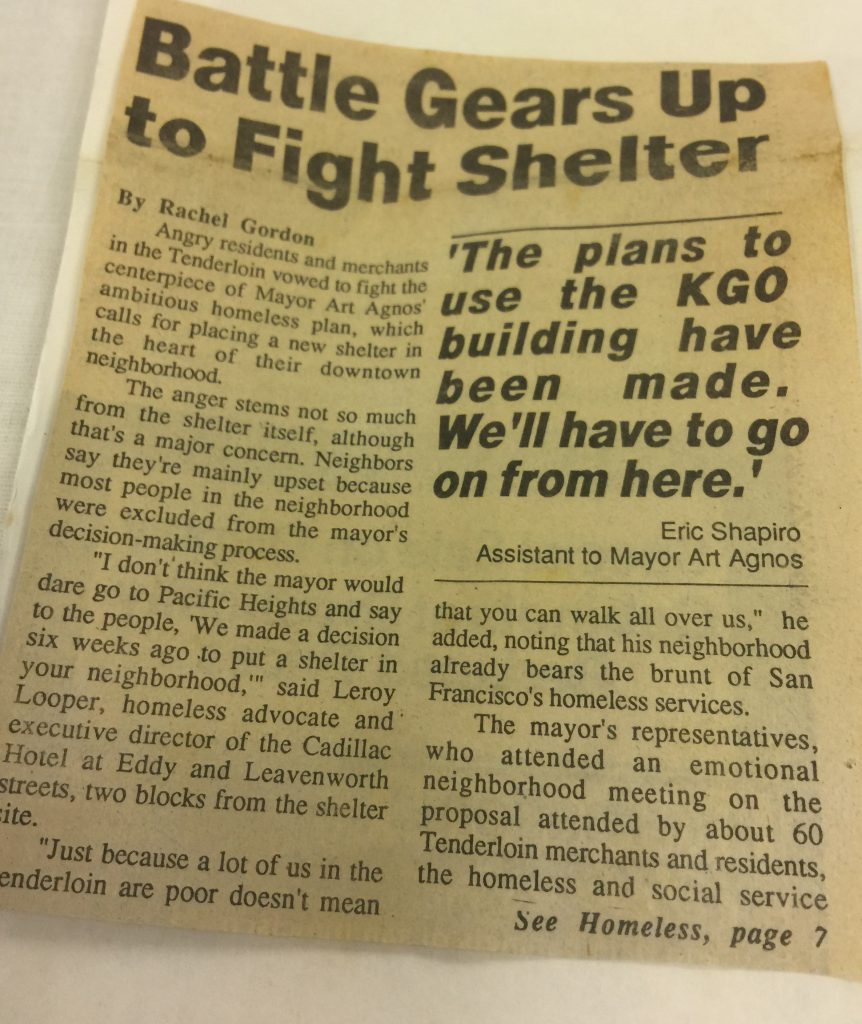 If San Francisco ignoring community input before opening a 24-hour homeless drop-in center in the Tenderloin sounds familiar, that’s because it is. In 1990, Mayor Art Agnos similarly bypassed the neighborhood in announcing the opening of a homeless shelter at the former KGO building at Golden Gate and Hyde (now the Lofts at Seven).

That shelter never opened. And if the Tenderloin’s voices are heard, this new plan will not happen either.

For the Tenderloin, it’s Déjà Vu all over again.

Since I learned of the city’s plans for 440 Turk on July 21 from the SF Examiner, I’ve been saying how Leroy Looper (who died in 2011) would be up in arms over this if still alive. I did not realize how right I was.

Looper’s wife Kathy recently uncovered a 1990 article (see accompanying photo) in which Leroy denounced the city for doing in 1990 what it repeated in 2017:  deny the same input to the Tenderloin on homeless services that it would provide other neighborhoods.

Looper put it beautifully: “I don’t think the mayor would dare to go to Pacific Heights and say to the people, ‘We made a decision six weeks ago to put a shelter in your neighborhood.’  Just because a lot of us in the Tenderloin are poor doesn’t mean you can walk all over us.”

Leroy Looper was my mentor and friend for nearly thirty years. He always put the Tenderloin’s interests first. He instilled in me a deep commitment to ensuring that the Tenderloin is treated with the same respect as other communities.

While Department of Homelessness officials apologize for a “lack of communication,” Tenderloin folks see this as Déjà Vu. Once again, the city  bypasses the normal community process when new homeless services are slated for the Tenderloin

The Tenderloin/North of Market Community Benefits District (TLCBD) wrote an August 24, 2017 letter to Mayor Lee and the Board explaining its unanimous opposition to the city’s plans for 440 Turk. Among its many concerns: “the lack of initial community outreach, the lack of transparency in revealing actual plans, and what we perceive as a general disrespect toward our Tenderloin community…”

The Tenderloin is sick and tired of being treated with disrespect.  People were fed up with this mistreatment in 1990. They are even more fed up that they are still being treated like a second-class neighborhood  more than twenty five years later.

The Tenderloin now has a museum highlighting its status as a neighborhood of national importance. My book on the Tenderloin shows how the neighborhood suffered unfair treatment from City Hall for decades, which contributed to its sharp decline.

But many felt a new chapter of Tenderloin history was being written with the Black Cat, Onsen Spa, Piano Fight, Exit Theater, 826 Valencia, CounterPulse and so many more establishments bringing richness to the city. Yet  some city agencies still see the Tenderloin as a place where community input can be ignored.

The second-class treatment of the Tenderloin is always a “mistake” or due to “poor communication.” No city official ever says they intentionally bypass Tenderloin input because the neighborhood lacks the angry homeowners who scare politicians.

At 440 Turk, its “mistake” allowed the  Homelessness Department to come within  days of getting what it wanted.

Had Supervisor Ahsha Safai not made a fuss over the drop-in center plans at a Thursday Budget and Finance Committee hearing where he was not even a member, the city’s plans for 440 Turk would have quickly been approved by the Board the following Tuesday.

D6 Supervisor Jane Kim was in no position to oppose the plans because she also had been kept in the dark. When she learned on July 21 what was going on she was as mad over the lack of input as anybody; Kim then held up the contract for the homeless services at the next Board meeting.

So the city almost got away with ignoring the Tenderloin community input that is now raining down on the Homeless Department’s parade. That’s why it is more important than ever that the 440 Turk plans for a 24-hour drop in center be stopped entirely.

If you have not read Leroy Looper’s remarkable life story, this might be a good time.

We owe it to Leroy’s memory to make the Tenderloin the safe and affordable community he never stopped believing was possible. A place that deserves the respect from City Hall afforded more affluent neighborhoods.