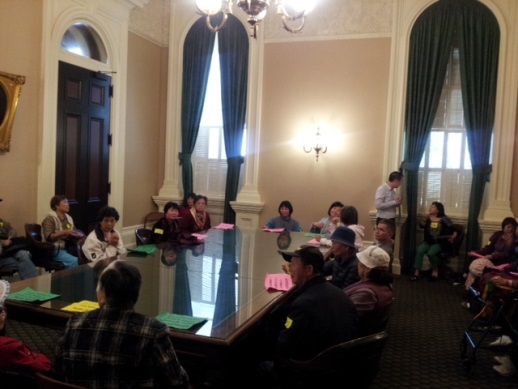 Ellis Act reform faced defeat on June 18 after Senator Mark Leno’s SB 1439 lost 3-4 in the State Assembly Housing and Community Development Committee. The bill, which would have prevented real estate speculators from Ellis Act evicting tenants within the first five years of ownership, just barely made it past the Senate a few weeks ago, and always faced a tough hurdle in the Assembly where other anti-tenant legislation has found support.

Proponents of the bill were outnumbered by mostly Chinese small homeowners from San Francisco to the hearing. Leno and others pointed out that they had no connection to the issues addressed in the bill. Assemblymember Yamada was particularly impressive, noting that she comes from a family of small SF landlords and that this bill did not impact that group.

“How can we legally differentiate between those who are abusing and those who are small mom-and-pop property owners who don’t want their right taken away from them?” Leno said. He highlighted the statistics that have found that Ellis Act evictions where not being done by landlords like those that were bussed in, but from speculators.

Despite countless rebuttals against claims that SB 1439 wouldn’t affect small property owners like those that attended the hearing, the strongest opposition came from within party lines. The vote saw two democrats, Cheryl Brown and Sharon Quirk-Silva, vote with two Republicans against the bill. In fact, it was Republican Brian Maienschein that seemed most sympathetic to the bill, though he ultimately voted against it.

The defeat brought a likely end to the fight at the State level, where for the past few months tenants have been going up to Sacramento to advocate for tenant’s rights at each step of the legislative process.

Mary Elizabeth Phillips, a 98-year-old tenant that is being evicted from her home on Dolores Street by real estate speculator Urban Green, made the long trip to Sacramento to testify. The group Eviction Free San Francisco, which organized a 200-person march through the Mission in April, has taken on her eviction case. Phillips has lived in San Francisco for over 70 years, and decried the evictions of seniors and elders like her.

“I never thought I would be evicted from my home,” Phillips said. Many seniors like Phillips are being targeted by speculators that see people like her as easy targets.

“The speculator had owned the building for about four months when they started evicting everyone,” she continued.

Her testimony highlighted the true costs of displacement in San Francisco, and the defeat of SB 1439 means that many more will remain vulnerable to Ellis Act evictions.

Assemblymembers Tom Ammiano and Mariko Yamada offered their strong support, but were unable to sway their fellow legislators.

“San Francisco, as you know, is a very populous city, we’re a hands on city,” Ammiano said. “This is a district bill.”

“This issue is obviously not going to go away. This has traction,” he continued. “What’s good for San Francisco is also good for the rest of the state.”

Mariko Yamada described the bill as balanced and reflected on the need to revisit and revise the 30 year old legislation. She also brought up her family’s experience of owning property, and called out the misrepresentation of the bill of affecting small property owners.

“This legislation, in my mind, attempts to simply close the loophole that is frankly being used against those who really do not have a voice in this discussion,” Yamada said.

Many of the criticisms offered by Brown and Quirk-Silva were less reflective of the bill itself and more of misunderstandings of the city’s political situation. Brown cited the city’s poor housing development policy for causing the housing crisis while Quirk-Silva mirrored Republican Maienschein’s call for San Francisco to resurrect its Redevelopment Agency. With just one vote needed between the two, neither could offer their support, and it will be unlikely that they will change their minds, as Leno was able to have the bill be put up for reconsideration.

Despite the setback for statewide Ellis Act reform, the constant push of grassroots tenant mobilization by groups like Tenants Together has changed the conversation in the State legislature, which has always been a tough place for tenant’s rights advocates.

“Every time we make our argument, we do move the issue forward, if only another inch,” Leno told the small crowd of 30 activists that came up with Tenants Together after the hearing.