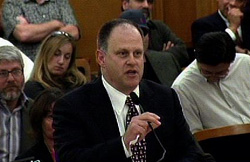 1856 Franklin Street is an 8-unit building purchased last year by limited liability companies owned by attorneys Andrew Zacks, Denise Leadbetter and other eviction profiteers. Immediately after purchasing, Zacks and company served eviction notices on all of the tenants. Next, Zacks sued the tenants, claiming that the owners did not need to comply with local law requiring relocation payments to tenants. Following Zacks’ resounding defeat in the Pieri v. CCSF matter, reported in Beyond Chron last week, Zacks has withdrawn the eviction notices served on the 1856 Franklin tenants, and dismissed the lawsuit against the tenants. This represents an important victory for the long-term tenants of 1856 Franklin who have steadfastly refused to vacate their homes since eviction notices were served in August 2005.

Zacks has pushed Ellis Act evictions as the answer to all speculators’ dreams, but some of Zacks’ clients have learned the hard way that converting larger buildings is tricky business. For example, speculators in North Beach (represented by Zacks) started trying to evict the tenants of 424-434 Francisco Street in April 2004, but the tenants successfully obtained an injunction against the evictions, and the tenants remain in possession of their homes today. TIC conversions in larger buildings pose numerous problems for speculators, including the fact that buildings of five or more units trigger state subdivision law requirements, and will never be permitted to convert to condominiums.

Zacks’ personal investment in this TIC project at 1856 Franklin suggests that he is desperate to show potential clients that Ellis Act evictions at larger buildings are easy and profitable. But the tenants of 1856 Franklin Street just made this more difficult for him.

In an obvious display of retaliation, Zacks has now served notices removing the tenants’ parking spaces. Recently, the tenants’ garden was torn out with no notice. The owners have turned the building into a construction zone without regard to the tenants’ right to quiet enjoyment of their homes. Apparently, because he is having trouble evicting under his beloved Ellis Act, Zacks is trying to drive the tenants out by taking away services and making life in the building as uncomfortable as possible.

Unfortunately for Mr. Zacks, he has messed with the wrong group of tenants. His abusive behavior has only strengthened their resolve.