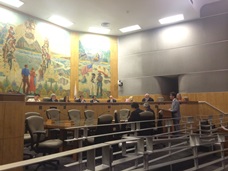 SACRAMENTO – The Senate Transportation and Housing Committee held its first hearing yesterday, April 8, on Senator Mark Leno’s SB 1439, which would create a five-year holding period before property owners can invoke the Ellis Act. With momentum building for Ellis Act reform, a strong contingent including Mayor Ed Lee, Tenants Together, and sf.citi testified in support of the bill. After brief discussion, the committee voted 6-4 to move the legislation to the Senate Judiciary Committee.

A report released last week by Tenants Together and the Anti-Eviction Mapping Project found speculators rather than mom and pop landlords were primarily evoking Ellis Act evictions. The study found that 80% of Ellis Act evictions were by those who owned property for less than five years, and 50% were from under a year of ownership.

“The reason we are here is because of a crisis situation,” Leno said at the hearing. “The Ellis Act is being abused, and this bill will restore for San Francisco the original intent of the Ellis Act.”

Leno’s bill specifically would address Ellis Act abuses that are plaguing San Francisco. Mayor Ed Lee released his plan to expand housing in February, and was present at the hearing to advocate for Ellis Act Reform.

“Our city is at the peak of a housing crisis, and it’s been years in the making,” Lee said. “That’s because unchecked speculators, those looking to take advantage of a hot real estate market, are taking advantage of our limited supply of housing.”

“To deal with years of underbuilding that our city has conducting, we have undertaken a comprehensive strategy to protect and stabilize and to build more housing in San Francisco,” Lee said. Lee’s strategy will build 30,000 units of housing by 2020, a third of which will be affordable housing.

“Part of our strategy must be to protect existing rental units,” Lee said. “We need this legislation to fill in a loop hole in the Ellis Act that is being abused in our city to the detriment of our long-term residents.”

Dean Preston, the Executive Director of Tenants Together, also testified for the need for Ellis Act reform. Before the hearing, a small rally was held outside the Capitol where speakers spoke of their experiences being Ellis Act evicted.

“It is an essential bill to stop evictions that are plaguing San Francisco,” Preston said. “This loophole must be plugged to prevent further displacement.”

“The misuse of the Ellis Act serves no purpose and does no legitimate need, but does enormous damage to renters and our communities,” he continued.

Ellis Act reform has garnered strong support from the tech community, and sf.citi representative Jeremy Wallenberg was present to testify as well.

“The technology industry has contributed to turning down the unemployment rate in San Francisco and with that, an affordability crisis has come as well,” Wallenberg said. “We think this bill will be critical to create a level playing field in the city.”

With a smaller crowd than the 500 tenants’ rights activists from February, the hearing was packed with opponents of mostly homeowners, but also a landlord lobbyist from Southern California.

Opposition in the state senate challenged the need for the state to intervene, when the local legislature was already responding. The lobbyists from Southern California were concerned that legislation passed in San Francisco would set precedence.