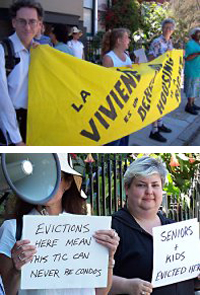 A group of Mission tenants staved off eviction this week, beating back an attempt to remove them from their homes with the Ellis Act. The residents of 2808-2818 Folsom Street include multiple seniors, several of them disabled, as well as multigenerational Latino families. Their landlords have been trying to remove them since 2004, but were stopped for the second time by the San Francisco Superior Court on Monday. The building’s owners filed a petition with the Rent Board claiming they had already issued eviction notices to their tenants at the time of the filing. This turned out to be untrue, and as a result, low-income and working class tenants achieved yet another victory this year against displacement through the Ellis Act.

The fight over 2808-2818 Folsom began in early 2004, when new owners purchased the 6-unit property. They immediately began working to evict their tenants with the Ellis Act, a state law increasingly used by speculators to convert rental units into tenancies-in-commons, by May of that year.

The courts dismissed these evictions after the tenants appealed, but the landlords attempted eviction once again in November of 2004. Since then, the building’s residents have been working to keep their homes, despite enduring what they claimed to be abusive treatment from their landlord.

Tenants say that one of the building’s owners, Mitch Hu, refused to make repairs, telling residents they had to pay for any fixes themselves. Another tenant said Hu took him to small claims court, suing for the value of a garage on the property because the tenant did not clear out their belongings fast enough.

The granting of the motion came as particularly good news to one of the building’s families, whose mother had been in and out of the hospital fighting a terminal illness. Family members thought an eviction might have been enough to end her life.

The news also came as a relief to Jaime Martinez, a 10-year resident of the building who lives there with his young daughter.

“Thank god we are not being evicted,” said Martinez. “It’s so good to hear, what with Christmas coming up. If I were kicked out, I don’t know where I could go.”

This victory represents yet another piece of good news for tenants battling Ellis Act evictions in 2006. Several previous cases, including 424-434 Francisco Street and 1357 Folsom Street have lent hope to tenant and low-income advocates in the face of increased use of the Act to displace San Francisco’s most vulnerable residents.